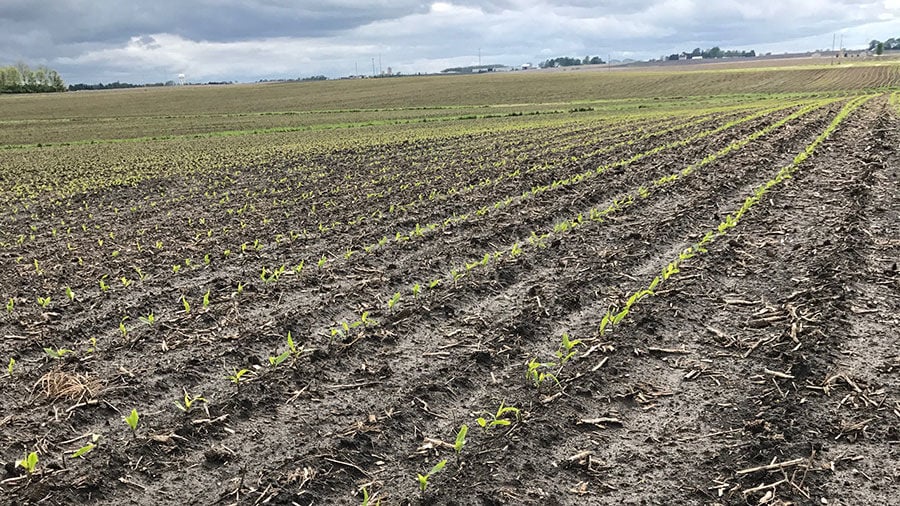 Editor’s note: The following was written by Scott Irwin and Todd Hubbs with the University of Illinois Department of Agricultural and Consumer Economics for the university’s Farmdoc Daily website April 24.

Wet conditions and a slow start to planting in 2019 has heightened interest in whether it is still possible to plant the corn crop in a timely manner.

Prospects for completing planting of the 2019 corn crop in a timely fashion depend on four specific factors:

The purpose of this article is to assess each of these factors and project the timeliness of planting the 2019 U.S. corn crop.

The first factor that will determine the prospects for timely planting of the U.S. corn crop is the percentage of the crop already planted. Given the cold and/or wet conditions experienced by nearly all of the Corn Belt this April, it is not surprising that the pace of planting has been slowed.

The USDA’s most recent weekly Crop Progress report indicated only 15% of the corn acreage in 18 major producing states was planted as of April 28, compared to 15% last year and a five-year average of 27%.

The second factor that will determine the prospects for timely planting of the U.S. corn crop is the beginning date for a significant late planting penalty for corn yields.

There is not complete agreement on the optimum planting window for maximizing corn yields or the date when late planting begins to impose a substantial yield penalty. Both the optimum window and cutoff date for a significant late planting penalty varies by geographic location.

For market analysis purposes, however, it is useful to identify one date for the end of the optimum window that can be applied to the entire Corn Belt.

In order to set the late planting cutoff date, we review information generated from agronomic research relating planting date to corn yields at the farm-level.

We begin with information presented by University of Illinois professor Emerson Nafziger, which he updated through the most recent 2018 results. Nafziger provided the data in the form of yield penalty by planting date in Table 1.

The yield loss in Illinois is minimized by planting in mid- to late-April. The yield penalties become increasingly large as planting is delayed after mid-May. For example, planting on or after May 20 resulted in a yield loss of 8.1%, or 17.1 bushels per acre.

Results from corn planting date research for different years and different locations throughout the Corn Belt vary, but the reported pattern of yield response to planting date is comparable.

We have previously defined the beginning date for substantial late planting penalties on corn yield in the U.S. to be May 20. One can certainly argue for an earlier cutoff date, e.g., May 10, in the heart of the Corn Belt.

However, we continue to opt for the May 20 date in light of the increasing corn acreage in the northwestern part of the Corn Belt and the later date of the optimal planting windows in these areas.

The third factor that will determine prospects for timely planting of the U.S. corn crop is the minimum number of days required to plant the U.S. crop. Note that this is simply stating the planting rate in terms of days rather than acres or percentage of the total planted acreage.

We found that producers in Illinois, Indiana and Iowa needed a minimum of 14 suitable field days, or two weeks, to plant the corn crop based on maximum daily rates of historical planting progress.

It is important to emphasize that this is the absolute minimum number of days required to plant the crop because it assumes that peak rates of planting progress can be maintained for all 14 days.

The fourth factor that will determine prospects for timely planting of the U.S. corn crop is the total number of days suitable for planting before the cutoff date for a significant late planting yield penalty, which we assume is May 20.

If we begin counting on April 25, this means there is a total of 25 days until the May 20 cutoff date is hit. Farmers are normally able to plant about half the time during this time window.

Wet conditions in much of the Corn Belt have hampered corn planting progress so far in 2019. This has led to concerns that more than the average percentage of U.S. corn acreage will be planted late.

Computations using historical distributions of suitable field days indicates there is still sufficient time remaining to plant the 2019 U.S. corn crop in a timely manner (before May 20).

However, these distributions do not account for the fact that topsoils are saturated throughout a considerable part of the Corn Belt due to heavy rains in recent weeks and months.

We show that wet topsoil conditions at the start of the crucial April 25-May 20 planting window substantially diminish the likely number of suitable field days during this window because it is hard for topsoil to dry out with normal precipitation and temperature.

The bottom line is that the current wet topsoil conditions in the Corn Belt do not bode well for planting the entire U.S. corn crop in a timely manner.

A reasonable estimate is that late corn planting in 2019 will be at least 5 to 10% above average.