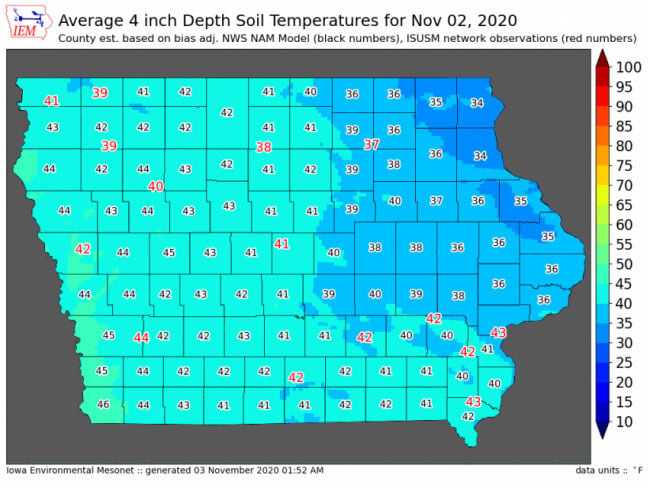 Soil temperatures at the 4-inch depth across the state of Iowa for Nov. 2. 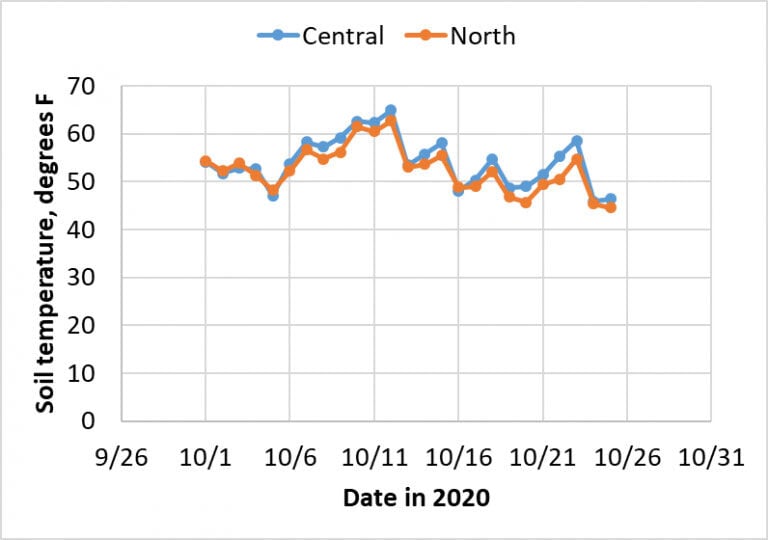 Soil temperatures at the 4-inch depth across the state of Iowa for Nov. 2.

Nitrogen applied as anhydrous ammonia in the fall is an effective source of N for the corn crop, but is also a little more subject to loss compared to N applied in the spring.

One of the main factors that determines how much of the fall-applied N is subject to loss is how much of the ammonia converts to nitrate (is nitrified) in the fall and early spring, before the next planting season.

One way to slow nitrification of fall-applied ammonia (which converts quickly to ammonium in the soil) is to add a nitrification inhibitor. The other way is to wait to apply ammonia until soil temperatures are low enough to limit the activity of the bacteria responsible for the conversion to nitrate.

Scientists have studied the effect of soil temperature on nitrification rates for decades. Estimating how quickly ammonium is converted to nitrate in the soil turns out to be complicated, but like most biological processes, it takes temperatures close to freezing to stop the nitrification process completely.

Adding the ammonium as anhydrous ammonia also increases the pH and kills a large number of bacteria, effectively delaying the start of nitrification by days or weeks, with longer delays when soil temperatures are lower.

Because nitrification still takes place (slowly) at 50 degrees, why don’t we wait until soil temperature is less than this — say 45 or 40 degrees — before starting to apply ammonia?

Waiting until 50 degrees to apply ammonia is a compromise that produces some opportunity to apply at all during seasons when harvest is delayed, soils are wet, or soils freeze early. It takes advantage of the delay in nitrification caused by ammonia itself, and of the fact that soil temperatures continue, at least on average, to drop over time.

Managing the risk of having substantial nitrification following application means taking into account both current and predicted soil temperatures when deciding when to apply fall nitrogen.

Drier soils tend to limit nitrification some, and they also warm and cool more quickly as air temperature changes.

We don’t want to use either maximum or minimum, so often take soil temperature at 10 a.m. and 4 inches deep under bare soil as an estimate of daily average conditions in the ammonia band after application.

That might not seem like a lot, but it is in the range of what we measure as tile line nitrate loss following fall (compared to spring) application, and even if temperatures are normal over the next six weeks, more nitrification will take place.

With the lag period already over, early application of fall N also means that the nitrification process is primed and ready to go whenever soil temperatures allow.

The good news is that air temperatures averaged a few degrees below normal in October this year.

We know from records that soil temperatures can rise into the 40s and even into the 50s during the winter, so waiting until soils are cool before applying ammonia doesn’t rule out further nitrification.

The fact that periods of heavy rainfall before soils are frozen or after they thaw can result in spikes in surface water nitrates tells us that some nitrification always takes place between fall and spring. Some nitrate that moves from fields is present in the soil at crop maturity, either from unused fertilizer or N mineralized from soil organic matter after plant uptake stops. But some also comes from fall-applied N.

We can minimize this by careful management and can largely eliminate it by moving application to the spring.