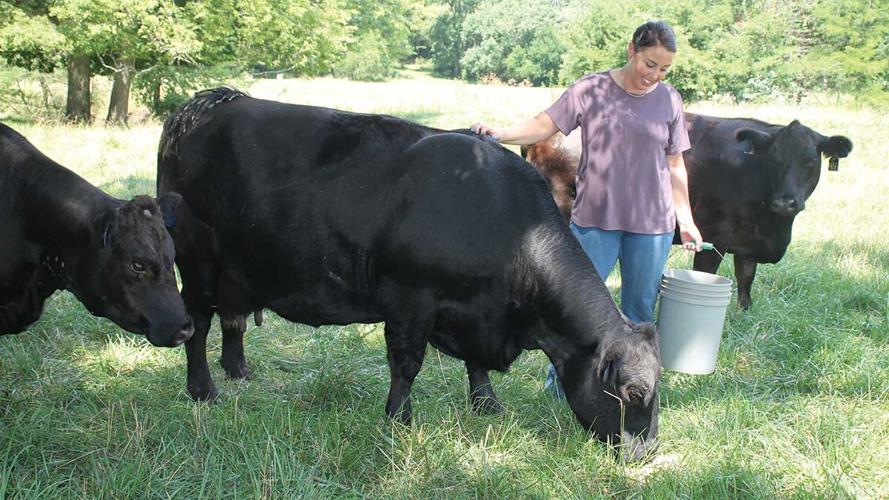 Cori Malone is following in her mother’s and grandfather’s footsteps as a seedstock producer. In the future, Malone said she expects even fewer people working in agriculture will have come from generational farms like her. 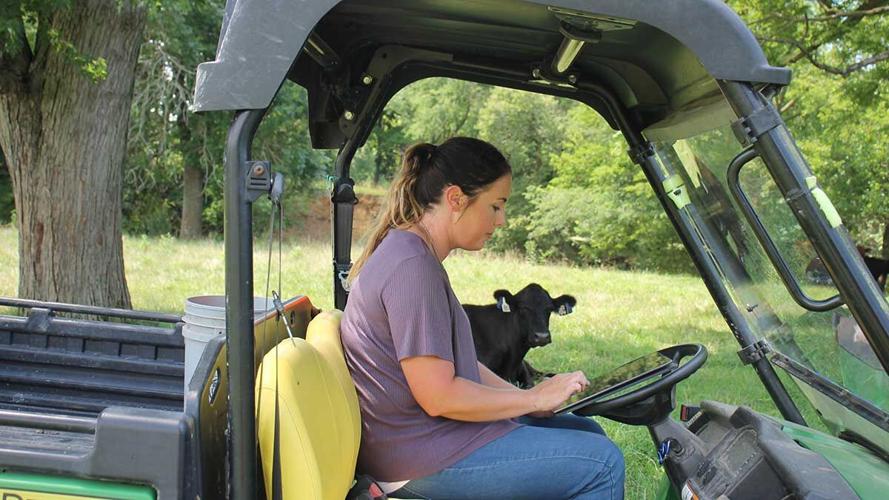 Cori Malone checks her iPad as she visits cattle on pasture in Tazewell County in central Illinois. Her operation is a mix of modern tech and lessons learned from generations past.

MINIER, Ill. — With a future muddied by pandemic impacts, recession worries and global conflict, young farmers are setting their paths in agriculture with a mixture of practicality and hopeful optimism.

One of them is a 34-year-old central Illinois cattle producer, university academic advisor and animal science lecturer. She sees three things — embracing technology, connecting with consumers and building on the past — as ways to propel farming into the future.

“We use the past to propel us forward along with the core values of the generations before,” says Cori Malone, while sitting on a utility vehicle in her pasture with a laptop in hand.

She eyes the national award winning cattle herd her family has developed as she discusses her path forward using modern technology in breeding and health care.

She is inspired by what she learned from her grandfather, Mike Schmidgall, and her parents, especially her mother, Joan Harrison, who leads the farm day to day in central Illinois.

The love of cattle bonded this mother-daughter pair.

“Mom taught me how to breed a cow,” Malone says with a smile.

Both her dad and husband work full time on ag-related off-farm jobs. Her dad, Bill Harrison, is retail business manager at Growmark, Inc. in Bloomington Illinois. Ryan Malone is a livestock nutritionist. Joan Harrison was an agriculture teacher at Olympia School District in rural Stanford until she became the full-time lead on the family farm.

Along with seeing more women in agriculture in the future, Cori sees more kids who grew up in urban areas interested in agriculture careers today. Many of the students she works with at Illinois State University are from Chicago and suburban areas.

“There’s a place for everyone in agriculture,” said the fifth-generation farmer.

She tells students who don’t come from farming backgrounds not be by intimidated by others who start with more generational knowledge.

There is so much students can do in agriculture, from working in business to designing apps to making better use of land, she said.

Malone shares with students how hard work in the industry helped her reach her career goals. Throughout her youth, winning state and national showmanship scholarships helped her earn ag degrees at Oklahoma and then Illinois State University, where her professor soon recommended she apply for lecturing and other roles in the ag department.

“I love sharing my ag story with students,” she said. “It’s very hands on.”

Malone and her mom raise about 76 cows in a Limousin with Simmental herd in central Illinois, with national winners among their seedstock production. They sell about a dozen show heifers a year. They also grew their local meat business to meet demand during the pandemic and sell beef online

Technology fits in with their operation when it comes to reproduction. They use a variety of techniques including flushing embryos into donor cows, in-vitro fertilization and sexed embryos to get the best results of breeding for their herd.

“Technology is awesome when it works,” Malone says with a laugh.

It has also played a bigger role in the pandemic years in communication and marketing. Previously the family’s fall cattle sale was in person. Now it is online.

“More than 70% of buyers haven’t seen the cows before they buy them today,” she said.

While many purchase online, some still like to visit the farm and see the cattle in person, she said.

Ag communications is a priority to Malone. While she uses technology in record-keeping to improve her business, the data also becomes helpful in telling the beef story to others, she said.

For the future she also sees consumers continuing to guide the industry.

“Welfare audits will increase,” she said.

Sustainability plays into her plans, both to address concerns of consumers and to improve the land for the future.

She and Ryan and their 18-month-old daughter, Ada, live off the farm, but Cori sees them building a new house on the farm so one day her daughter will run off the bus into the barn to get ready to show a calf at a fair.

Ada will likely have an evolving role on the farm as she grows up, just as Cori and Ryan take on new roles. They have taken over the night shift during calving season from her mom, who spent enough years doing that late-night duty, Malone said.

“We’re exploring cover crops and better ways of caring for the soil”, she said.

They do some rotational grazing, but it is difficult to set up an entire system on their farm with a creek running through. On this 90-degree day, the cattle stand near the gravel-bottomed creek grazing and resting in the shade.

“They always find the best place to be,” she says.

As a nutritionist, Ryan helps her pay particular attention to what the cattle eat.

“They are like Olympic athletes to us. We provide feed so they have a long, productive life,” she said.

“I want the public to know that input costs are climbing on the nutrition side,” she said.

They continue to look for healthy byproducts to keep costs down.

As for her vision five to 10 years from now, Malone said, “I see us using tech to stay relevant while remembering the core values my grandfather taught me.”

Cori Malone is following in her mother’s and grandfather’s footsteps as a seedstock producer. In the future, Malone said she expects even fewer people working in agriculture will have come from generational farms like her.

Cori Malone checks her iPad as she visits cattle on pasture in Tazewell County in central Illinois. Her operation is a mix of modern tech and lessons learned from generations past.