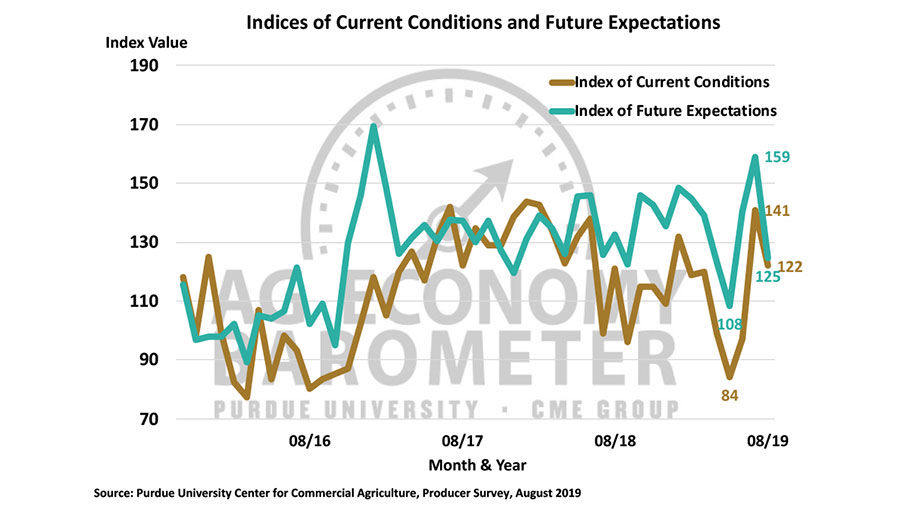 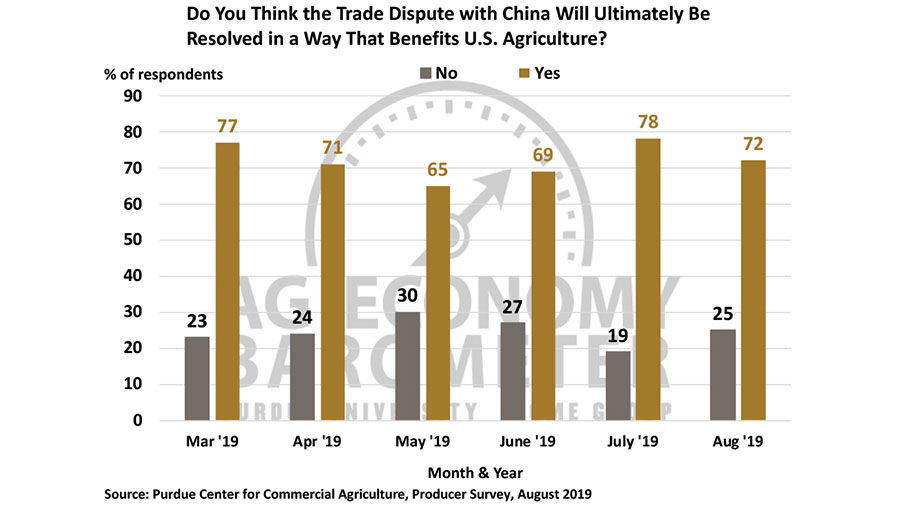 After rising sharply two months in a row, the Ag Economy Barometer weakened significantly in August, falling back to a reading of 124, down 29 points compared to a month earlier and just slightly below the June reading of 126.

This month’s nationwide survey of 400 U.S. agricultural producers for the Ag Economy Barometer was conducted from Aug. 12-20.

Weaker sentiment was fueled in part by both crop and livestock price declines that took place during late July and early August. In particular, prices for corn and soybeans fell sharply as crop conditions improved and the USDA released larger-than-expected crop production estimates on the August Crop Production report. Virtually all of this month’s survey responses were collected following USDA’s release of the Aug. 12 Crop Production report.

Producers’ concerns about the future of the farm economy led to a more negative outlook on both the advisability of making capital investments in their farming operation and on their short-run farmland value outlook.

Since March 2019, we’ve been monitoring farmers’ perspective regarding how quickly they expect the soybean trade dispute with China to be resolved. Back in March, farmers were almost evenly split on this issue with 55% indicating they felt it was unlikely and 45% saying it was likely the trade dispute would be resolved soon.

In subsequent months, the percentage of farmers saying they think it is unlikely the trade dispute will be resolved soon increased, ranging from a high of 80% in May to a low of 68% in June. In August, there was a modest sentiment shift as the percentage of producers expecting resolution soon rose to 29% from 22% a month earlier.

We’ve also been monitoring whether or not farmers think the trade dispute will ultimately be resolved in a way that benefits U.S. agriculture. In March, over three-fourths (77%) of farmers in our survey expected a beneficial outcome to the trade dispute, with that percentage declining in May before rebounding in July.

The USDA announced the per planted acre payment rates by county for the 2019 Market Facilitation Program (MFP) in late July. Payments are to be made in three tranches with the first payment to be made this summer and subsequent payments to be made in late fall 2019 and early 2020, if deemed necessary by the USDA.

To learn more about how farmers view the MFP payments, we posed two questions on the August survey. First, we asked to what degree does $16 billion in MFP payments to U.S. farmers relieve your concerns about the impact of tariffs on your 2019 farm income? Second, in a follow-up question, we asked whether or not respondents expect USDA to provide payments to U.S. farmers for the 2020 crop year?

Responses indicated that over two-thirds (71%) of farmers feel the 2019 MFP program will either completely or somewhat relieve their concerns about the impact of tariffs on 2019 farm income. However, nearly three out of ten respondents said “not at all” in response to this question, indicating t they felt the MFP payments fell short of making up for income losses attributable to the ongoing tariff battles.

Looking ahead to 2020, 58% of farmers in our August survey said they expect another MFP payment to be made to U.S. farmers for the 2020 crop year.

It’s a story that Salah Issa has seen once, which is one too many times.

Inheritance tax plan poised to be scaled back

A key Biden administration proposal to collect more tax revenue from wealthy individuals appears poised to be watered down by lawmakers, and m…

CHICAGO — On the west side of Chicago is a little oasis, a food forest in a formerly vacant lot with tomatoes by the handful and pears and app…

At 8:45 a.m. EST, a farmer was harvesting corn with his son in southern Illinois.

Rural mental health program expands to all of Illinois

DECATUR, Ill. — In recognition of a need for more mental health services for farmers and in rural communities, state officials announced a pil…

Like most consumer goods, food products are subject to price fluctuations. But some things are more variable than others.