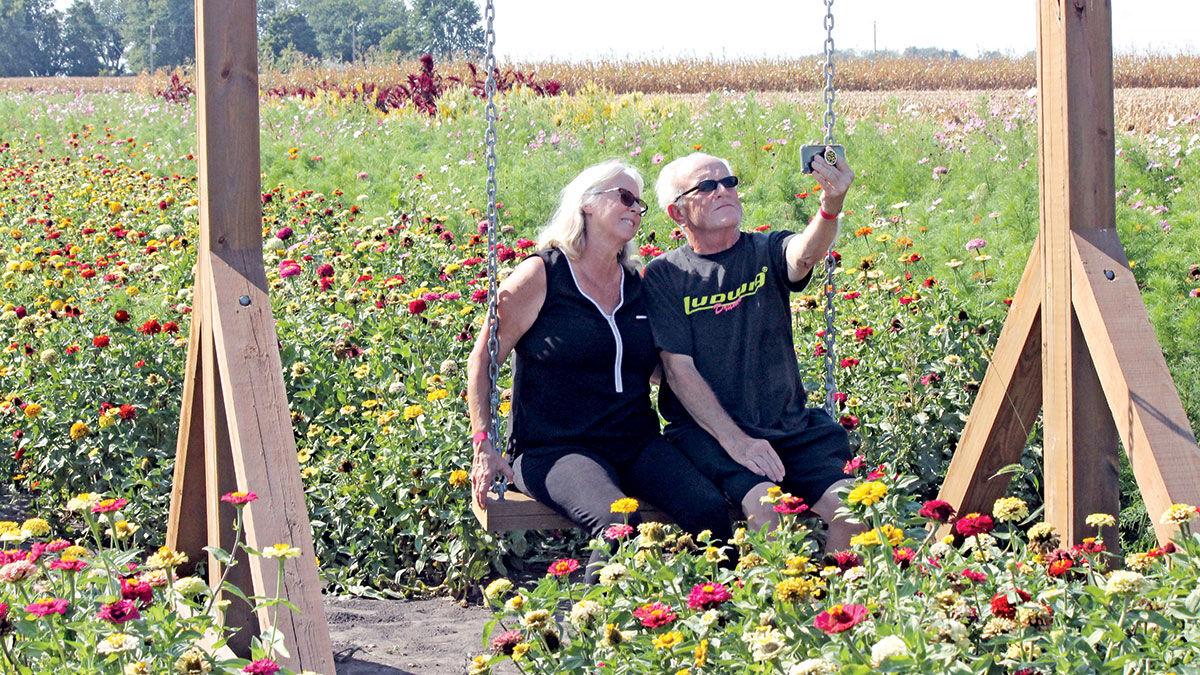 Terry and Tom Frederick of Plainfield, Ill., have fun taking photos of themselves and the flower fields at Heaps Giant Pumpkin Farm in Minooka, Ill. 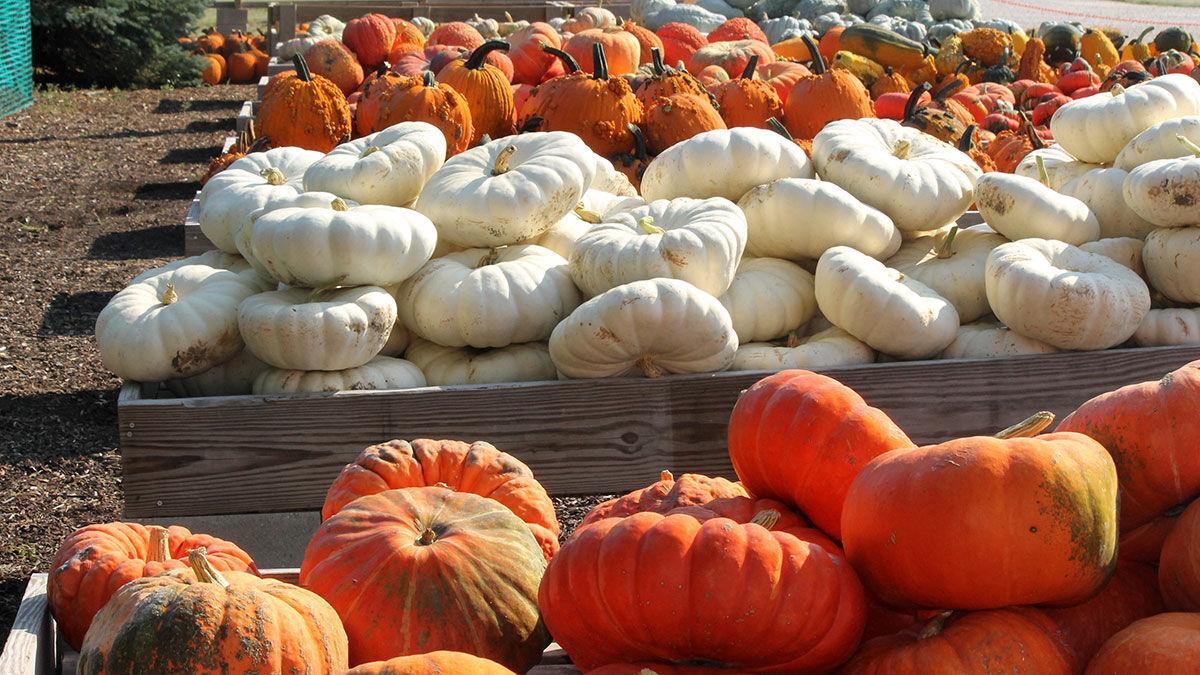 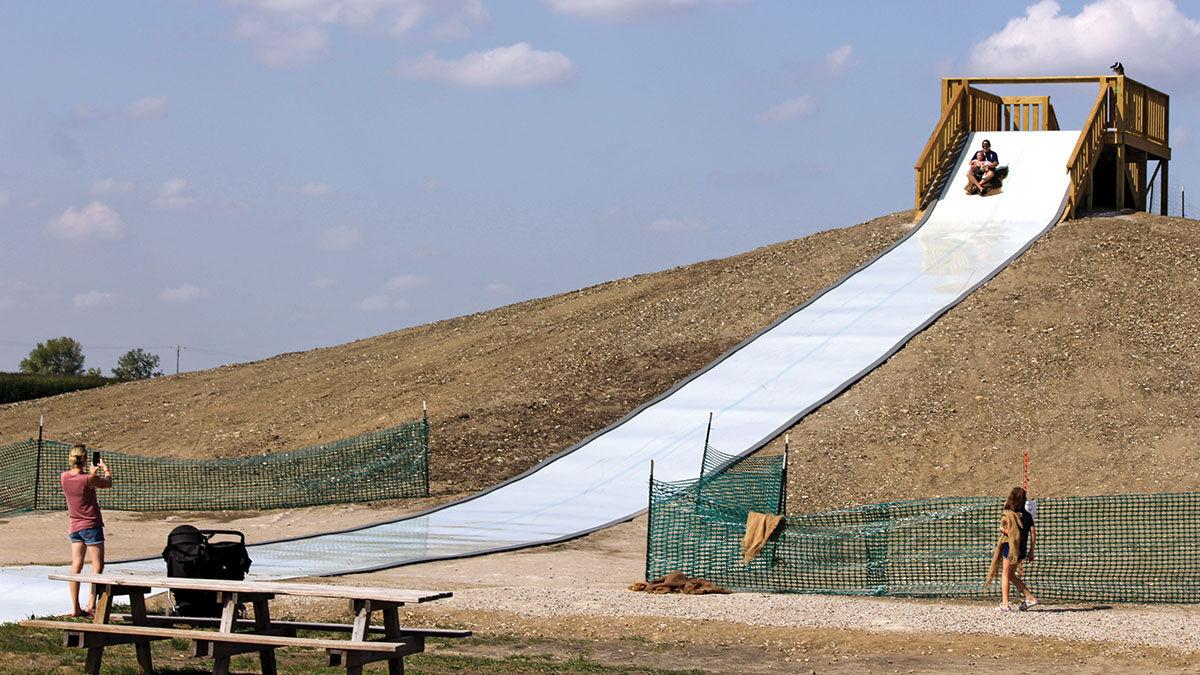 Families try out the new giant slide, which joined the activities at Heaps in northeastern Illinois this year. 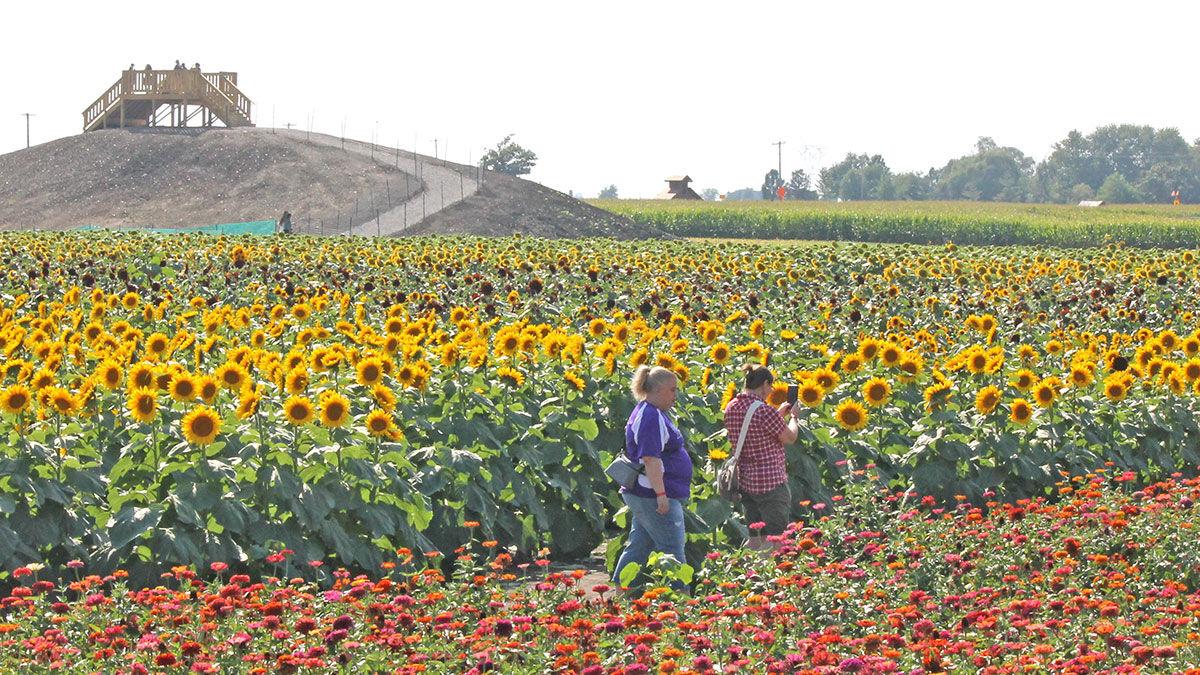 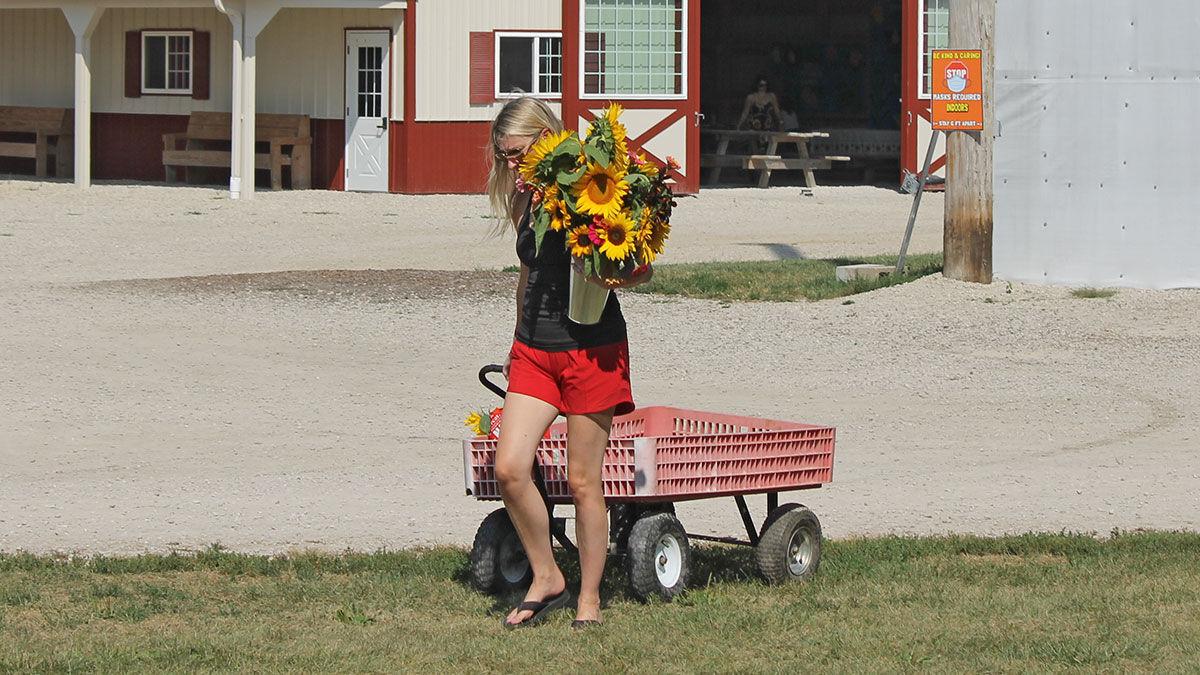 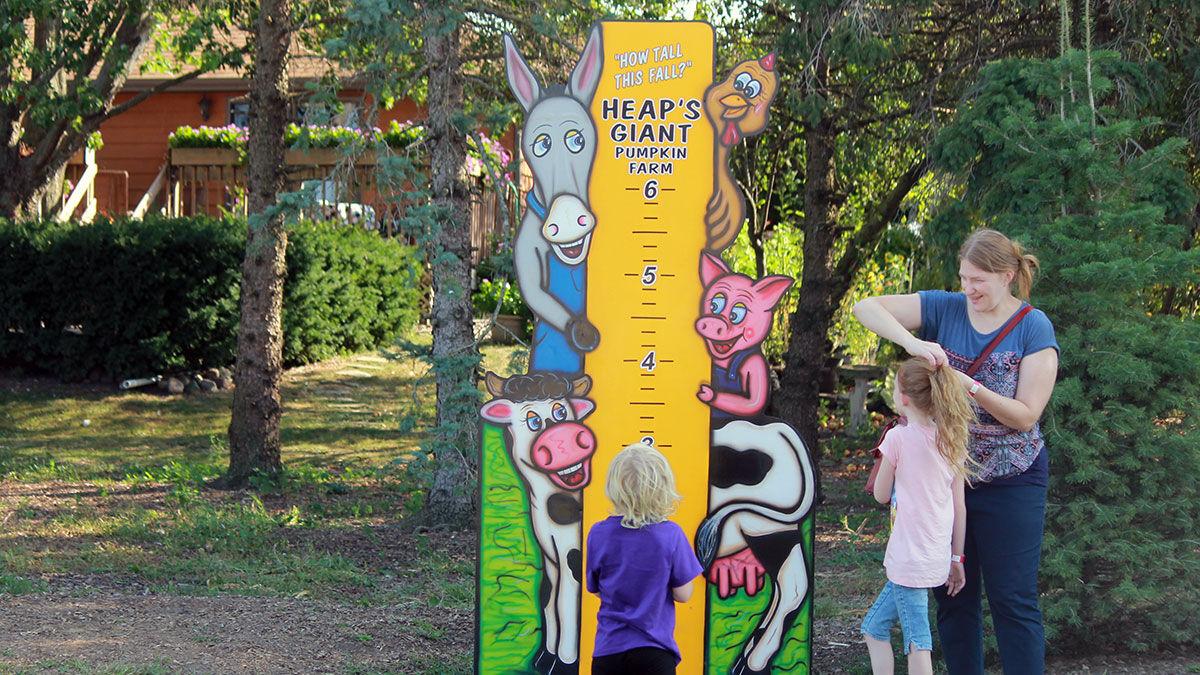 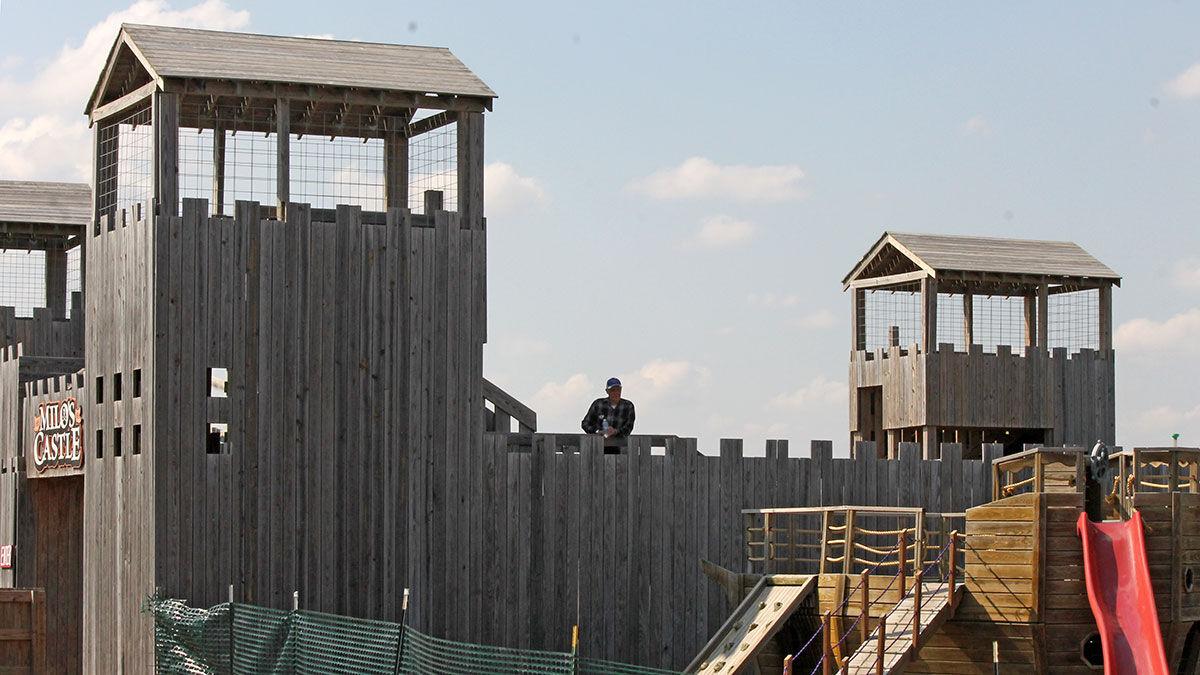 On one side of a 10-acre field of sunflowers and multi-colored zinnias is a field of corn stubble glistening in the sun after the crop’s recent harvest; on the other side are shades of green and gold ripening soybeans.

This time of year, the yellow sunflowers make way for orange, white and some non-traditional colors of pumpkins on 25 acres at Heaps Giant Pumpkin Farm. Giant mums in bright bloom are for sale near the farm’s sign.

This all started when Kevin Heap first grew pumpkins and sold them at a farm stand at the front of the Minooka property when he was a teenager.

He soon decided that agritourism, featuring pumpkins, was the way he could find his place on the farm, which has been in the family in Kendall County for 150 years.

Kevin’s family has always been “incredibly supportive of his dream,” said his wife Kaylee, who met Kevin in college.

“After one pumpkin season, I realized I needed to help or I’d never see him,” she said.

Kevin also grows corn and soybean crops with the family, and Kaylee works full-time, formerly with FS and now with Bushel, an ag technology company.

The couple have three boys.

The agritourism component adds to the farm’s diversity, something farmers are always looking for so they can bring home the next generation, Kaylee said.

While Kevin was in high school and college, he started to grow the business, eventually adding a corn maze, hay rides, buildings and a parking lot. He put his education at Joliet Junior College and his ag business and economics degree from Purdue University to good use.

Today, Milo’s Castle Playground, Heaps O’ Fun Barn Playground, hayrides and the u-pick pumpkin patch, mazes and the addition of a new giant slide this year all bring people to the farm, which officially started in 2005. It is located within an hour of Chicago and close to other main highways, which is an advantage for this type of business, Kaylee said.

They have three mazes. The corn maze, which includes checkpoints and trivia games, a more child-friendly soybean maze and a haunted corn maze.

The haunted maze was closed for safety during the first fall of the pandemic in 2020, but it’s back this October on Friday, Saturday and Sunday nights.

Like all tourism businesses, the Heaps’ pumpkin farm keeps adjusting to changing protocol during the pandemic by following the current Illinois and federal recommendations. They now have ticketing so people can reserve a spot, which helps manage the number of people on the farm at one time. However, the farm has plenty of space for families to keep as much distance as they would like from other guests.

The Heaps also created a walking path to the pumpkin patch during the pandemic for anyone who doesn’t feel comfortable sitting next to other families on the hayride, Kaylee said.

On a recent September day, kids squealed as they went down a giant slide. Others darted and giggled as they inched close to turkeys, petted farm animals or played in the Heaps O’Fun Playground. Grandmas chose the perfect pumpkins, others walked through the flower fields which closed for the season just before the u-pick pumpkin season started on Sept. 20.

“It’s so nice to be out in nature,” said Terry Frederick as she looked out over the flower fields from a raised platform attached to a shiny, red antique truck. Her husband, Tom, took a photo of her and then they took a selfie from a big, wooden swing in the flowery field.

“We’ve been to pumpkin farms before, but this is the first time we’ve been to a flower farm. And it’s so close to home,” said Terry, who lives about 15 miles away in Plainfield, Ill.

”The flowers seem to be a mood booster for everyone,” said Kaylee.

The pick-your-own flowers, featuring sunflowers, zinnias and bouquet fillers, started three years ago. It has been a good year for agritourism, with mostly good weather to bring people out to the business, which runs from August until after Halloween, she said.

While the Heaps grow most of what they sell, including giant mums, they also sell products from neighbors.

“We work with a couple of family friends near our farm who raise pork and beef on their farms to serve in our concession stand,” Haylee said.

When Matt and Kelly Moreland welcome people out to their farm in Cass County, they want it to be a place that celebrates the history of farmin…

Terry and Tom Frederick of Plainfield, Ill., have fun taking photos of themselves and the flower fields at Heaps Giant Pumpkin Farm in Minooka, Ill.

Families try out the new giant slide, which joined the activities at Heaps in northeastern Illinois this year.