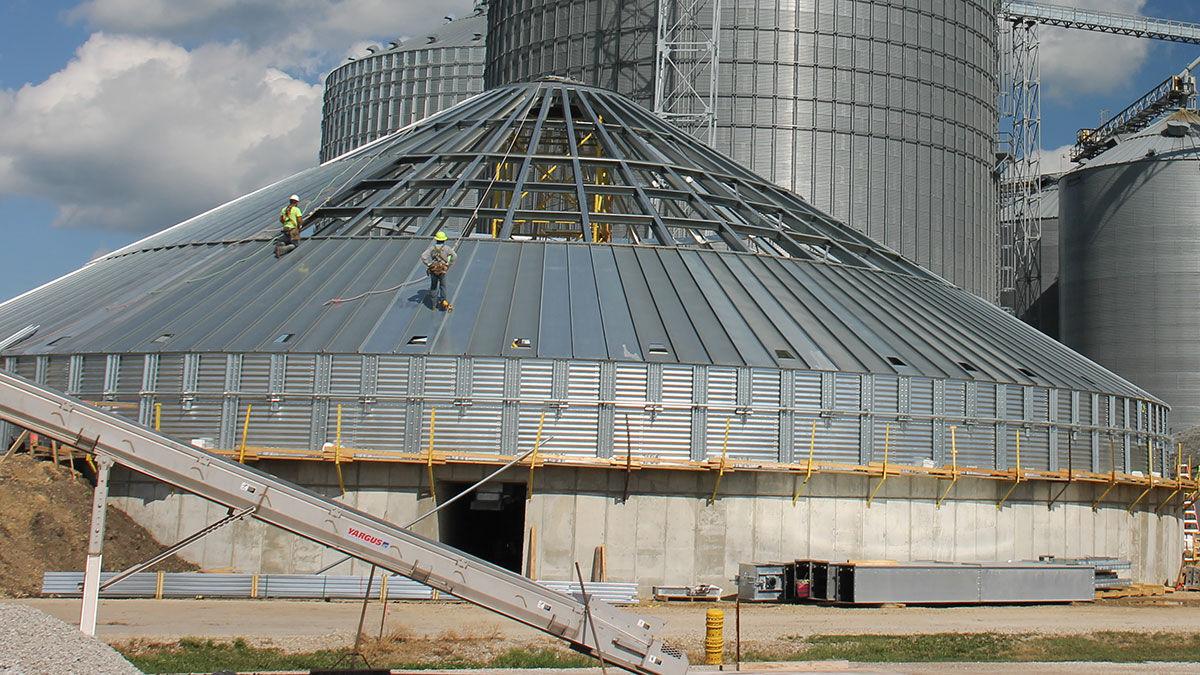 Workers construct a new grain bin at Stanford Grain Company in Stanford, Illinois, which is going to hold more than one million bushels of corn. The elevator is expecting a busy year during harvest. 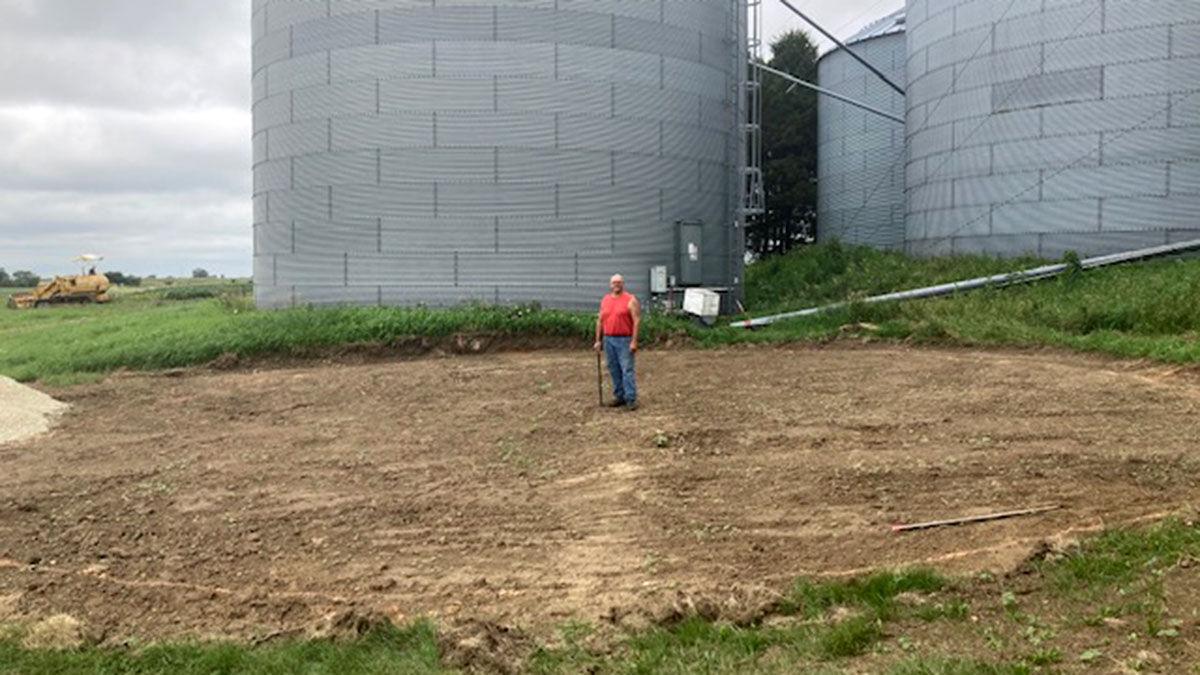 Jim Robbins, who farms in Will County, Illinois, plans to have a new grain bin ready for fall harvest. He is just waiting for the county zoning to go through. The 250,000 bushels of storage he has now have been a good investment and he needs more space.

Workers construct a new grain bin at Stanford Grain Company in Stanford, Illinois, which is going to hold more than one million bushels of corn. The elevator is expecting a busy year during harvest.

Jim Robbins, who farms in Will County, Illinois, plans to have a new grain bin ready for fall harvest. He is just waiting for the county zoning to go through. The 250,000 bushels of storage he has now have been a good investment and he needs more space.

STANFORD, Ill. – As harvest season nears, grain bins are popping up across the Midwest like seedlings on a hot summer day.

Stanford Grain Company is one place where a new grain bin that will hold more than 1 million bushels of corn is edging towards the sky, with construction to be done at the end of August.

“Everything lined up for timing,” said Brad Schuette, general manager. In a couple of prior years, the farmers’ co-op has to ship grain to make room for the fall crop.

The single elevator has the capacity of about 5 million bushels serving about 220 farmers. It appears that space will be necessary with a big crop coming this fall, with central Illinois farmers more optimistic than they were in early July when the weather was so hot and dry.

“Things have changed dramatically in the last month,” he said.

Brain Loeffler, one of the farmers who will deliver crop to the Stanford elevator, is happy to see the expansion. He takes grain to elevators in Stanford and Danvers, where he is a board member, and to the FS near his central Illinois farm.

“It’s a good sign for elevators and farmers to do long-term thinking and planning,” said Loeffler, of rural Stanford, a third generation farmer who was 2019 McLean County Chamber of Commerce farmer of the year for his agricultural practices and community participation.

The decision to expand bin storage at elevators isn’t just a decision for this year or three years, it’s part of a five-year plan and a look for the future, he said.

Staying on the farm

Northeastern Illinois farmer Jim Robbins is trying to get ready for more storage this fall on his own farm. But, he is waiting on zoning permission from Will County before construction can go forward for his new 48-foot 13-ring grain bin.

The gravel is down and he hopes construction can begin soon at his Peotone farm.

The 250,000 bushels of storage he now has on his farm now has provided a good return on investment, and with current conditions, the addition will do the same, he said.

“We have good markets near us,” he said.

The new bin will fit with Robbins’ marketing and financial plans. The storage will save him from paying for commercial storage, and he was able to secure a FSA interest free loan for seven years.

“Hopefully it will be done mid-September, he said.

There are always some farmers who wait until later in the season to decide to get a bin, but those numbers are higher than usual this year, said Karl Guetter, GSI director of farm sales.

“We’re having more last minute decisions this year. We’ve always had some, but this year there are more,” he said.

He sees three main reasons for this.

“It’s the potential size of the crop, lower consumption of ethanol and market disruptions of various kinds caused by COVID-19,” he said.

The demand for commercial bins was strongest in early summer. Those usually start earlier because of the time it takes for permitting and construction, he said of his experience in the Midwest and parts of Canada.

Safety options including winding stairs instead of ladders are also popular.

“Almost every bin we sell has a power sweep that minimizes bin entry,” Guetter said.

He also sees a trend to more full systems this year, in both major renovations and new builds. Farmers are choosing systems that include elevator receiving, drying and storage.

Farmers near Roanoke in central Illinois don’t need to worry about their new grain bin being ready at the Roanoke Farmers Association elevator. In mid-July, concrete was poured for the new 1.3 million bushel bin that is 135 ft. in diameter and expected to be completed by the end of August.

The farmer-owned co-op’s elevator system has capacity for 24 million bushels of grain at its four locations in Roanoke, Benson, Cooper, and Evans

The Roanoke system has had a steady construction program for the last several years when prices were low and people wanted to store grain.

“We went on a building spree,” said Rob Shaffer, board member of the Roanoke Farmers Association and a grain and beef farmer in central Illinois.

“When corn prices reached $2.98 this spring, nobody wanted to sell,” Shaffer said, so the board decided to build a new 1 million bushel bin for storage. Usually such decisions are made over the winter. But under the unique conditions of the pandemic, the decision was made in mid-May when it looked like there would be low prices and a bumper crop in Woodford, Tazewell and Logan counties, where the Roanoke elevators are located.

“We weren’t planning on building this year. It was a combination of the two driving factors of the river being closed and concerns with COVID-19 lessening demands,” Bline said.

The grain from Roanoke goes to the river and to ethanol plants. With part of the river system closed this summer for repairs of locks and dams and continued low demand at ethanol plants, the elevator needed extra storage.

An earlier expansion came during the period of steel tariffs with China. The co-op was able to get two bins instead of one, Shaffer said.

As the season progresses it seems a sound decision as there appears to be a demand for storage.

“People are pretty optimistic,” Bline said of the size of harvest now. He expects harvest to start mid to late September unless extreme heat and dry weather appears late in the season and pushes harvest early. Unfortunately prices remain disappointing, he said.