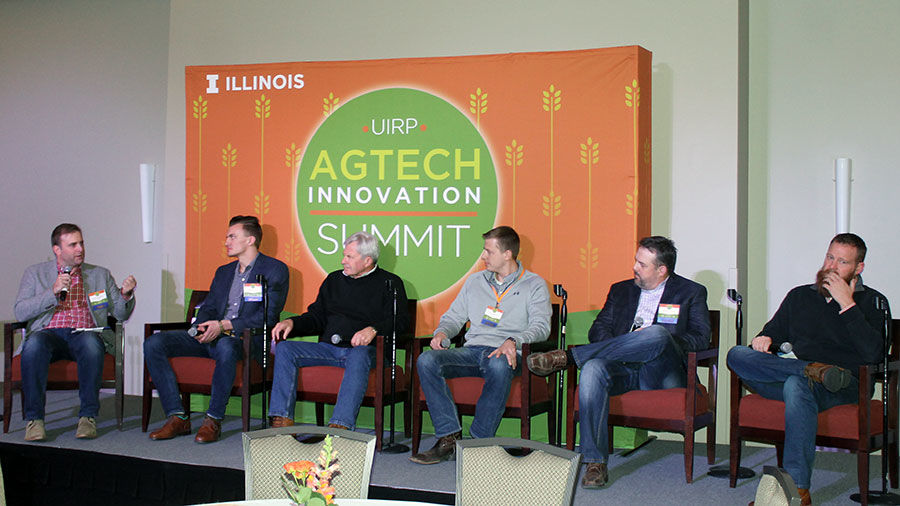 From left Chris Harbourt, Heath Huisinger, Ken Dalenberg, Josh Plunk, Matt Barnard and Jason Little all connect agriculture and technology in their work as farmers and innovators and shared some insight at the 2019 Ag Tech Innovation Summit March 7.

CHAMPAIGN, Ill. — When it’s too early and wet to start spring work, talking farming is the next best thing. Five Illinois farmers shared some ideas about their operations at the AgTech Innovation Summit at the University of Illinois Research Park on March 7.

Heath Huisinga, a fourth generation farmer, is the manager of Huisinga farms in Casey in southeastern Illinois.

Ken Dalenberg, owner of Scattered Acres Farms near Mansfield, is an early adopter of ag technology. He has been involved with beta testing and product improvement for many of the companies at the University of Illinois Research Park.

Josh Plunk is a third-generation central Illinois farmer with Plunk Brothers Inc. based in Mansfield in Piatt County. This county is one of the perennial top-producing soybean counties in the nation.

Matt Barnard, owner and CEO of Barnard Farms, worked in leadership roles in the seed industry before returning to the family farm to grow corn and soybeans.

Jason Little was a founder of Agrible, a technology company that helps farmers in decision making. He is now the digital partnership leader for Nutrien Ag Solutions.

Q: What are the biggest problems ag tech might solve for farmers?

“No. 1 is labor,” Huisinga said. He worries about getting to all his acres when conditions are right. He said it’s difficult to find good help even to drive a tractor — recounts when one young worker driving on the road looking at his phone drove into another tractor.

Dalenberg agrees that labor is a big issue. He spends a lot of time in his office connecting the precision ag details and data to make it work. He would like to spend less time at a desk.

Plunk sees his future in growing specialty crops, including seed beans and seed corn, and wants to use technology to make it most profitable. He wants to be able to work with tight margins with his premium crops successfully.

The panel was moderated by Chris Harbourt, a managing partner in Hatch Ag Group, which focuses on finding answers to technical challenges in ag. Harbourt said sometimes ag tech “solves some problems you didn’t even know you had.”

Q: What ag tech has made the biggest difference on your farm?

Barnard said the one piece of ag tech that brought the most benefit to his farm in the last 5 to 10 years is steering guidance.

“We all like straight things,” he said, and now he can watch a show on Netflix while he is working.

Center pivot irrigation is the ag tech that shines for Plunk. Seed corn companies like to have irrigation on their crops to reduce risk, he said.

Dalenberg said the game-changing tech for him is the “My Operation” app. It lets him see where his operators are in the field and helps him make decisions.

Huisinga agreed the operation app to is a big help as is guidance. He is young enough to have grown up with steering guidance, and the one time it was out, he realized what hard work and concentration it took before that assistance was an option.

Q: What is your attitude toward data ownership?

As data has become more abundant, farmers have different attitudes towards sharing it.

“I may be a naive guy, but I’m an open book. I’ll give you my data and trust you won’t do something bad with it,” said Huisinga.

Dalenberg sees the benefit of aggregated data — as long as it isn’t identifying.

“I like data within two counties of where I am,” Plunk said.

Information using Nebraska data doesn’t help him in making decisions as much as information that comes from the same soil types and similar practices in his part of the country.

Barnard has a differing opinion.

“This data is my IP (Intellectual Property),” he said. “That’s my secret sauce.”

Barnard said he also takes more of a protective posture towards data.

“We spend time with our ideas, if they don’t work, no one compensates us,” he said.