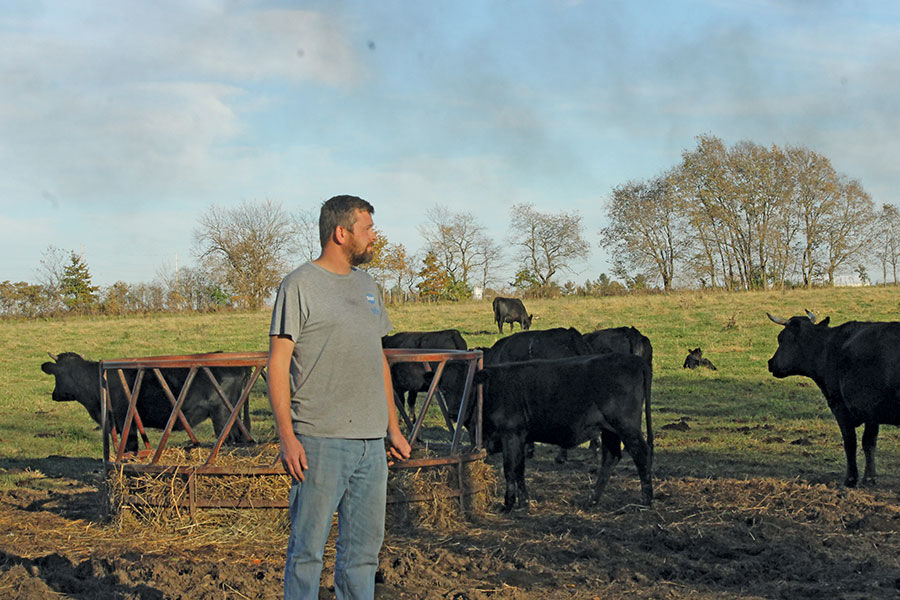 Clint Bland stands with a herd of Irish Dexter cattle at the farm of Jon and Emma Klingenberg in Butler, Ill. He said he is proud to be able to keep Jon’s herd together after his death in October. 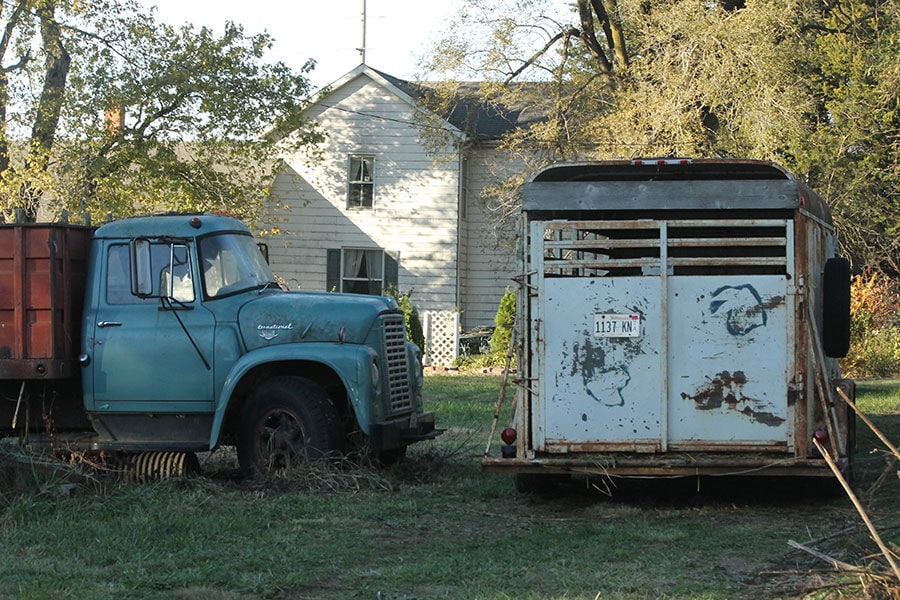 It will be a multi-week project to move the cattle with his small trailer. 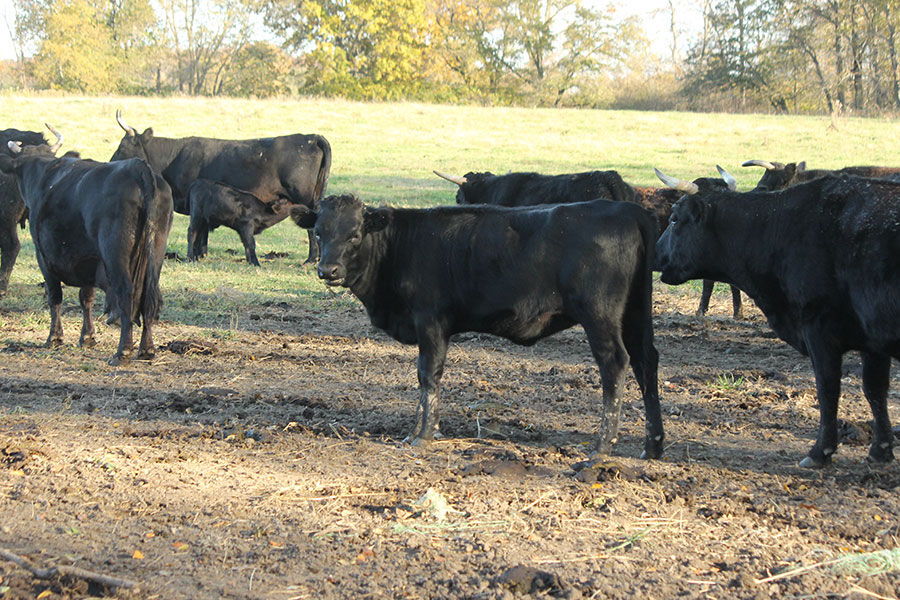 A herd of Irish Dexter cattle at the farm of Jon and Emma Klingenberg in Butler, Ill.

BUTLER, Ill. — When Jon Klingenberg died suddenly in October, part of the legacy he left behind was 42 grass-fed cattle and a reputation for selling good beef at his area farmer’s market.

But his family members aren’t farmers or ranchers, and amid the grief of losing a beloved family member, they didn’t know what to do with the Dexter cattle.

His wife, Emma, wasn’t able to manage the herd alone or continue to go to the farmers market by herself to sell the remaining beef, so the family had to quickly figure out how to handle the situation, said Molly Gleason, communication director of the Illinois Stewardship Alliance, where Klingenberg was a member.

“The grass-fed beef operation had always been Jon's thing, and no other member of the family knew even the first step on how to sell a herd, or really even what they needed to do to take care of the herd until they could sell it,” Gleason said.

Jon’s brother-in-law, Rick Hein of Rockford, said a neighbor sold them hay and others helped them figure out what to do to care for the cows.

Meanwhile, Gleason put the word out to other members of the alliance, made up of farmers and “eaters” who advocate for local and regenerative agricultural systems.

Jon Klingenberg was an Air Force veteran and an electrical engineer in Decatur and Tulsa, Illinois, for 30 years before he retired in 2000 and started running a 50-acre farmstead. He became a full-time organic farmer, raising grass-fed beef with his wife, Emma, who grew a unique variety of vegetables to sell at the Old Capitol Farmer’s Market.

“He would talk about organic farming and grass-fed beef to anyone that would lend him their ear,” a family letter to their friends at the farmer’s market said.

Chad Wallace of Jacksonville, who also sold at the farmers market, said the younger guys would offer to help with the heavy lifting involved in setting up Jon’s booth at the market, but Jon always said he would manage it himself and always did.

In the early days after Jon’s death, Wallace helped the family look into selling the meat online, but it wasn’t right for them. Instead, family and friends helped Emma get to the farmers market one last time to sell the meat and see customers and friends.

“Market folks are like family. Market day is the social part of the week. It’s a lifestyle,” Wallace said.

He’s sure Emma will miss it, and Jon and Emma’s market friends will definitely miss them, he said.

Shaun Tyson, a volunteer firefighter who raises commercial, grain-finished cattle, saw Gleason’s call for “mutual aid” — a term he was familiar with in firefighting.

He didn’t know Jon, but he knew he wanted to help and was one of the first on the scene.

He researched Dexter cattle, a utility cattle breed with an oxen-like appearance, popular with homesteaders.

Jon’s family initially received an offer of $75 a head, but Tyson said the herd was “significantly undervalued” at that price and helped them figure out a fair price.

Tyson helped the family sort the cattle, explaining that they had cow-calf pairs, dry cows, heifers and bulls which are managed and sold differently. He reminded them not to give the cattle grain to keep their grass-fed status.

“I didn’t want the family to be taken advantage of,” he said.

That had prompted him to drive more than 80 miles to the farm in western Illinois on his day off from his job at AgReliant Genetics, a seed research and production company, to see the cattle and talk things over.

Tyson said he wanted the family “to get a decent value for their cattle and honor their father’s memory and hard work.”

“Jon had put together a nice set of cows. He knew all about them, but there was no paper trail,” he said.

There was no transition plan for the farm. That’s something families with larger operations think about, but it’s important for small farms too, Tyson said.

The family eventually found the right buyer. Clint Bland is going to buy the whole herd.

After the herd is relocated to the Bland Family Farm in Morgan County, near Jacksonville, it will more than triple Bland’s current grass-fed herd of 14.

Bland, who got to know Jon and Emma at the farmer’s market where he also sold beef, heard about the situation and initially offered to buy eight to 10 cattle.

“I wasn’t prepared to take on 40-plus cows,” said Bland, who grows produce, eggs, and chickens sustainably.

The more he talked to the family, he decided to buy the whole herd, which will require extensive fencing and rearranging on this farm as quickly as possible. He and his father, John, worked on it all week before venturing out to get the first batch of cattle Nov. 8. He took a day off from his full-time job to start bringing the cows home.

“The cows were one more worry the family won’t have now. It will be a relief for them,” Bland said.

He knows it will be a multi-week project to move the cattle with his small trailer.

The first day was more problematic than he expected. There was no corral or easy loading area and building it was the first job. The cattle, many that hadn’t ever been in a trailer before, resisted.

Bland’s truck got stuck in the mud and a battery died. They were disappointed to only get five cattle loaded — about half what they had hoped for the first day.

But despite the challenges for Bland, his dad and helpers, five yearlings — three heifers and two steers — arrived safely at their new home on green pastures in Jacksonville later that day.

Bland knows he will have to buy more hay this winter and get to know the herd, but it’s all worth it.

“It’s nice to know Jon’s herd will stay together and continue the operation. I’m proud of that,” he said.

After visiting his father in the hospital Nov. 5, Alan Ainger felt hopeful. His father, David, seemed stronger, and there was a chance he coul…

Clint Bland stands with a herd of Irish Dexter cattle at the farm of Jon and Emma Klingenberg in Butler, Ill. He said he is proud to be able to keep Jon’s herd together after his death in October.

It will be a multi-week project to move the cattle with his small trailer.

A herd of Irish Dexter cattle at the farm of Jon and Emma Klingenberg in Butler, Ill.