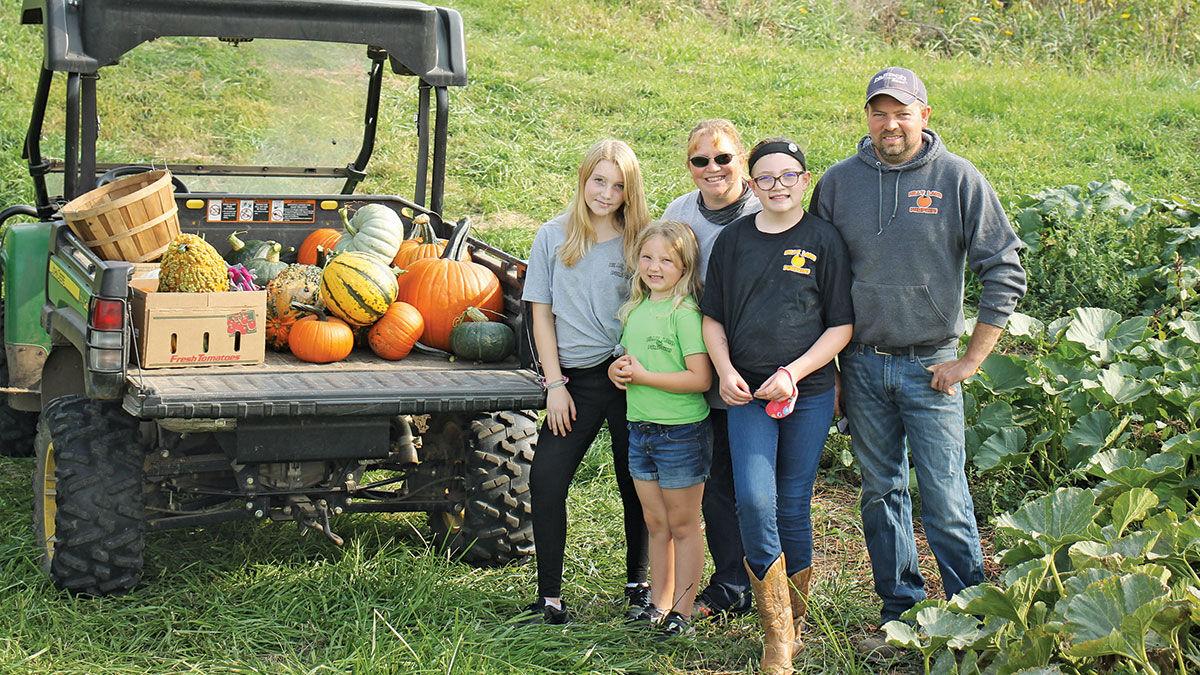 The Schaer family poses with the pumpkin display at Hilly Lane Pumpkins farm in Marshall County near Sparland, Ill. In front are Kiryn, Avery and Kaitlyn, with mom and dad, Carla and Adam in the back. 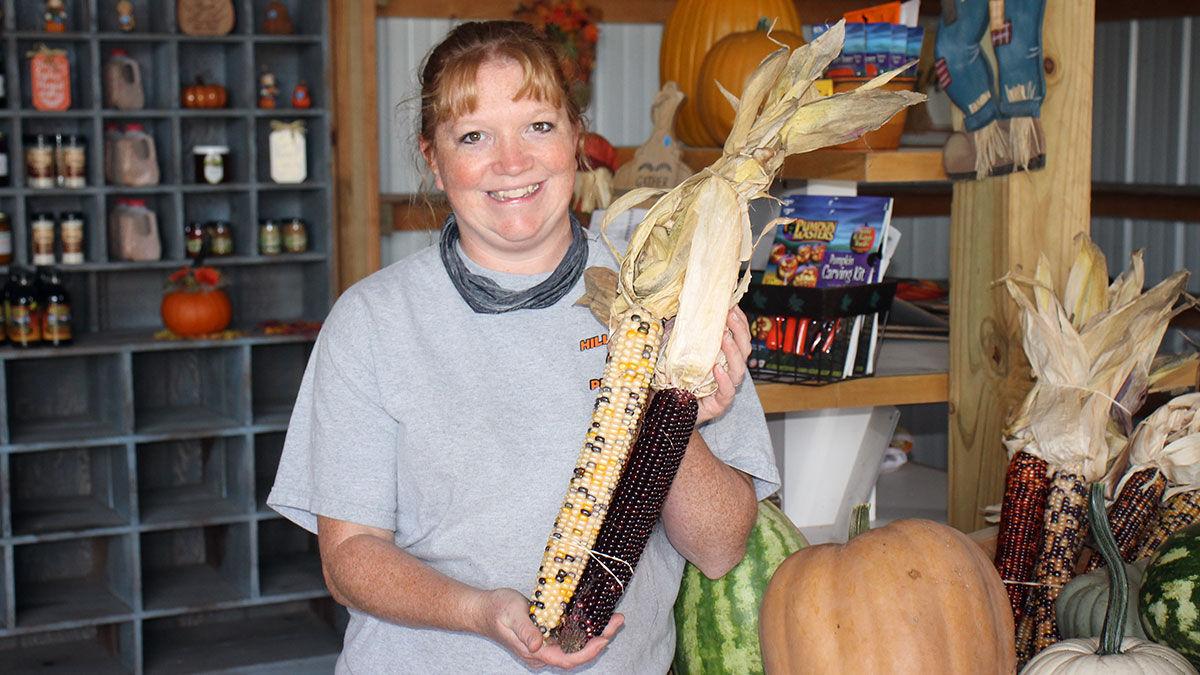 SPARLAND, Ill. — A wind storm flattened much of Carla Schaer’s Indian corn during pollination this year on the family’s Marshall County, Illinois, pumpkin farm. Her husband, Adam, told her there wasn’t much hope she would have the colorful corn to sell.

But much to his surprise, when he next checked the field, “Your corn is standing,” was his report to her.

In October, corn from that field is for sale at Hilly Lane Pumpkins near Sparland. And the family farm, like the corn, is bouncing back from the uncertainty the COVID-19 pandemic brought this spring.

Concern over whether there would be buyers for produce and pumpkins this year hung over Adam when he was deciding what and when to plant. He went ahead planting early crops, including onions and potatoes in the spring, and then followed with radishes and lettuce and other crops including pumpkins — similar to his usual system. It has paid off.

When farmers markets they attend in Chillicothe, Lacon and Peoria opened in June, “we were very nervous if people would come,” Carla said.

Response in Peoria went surprisingly well. People lined up to get produce.

“We sold out early,” she said.

While there definitely is extra work in preparing everything for market and working there with masks and gloves during the pandemic, Carla said it’s worth it.

She is a consumer studies teacher at Midland High School in Varna, Illinois, and Adam works for John Deere in Lacon in addition to operating their pumpkin farm and selling produce with his father, Lester, who grows about 42 acres of veggies. Adam grew up helping his dad with the produce business, so he knows both the joys and challenges.

Carla and Adam’s own pumpkin business started with selling a few pumpkins at a garage sale in 2005. Today they have five acres of pumpkins, squash and gourds and grow other produce.

This year that included winds, but there weren’t big challenges with disease. Adam is careful about his rotation of crops to prevent disease.

A big smile instantly comes to Adam’s face when he reaches among the green leaves and pulls out a large orange pumpkin or a white stackable pumpkin variety that has grown in popularity over the last few years. These are among about 25 varieties of pumpkins they grow here.

The couple’s three daughters, Kiryn, Kaitlyn and Avery, are active in the business as well, helping gather pumpkins and working in the store when they get off the yellow bus and run up the lane to their home.

The place is easy for rural visitors to spot with large hay bales decorated with pumpkin faces by the roadside.

“They love to pick their own pumpkins,” Adam said of the visitors to the farm.

There are ideal places to take family photos, but it isn’t a full-fledged agritourism site like some pumpkin farms.

When it came to pumpkin planting time in June, Adam chose to plant to his plan, hoping the worst of the pandemic would be over by the time the crop matured.

Despite the pandemic continuing, and many events this fall and winter already canceled, the Schaers have been able to invite people to the farm to pick pumpkins. The family practices social distancing and wears colorful masks. Every member of the family said they enjoyed meeting the people who come to farm and helping them find the perfect pumpkin.

Pumpkin season ends shortly after Halloween, although they do sell some pumpkins for cooking and some farmers pick up leftover pumpkins for feeding pigs and sheep, Adam said.

NORMAL, Ill. — Fall will look a little different this year, even for family favorite activit…