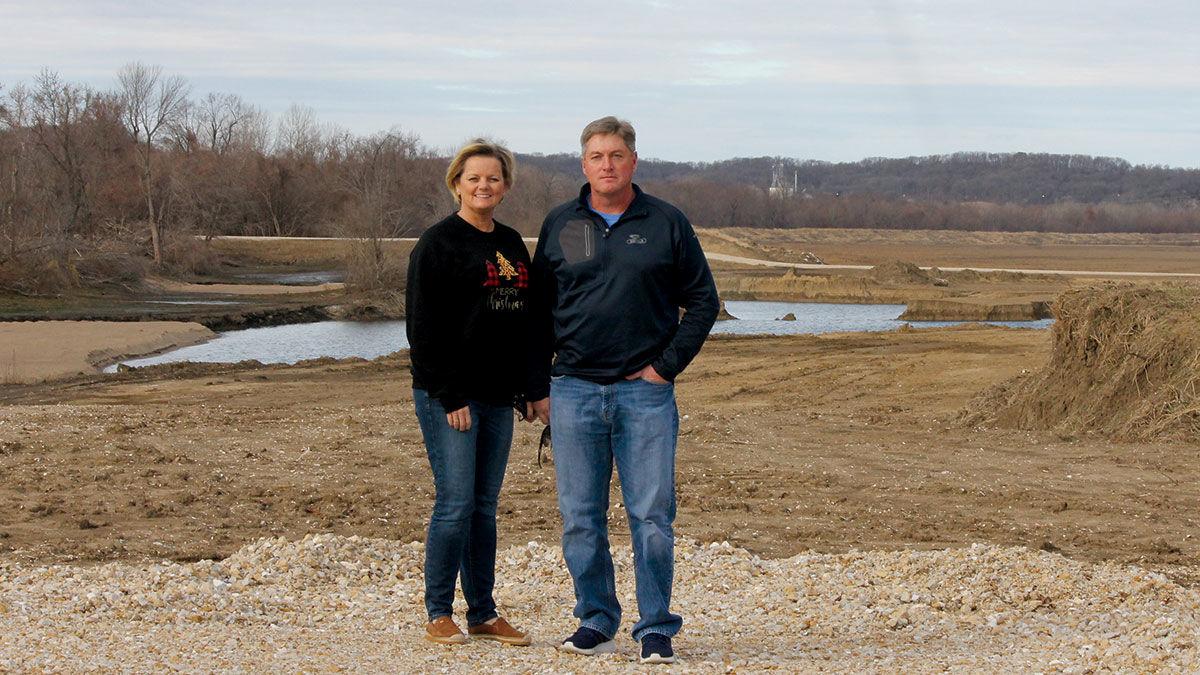 Jeff and Shannon Fraley stand near fields damaged when the Nutwood levee breached in June. 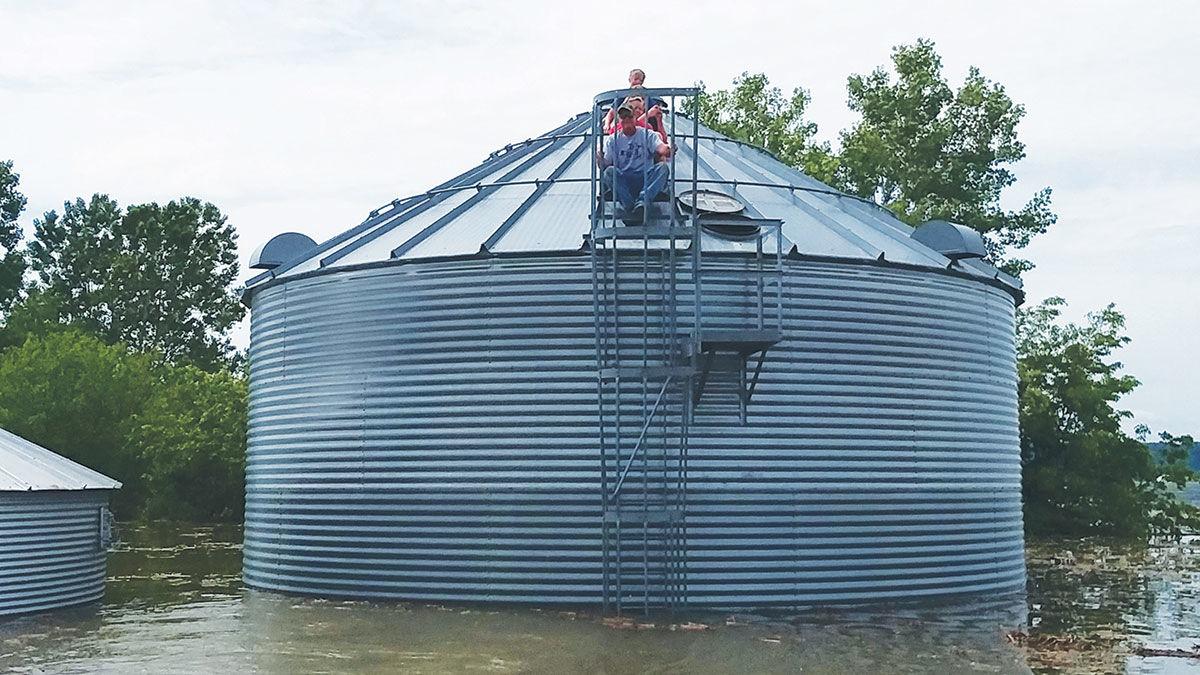 In June, the Fraley family, including Jeff and Jennifer, Jeff’s mother and their two teenage sons, clambered from a boat to the top of a grain bin surrounded by water to survey the damage. 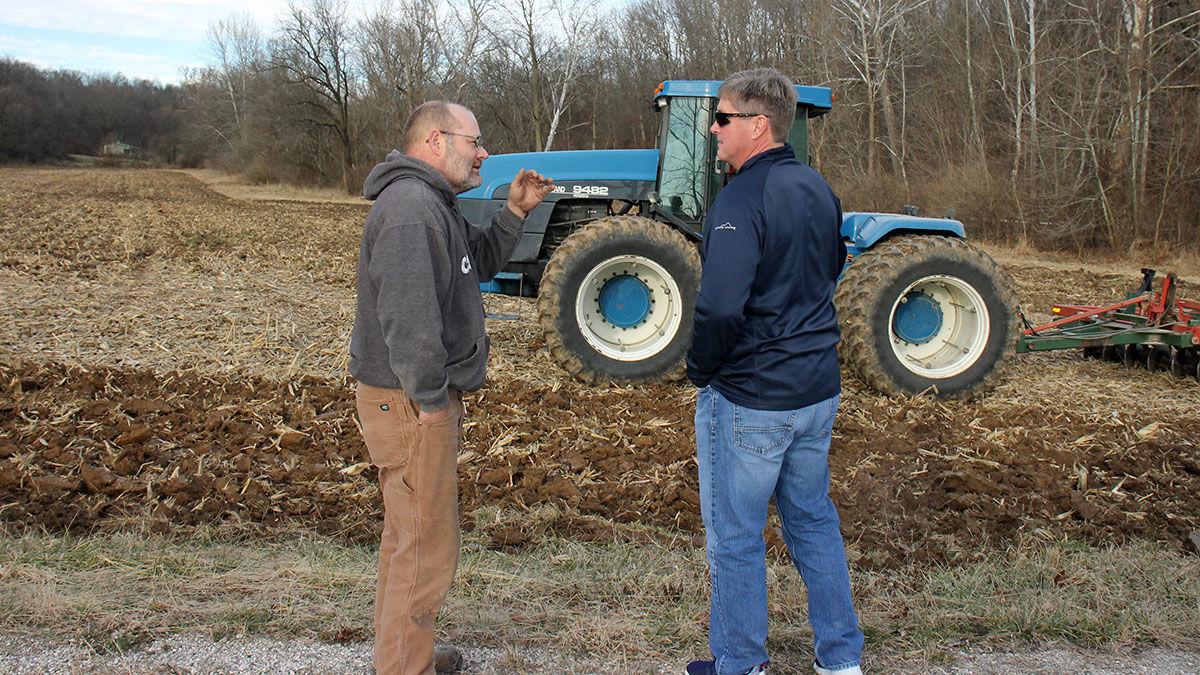 Jeff Goetten, a retired agriculture teacher has really seen the challenges of farming first hand this year in helping Jeff Fraley on his farms near Jerseyville, Ill. Goetten saw the devastation of the flood waters near Hardin and has also been part of the harvest and fall work which has been a most more positive note this fall.

JERSEYVILLE, Ill. — Jeff Fraley still feels low when he drives the road bordering farms where the Illinois River breached the Nutwood levee near Hardin in June.

He is greeted with toppled and leaning grain bins, a few destroyed buildings and land that lay underwater for months.

But a little distance away, after a turn to higher ground where he harvested a pretty decent corn crop this year, Fraley feels better again.

The water has mostly receded from farmland covered when the Nutwood levee breached on June 4, but the flooding this spring has left long-term effects for farmers and the community here.

In June, Fraley’s family, including his wife, mother and two teenage sons, clambered from a boat to the top of a grain bin surrounded by water to survey the damage. His wife, Shannon, joked then that the scene of the family might make a good Christmas card.

“You have to laugh or you cry,” she said.

The Christmas card photo was still up for debate. The bigger question that remains is what to do about the damaged and destroyed grain bins on their property. Fraley is weighing options and waiting for insurance payments to get the much-needed bins operational again.

After the 1993 flood, many farmers had trouble getting insurance payments for damaged bins. Some switched their insurance to what they thought was a more farmer-friendly company, Fraley said. They also scramble to empty the bins of grain anytime floods threaten.

This year, with the bins empty, there was no worry about claims for damaged grain as farmers in some other states experienced.

Fraley was relieved when he saw a neighbor’s wind claim successfully go through insurance and be paid. However, the insurance company then chose an “independent” engineer that determined it was waves, not wind, that toppled many bins, he said. On that basis, the insurance company turned down claims of at least five farmers he knows of, including his own, Fraley said.

He spoke to Illinois Farm Bureau president Richard Guebert Jr. and consulted others, but he hasn’t found a solution to his insurance woes yet.

Without his strategically placed bins, harvest takes about four days longer, Fraley said. Instead of the short trip to the bin, the trucks have to go to the elevators where there can be long lines, especially if wet corn causes delays. The lack of bins also complicates marketing plans.

Fraley will have to decide where to place the bins when he does replace them. The 1993 flood was supposed to be a 500-year flood — but 26 years later they are dealing with another major flood. Although he wants the convenience of nearby bins, he said he doesn’t want to go through this again. In 2015, they also emptied the bins twice when there was threat of a flood.

“We’re in limbo about what to do with the bins,” Fraley said.

Much to be done

When the fields flooded in early June, some of Fraley’s fields and grain bins were under 17 feet of water, so he left them and continued planting corn on acres that were not underwater. He estimates he lost about 430 acres of acres of land he farms for himself, his mother and landowners.

It’s been six months since the harrowing experience of the flood, but life and agriculture goes on.

This fall, it was surreal to be working the land that had been underwater for months. Fraley said he was shocked he could still see his planter markings on the ground.

Rick Zipprich, a fellow farmer in west central Illinois who worked with the Federal Emergency Management Agency in 1993, knew where to start in compiling information the agency would need.

Because much of his crop was lost in the flood this time, he worked on gathering information for other farmers while they were harvesting this fall. He has compiled a binder a couple inches thick that includes data, maps and many photos to request financial assistance to have ditches cleaned as part of the recovery plan for the area. The Fraleys helped provide photos and information he needed.

Zipprich estimates if the ditches are cleaned at the rate of 1,000 feet a day, it will cost about $52,000 to repair the ditches near the Nutwood levee breach.

Farmers have been working together to help each other and the community since the beginning of the flooding ordeal. They used their equipment and time to help in the effort to get Route 16/100 open near Hardin. In Hardin, residents were stranded, using boat transportation to get to jobs in St. Louis when the road was closed, Fraley explained.

The community wants to be prepared for the future.

He said it was tough to accept the delays in September while workers waited for a specific species of bat to migrate before work could continue on the levee repairs.

Some actions taken are difficult for him to understand at times, including why sand has to be trucked in from another state to fill the hole created by the water surge, when neighboring farms have sand on their topsoil they would like to see moved back, he said.

But through it all, farmers and the community stick together.

The Fraleys saw the best in people during the flooding. Everyone — from inmates at the Vandalia Correctional Institute to villagers in Hardin and teenagers including the Fraley’s two sons — tried to fight back the water by piling sandbags.

“We thought we were going to win,” Fraley said of those placing sandbags from daylight to dark during a two-week period.

When the Fraleys walk into a popular lunch eatery on a weekday, everyone knows their names. The town banker, other farmers and neighbors leave their food to greet them.

“We draw strength from the hardship,” Shannon said of the will in this small community.