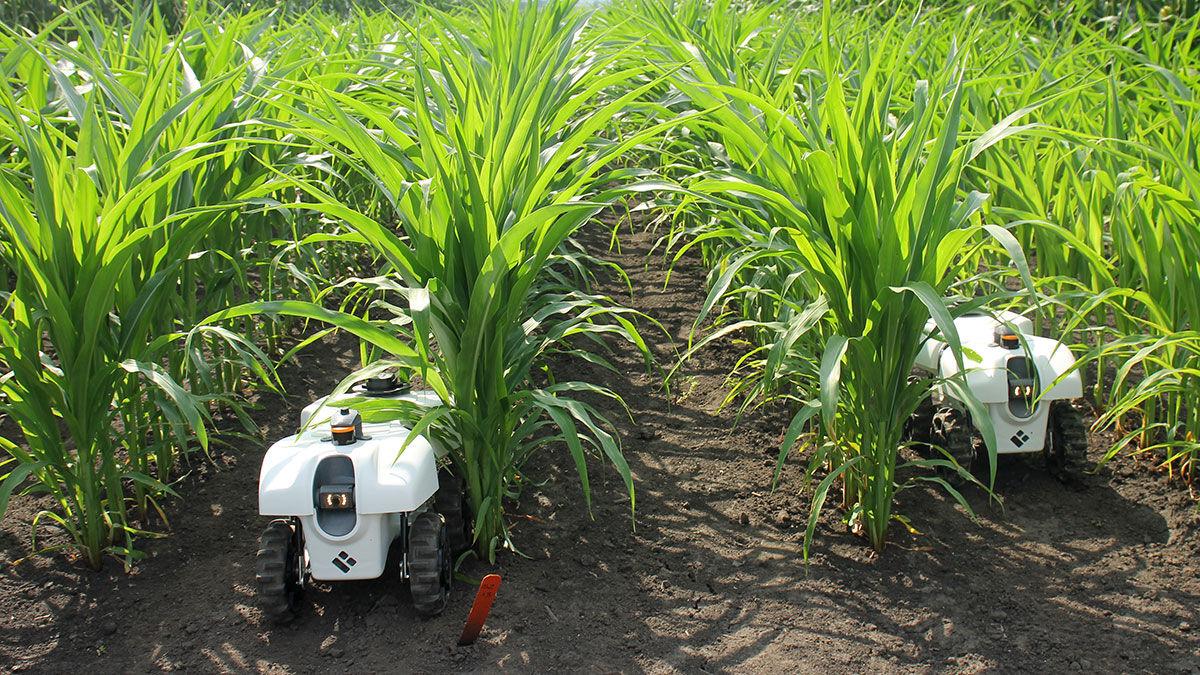 Robots not much bigger than a breadbox frequent the fields at the University of Illinois in Urbana where they are being perfected to run autonomously and to perform different tasks helpful to farmers and agricultural businesses. 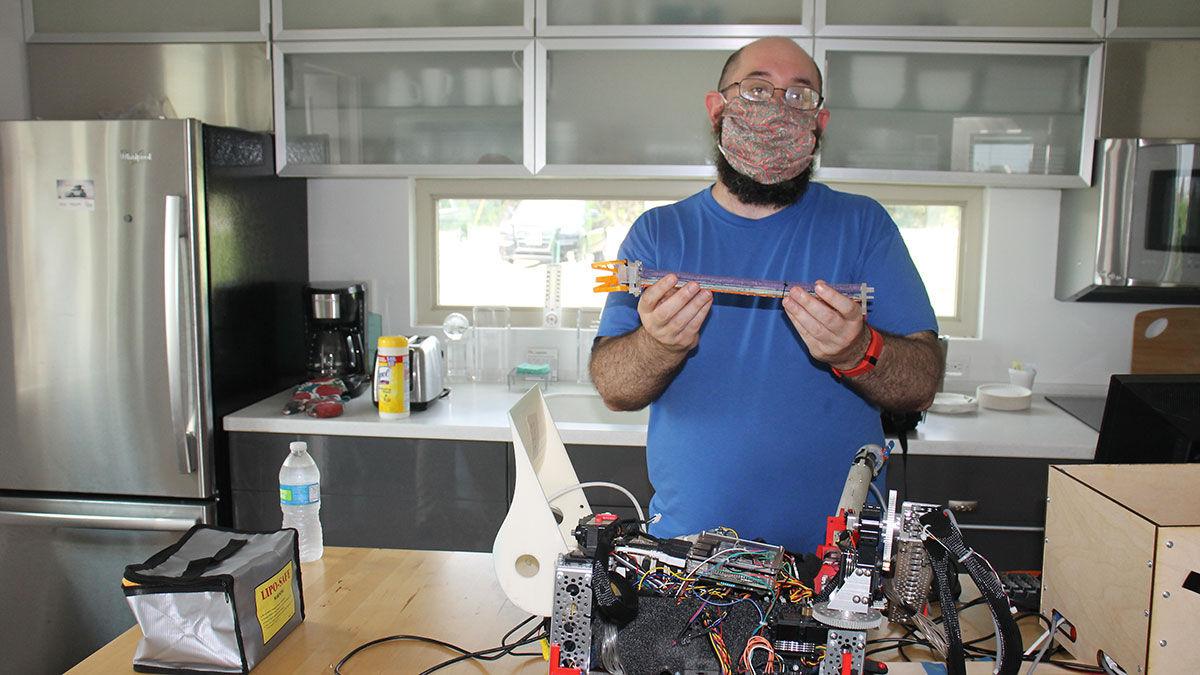 Ben Walt, a graduate student at the University of Illinois at Urbana-Champaign, is working on developing a robot that can pick cherry tomatoes and other fruit. 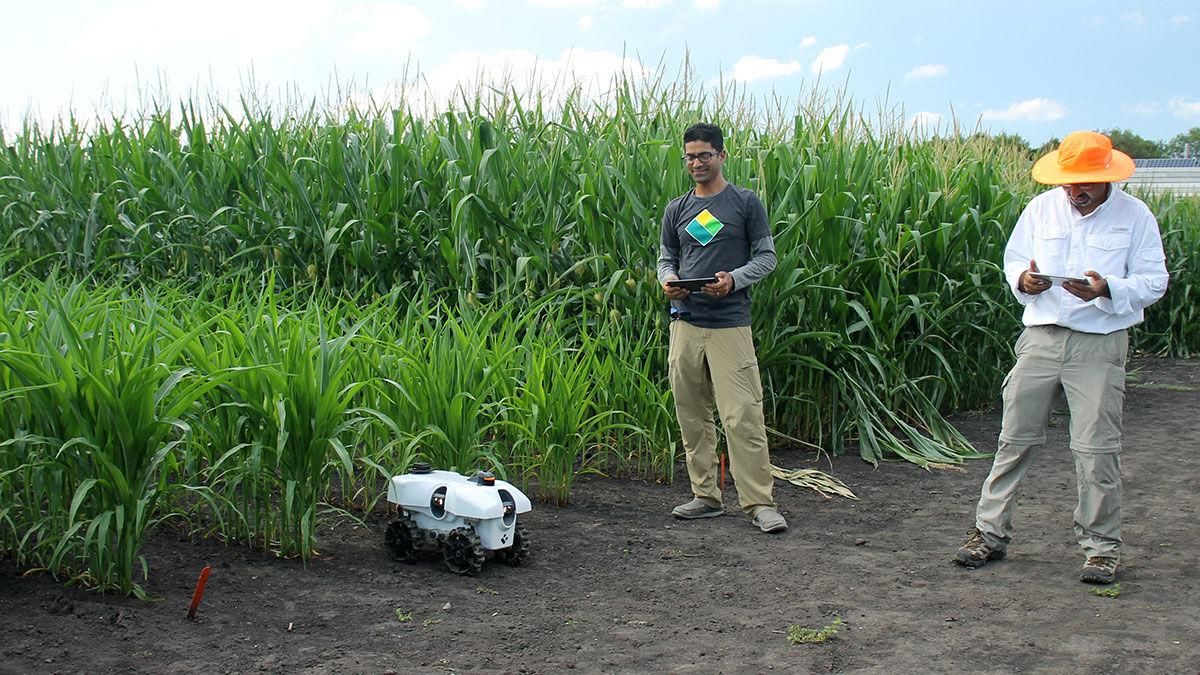 Girish Chowdhary and Chinmay Soman are co-founders of EarthSense in Urbana which produces ground drones to help solve issues in agriculture.

URBANA, Ill. — While robots in agriculture haven’t entirely lost their cool factor, they certainly aren’t the novelty they were even five to 10 years ago.

“They still have their appeal, but we wouldn’t care less if they didn’t solve a problem,” said Drew Schumacher, president of Rogo Ag, a company that deploys their autonomous robots to accurately take soil samples, allowing Midwest farmers to make better soil nutrient decisions.

You can’t get more enamored with the technology over the problem solving capabilities, said Schumacher, who helped create the SmartCore soil tester with fellow Purdue University College of Agriculture graduate Troy Fietcher.

Fietcher, who farms with his family in Indiana, identified the problem of inaccurate soil tests and had been working on a solution on the family farm.

Some new robot-based ag engineering projects may take years before they are used in farmers’ fields.

Others, including a weeding robot, are in development now at the University of Illinois with crop and engineering faculty, students and business partners working on it. They hope it will be in “real” farm fields by 2022.

Plant breeders are already using the TerraSentia robot, designed by University of Illinois professor Girish Chowdhary and his team in the Department of Agricultural and Biological Engineering at the university. They worked with EarthSense an Urbana ag robot company he co-founded in 2016 with Chinmay Soman, who brings both agronomic and engineering expertise to their inventions.

Plant breeders are using the cute, white robot, about the size of an average dog, to collect data on plant characteristics to help them create better hybrids.

It operates four motors, one in each wheel, and weighs about 30 pounds, which includes a battery, solar power, GPS, sensors and camera.

“It’s like a laptop on wheels,” Chowdhary said.“Its software is the glue.”

The idea is to keep their robots simple, low-cost and focused on problems that need solving, like herbicide resistance in weeds. Large equipment companies have been working on sprayers and planters for 40 years and have those perfected, Chowdhary said of their niche.

EarthSense will build about 100 TerrSentia robots this year and continue to scale up, Chowdhary said

The TerraSentia-style robot and other work of Chowdhary is also inspiring Adam Davis, a weed scientist and department head at the College of Agricultural, Consumer and Environmental Science at the University of Illinois.

As soon as Davis saw Chowdhary demonstrate an autonomous drone a few years ago, he could see opportunities for working together.

“I could see the development potential in weed control,” Davis said.

Chowdhary’s robot, also known as a ground drone, may include spinning blades for bigger weeds and light soil disturbance early in the season. Chowdhary envisions a team of 10 autonomous robots weeding a field in five or six hours.

Labor is sometimes difficult to find for chopping crews to tackle Palmer amaranth in southern Illinois and giant ragweed in northern Illinois. A group of robots weeding a field would be another tool to fit into an integrated approach to managing weeds, especially herbicide resistant ones, Davis said.

There is also interest among organic farmers.

When the coronavirus pandemic struck, it created a sense of urgency for this application, Chowdhary said. It reminded people how quickly a crisis can arise from a potential problem. It is clear how herbicide resistant weeds can quickly take root and undermine growing crops, and this issue must be addressed before it gets worse, he said.

Field days for farmers to see the sturdy, smart weeding robot at work are planned for next year, Davis said. Hopefully in 2021-22 the robots will be in real fields on farms, Chowdhary said.

“We are now looking for farmers who want to do pilot projects,” said Chowdhary, encouraging anyone interested to contact EarthSense.

The core of the problem Schumacher and Fietcher tackled was rooted in challenges found on the Fietcher family farm in Lafyette, Ind. Fietcher’s research showed that he was getting a 10-30% error on traditional soil tests.

When fertilizer is the third biggest expense of growing a crop, such an error could wipe out profit, Schumacher said. They discovered the issue was in the collection process. So they developed SmartCore, an autonomous robot which went on the market in 2018, soil testing 20,000 acres that fall.

This robot became better known across the Midwest when it did well in a Beck’s Practical Farm Research study last year. This year, the company already has plans to soil test on more than 300,000 acres.

The autonomous robot, mounted on a skid steer, collects samples on a 2.5-acre grid and returns them to the edge of the field to be sent to a lab. The engineers continue to fine-tune the robot and are working on a new version that rides on a Kubota UTV, which has better suspension.

This summer, staff at the university’s biological engineering labs are also working on both soft and rigid arms for robots to pick fruit and manage specialty crops.

A small, well-watered garden is growing cherry tomatoes where the robot will be tested. It will probably take at least three years before the specialty crop robot will be available to farmers, Chowdhary said.

Chowdhary, who didn’t start with an agricultural background but brings his expertise of artificial intelligence and aerospace engineering to agriculture, said he was drawn to agriculture where he could see tech make a difference. His work led him from working with drones to large robots, and now ground drones not much bigger than a breadbox.

He and Soman design robots specifically for agricultural use, rather than adapting robots used in factories or other industries. They aren’t waiting for autonomous cars, for example, to be adopted on a large scale. There are advantages to working in agricultural conditions, Chowdhary said.

NORMAL, Ill. — Both first-time and veteran FFA members got a new experience in attending the 93rd annual Illinois FFA Convention.

NORTH HENDERSON, Ill. — Almost 80 years ago Bill Meeker’s father and grandfather bought an Oliver 70 tractor. It was the first Oliver in the family.

Data from the Illinois Farm Business Farm Management (FBFM) Association provides insights into leasing arrangements in Illinois on farms that receive the majority of their farming income from grain operations and farm at least 500 acres.

As a 22-year Army veteran who spent time in more than one hot spot, Amy Hess isn’t a chicken. But she is proud to be called a chicken farmer.

Water quality, B10 among winners in Illinois’ new budget

Connecting companies and customers can be a challenge, especially when it comes to smaller businesses. A program in Illinois hopes to add anot…

A strong bond between farmers and veterans continues to grow through challenges including the COVID-19 pandemic.

The availability of farm labor is a major concern for many, and there are few signs the situation will improve in the near term.

Illinois FFA members will soon get a chance to see many of their friends in person for the 2021 convention.

Robots not much bigger than a breadbox frequent the fields at the University of Illinois in Urbana where they are being perfected to run autonomously and to perform different tasks helpful to farmers and agricultural businesses.

Ben Walt, a graduate student at the University of Illinois at Urbana-Champaign, is working on developing a robot that can pick cherry tomatoes and other fruit.

Girish Chowdhary and Chinmay Soman are co-founders of EarthSense in Urbana which produces ground drones to help solve issues in agriculture.