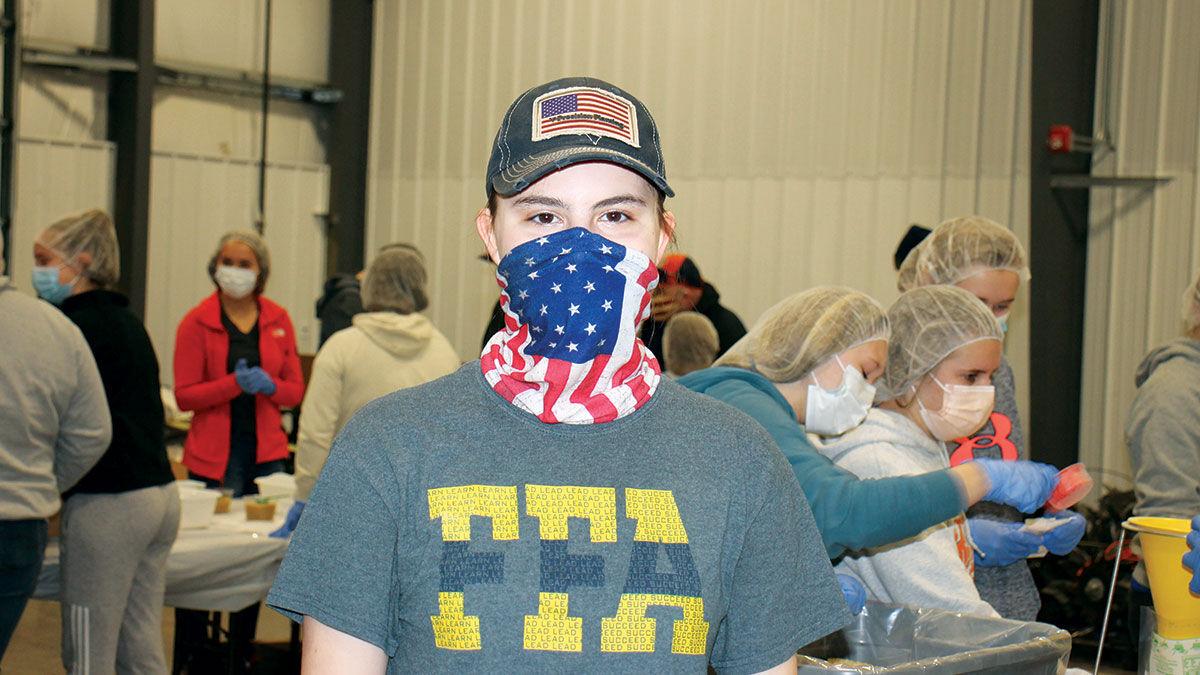 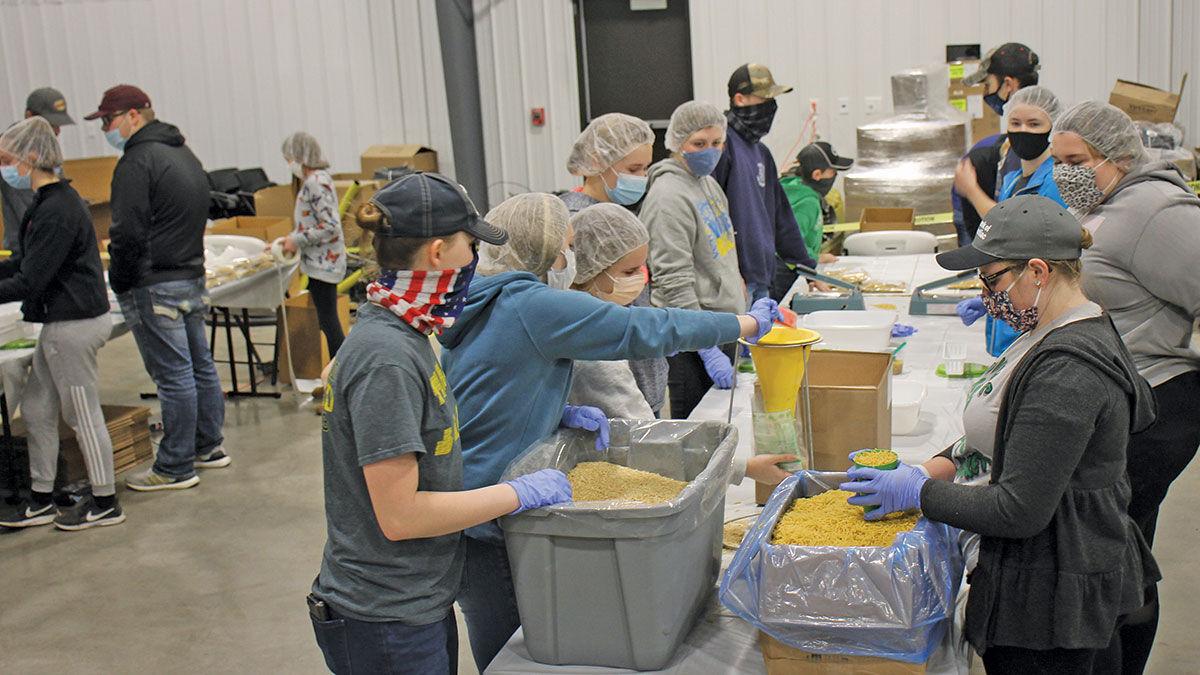 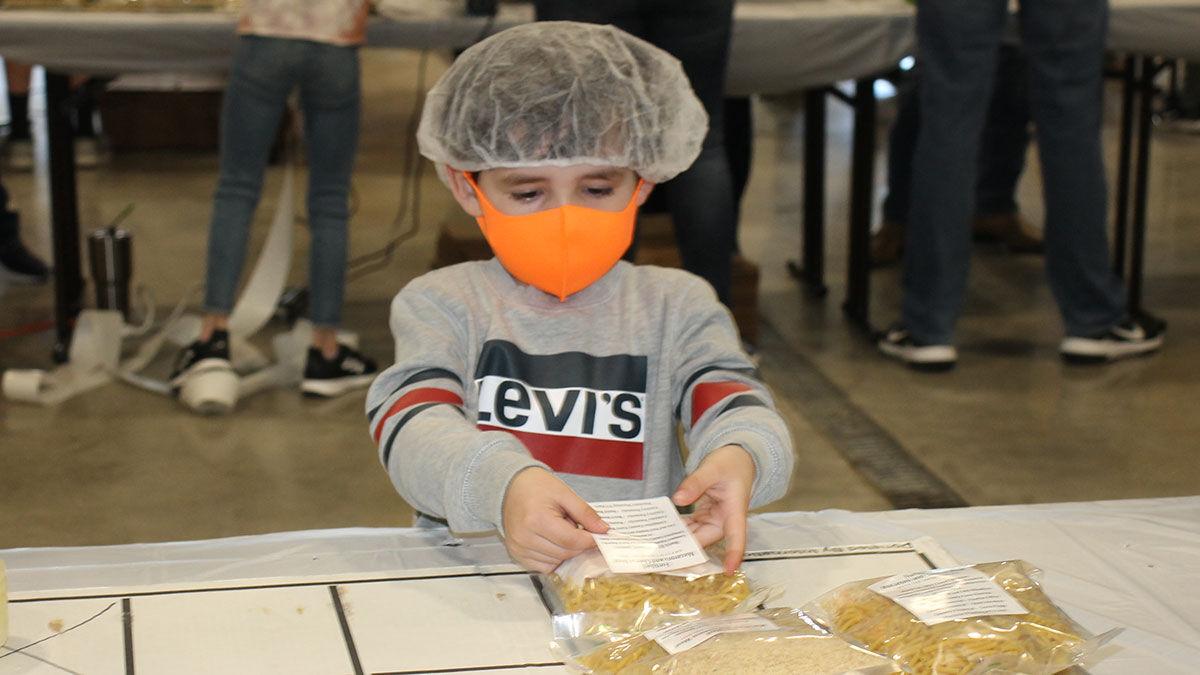 PONTIAC, Ill. — Less than half an hour into a food packaging event she organized, Libby Larkin jumped up on a cooler high enough to see all her volunteers to congratulate them for already reaching 5,000 meals.

They knew they still had a long way to go to meet her goal of packaging 50,000 meals for local schools, daycares and food pantries, but volunteers cheered her on because they knew this 15-year-old powerhouse leader was going to make her goal.

Wearing a patriotic mask, blue rubber gloves, an FFA t-shirt and jeans, Libby went from table to table, making sure all the volunteers had what they needed.

She solved any problems as the volunteers put together almost 24,000 macaroni and cheese meals in the morning alone.

“Sometimes one meal is all they will get in a day,” Libby said.

In all, about 150 volunteers packaged more than 50,400 meals on March 20 for people in this community in east central Illinois.

Leon Sporrer, event coordinator for Meals of Hope, the organization Libby worked with, has worked in 35 states for the group, which takes a hands-on approach to fighting hunger. It partners with volunteers who package the meals designed for extra nutritional value.

Sporrer has coordinated dozens of events like this, “but never one organized by a 15-year-old,” he said. “She’s beyond my favorite.”

Libby even wrote the grant, and it was approved on her first try, he said of the funding that made the event possible.

He was impressed with what a girl not even old enough to have her driver’s license could accomplish.

Together, the $10,000 Compeer Finances’ Fund for Rural America grant she received plus $2,500 she raised from local businesses and community members, funded the more than 50,000 meals.

The Pontiac Township High School sophomore, who is active in FFA, Key Club and 4-H, first developed an understanding of food needs when she was in grade school and helped with a 4-H project. After helping with a food pantry packing event in Bloomington, she was determined to do more.

“I always know where my next meal is coming from, but, unfortunately, not all kids do. Hunger is closer to home than many people realize,” she wrote in an appeal for volunteers. “Until I became involved with food packaging events, I didn’t know how many kids in my own community face hunger and food insecurity and do not have nutritious meals on a daily basis.”

Last year, hunger became a bigger problem for children who had been receiving free and reduced cost lunches at school, when schools switched to remote learning at least part of the time during pandemic restrictions, Libby said.

The meals put together at her event will go to schools, Boys & Girls Clubs and church food pantries in Livingston County.

“I want to help kids in my own community,” she said at the event.

It was clear that a number of her friends felt the same way, as dozens of teenagers helped with the work. The youth factor was evident with FFA, Key Club, 4-H members and friends from student council and sports teams all measuring and packaging together. They were joined by community members —from preschoolers to seniors.

It was certainly a family affair too, with her parents, grandmother and brother all playing a role. Libby’s brother works for Precision Planting in Pontiac, where the event was held. But she secured the venue — the large new Precision Technology Institute building just off Interstate 55 — by talking with Jason Webster, the lead agronomist at the institute.

The ag company donated the space for the effort, she said. It seemed the perfect place to assemble food, in a building that is all about agriculture.

“It’s pretty amazing to see how much she gets involved,” said her father, Dale Larkin, a parts manager at Stoller. He also farms about 600 acres of corn and soybeans.

Her mom Jenny, business manager at Institute for Human Resources, and her grandma Penny Lauritzen, recently named to Hall of Fame for the Illinois Society of Professional Farm Managers and Rural Appraisers and known for her support of youth and rural issues, were packers but also helped get the word out about Libby’s project.

Like her family, Libby sees herself in a future career related to agriculture in a role that helps people.

She, in turn, inspires those younger than she is. Emmett Richardson, at age four one of the youngest volunteers, became an expert label sticker by the end of the morning. He worked side by side with his mom, Kayla Harder, and his dad, Jared Richardson.

“Libby is our next door neighbor. She’s a helper so we do what we can to help her,” Harder said.