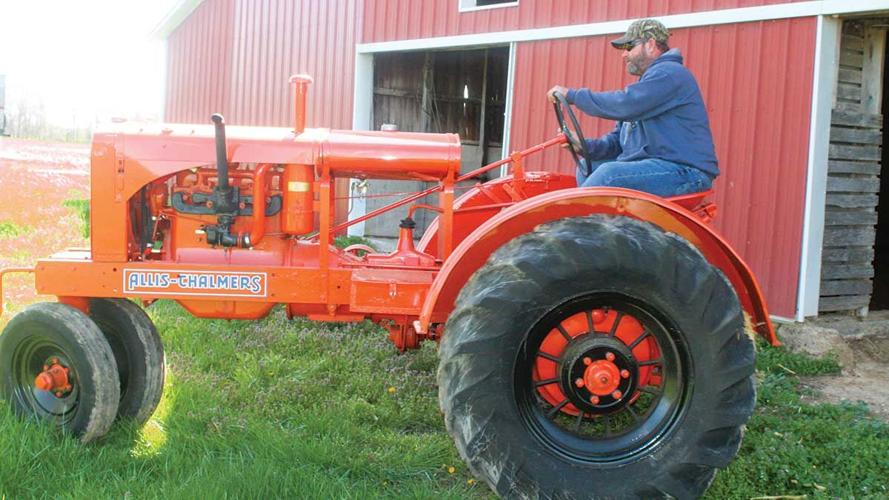 Mark Medford climbs onto an antique tractor that was first purchased by his grandfather. The long shifter on his left once jumped into gear while the machine was in neutral, and the tractor ran over him. 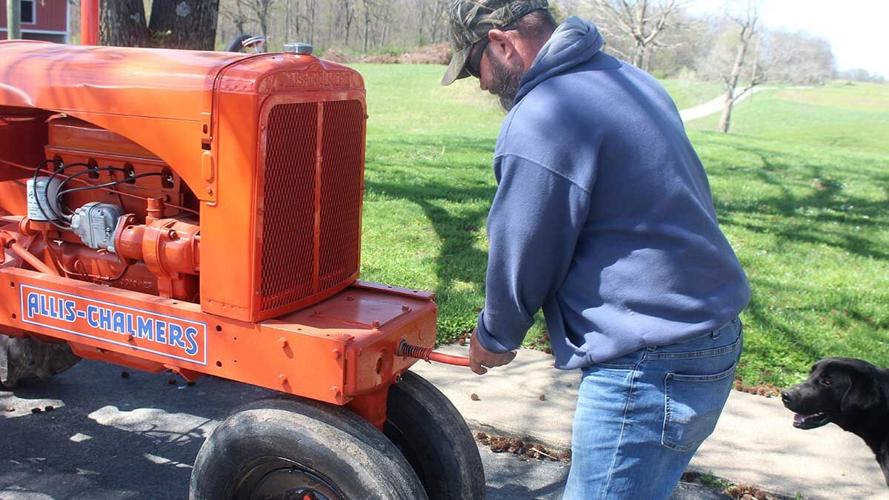 Mark Medford uses a hand crank to start the engine on his 1937 Allis-Chalmers tractor.

BENTON, Ill. — Tractors today are much safer than those built decades ago. Mark Medford learned that the hard way.

He suffered a couple of broken ribs when an unoccupied 1937 Allis-Chalmers he had restored kicked into gear and ran over him while running but parked in a shed on his Franklin County, Illinois, farm.

“I had just got it going, and I called my wife and asked her if she wanted to come out to look at it,” Medford said. “Before she got there, it jumped into gear. I tried to get out of the way, but it went right over the top of me. I jumped over the fender, yanked it out of gear and finally shut it off.”

The tractor was the first on the farm, purchased by his grandfather more than 70 years ago. Medford found out that the long shifter on that model had a tendency to move into gear when there was a lot of vibration.

“Back then, when they had it in the shop they would chain the tractor to the floor,” Medford said.

Such an accident is unlikely to happen today with small tractors, since most are designed to shut down whenever the operator gets off the seat. But it’s not as if manufacturers ignored safety in the past.

“Manufacturers have always been focused on safety,” said Dave Flamme of Case IH. “The earliest tractors had warnings and shielding, though it was minimal. Early tractors required the operator to be a part of a safe operation. That has changed.”

One safety breakthrough that many believe has saved the most lives is rollover protection systems, commonly referred to as ROPS. Reinforced bars around the cab help to protect operators in case of a rollover.

“Without question, ROPS are No. 1 when it comes to safety improvements,” said Rick Haun of Shawnee Mission, Kansas. Haun writes a column about farm equipment and was with John Deere for years. “It’s my understanding that John Deere developed that and had a patent on it. But instead of keeping it and using as a marketing ploy, they decided to give it to the industry, and it was quickly adopted by other manufacturers.”

Salah Issa, a University of Illinois professor in agricultural engineering, agrees that rollover protection is the most critical safety improvement in tractors over the years.

“It’s definitely the ROPS,” Issa said. “That is something that is still significant.”

He said there are many older models operating on farms that don’t have modern rollover protection. Rollovers still account for about 130 deaths annually, according to the National Safety Council. Half of the 4.8 million tractors in the United States don’t have ROPS, despite the availability of retrofitting.

But while safety has improved over the decades, tractors still can be dangerous machines. Issa, who is researching farm safety history, said a 2004 study found that tractor-related incidents accounted for 250 deaths annually in the United States, representing more than a third of fatal accidents on the farm. Over the past 20 years, tractors were involved in half of all farm injuries, he has found.

Another innovation that has improved safety is a change in the basic design. Most early tractors had a triangular configuration, with a wide wheelbase in the back and two small wheels in the middle of the front. The design helped farmers get a better view of the field ahead of them, allowing them to guide the machine past rows when cultivating, but also made it less stable.

“Clearly, the smaller-wheels- triangle design on any slope or hillside was treacherous,” Haun said. “When we went with the wide front, that was a game-changer.”

Moving parts on tractors have long been the source of accidents, but manufacturers over the years have added more shields and other protection.

“General power takeoff shielding and protection have prevented a lot of injuries,” Haun said. “People get into a hurry. All it takes is a loose sleeve or handkerchief in your pocket and it will get you in a moment. I put that very high on the list of safety things.”

“Around the PTO (power takeoff) we have interlocks and ways to control it outside of the cab,” he said. “We put the PTO engagement switch on the rear fender in a position that moves the operator out of the zone but still provides convenience.”

The advent of slow-moving vehicle signs on tractors has helped reduce road accidents involving tractors. Better lights have also contributed to safety both on and off the farm, according to Flamme.

“We dim like cars do now, which wasn’t always the case,” he said. Today on the letter-series Internationals, those lights are dual purpose — headlights and work lights. They’re more functional.”

Improved lighting has made working late into the night safer, according to Haun.

“With the lighting systems on tractors today, a lot of guys are running later, especially during planting season,” he said. “Having exceptional lights is almost like being at a stadium for a night game.”

Many features added for convenience have also improved safety.

“There are things that customers want but also helps them,” Flamme said. “Cabs contribute to safety, making the operator more comfortable and less fatigued. That makes it safer to operate.”

Overall, tractors are much safer today. But there will always be dangers that require diligence.

“We’re doing better,” Issa said. “We used to get 30 to 40 incidents every year in Illinois. For the last six years we’re averaging less than 20. That’s good news.”

The advent of autonomous machines may be another safety improvement, but Issa sees issues there also.

“They seem safer, but there’s a strong worry that people are not going to use these autonomous tractors the way they’re designed,” he said. “I read about a case where a farmer was giving it more and more jobs. He put a wagon behind one. He actually ended up making a mistake and got run over by the autonomous tractor.”

Farming and accidents have long been intertwined. The Occupational Safety and Health Administration places agriculture 10th on its list of mos…

Geneticist becomes a ‘professor of popcorn’

CHAMPAIGN, Ill. — Popping popcorn might not be the first thing that comes to mind in teaching genetics or genomics.

In mid-year looks at land prices in several Midwest states, prices have soared so far.

GALESBURG, Ill. — As a young girl, Liz Hulsizer was impressed to see her mother, Sally Bomwan, drive a 2-ton grain truck at the family’s weste…

Ag schools in the Corn Belt are holding their own, for the most part. But some are doing better than others.

Doing volunteer work in East Africa, Joy Kauffman, an Illinois mom of two teenage girls, saw how children like hers were hungry and lacked bas…

EFFINGHAM, Ill. — When Gustie Unkraut was not allowed to drive anymore, at age 90, it was life changing.

MARION, Ill. — Todd Goodman jokingly refers to himself as a “bug rancher.” But he’s serious about his work.

Availability of parts a concern as harvest looms

Supply-chain issues are easing, but many farmers are holding their breath as harvest nears, hoping they don’t suffer equipment breakdowns that…

BENTON, Ill. — This community is on the move.

Mark Medford climbs onto an antique tractor that was first purchased by his grandfather. The long shifter on his left once jumped into gear while the machine was in neutral, and the tractor ran over him.

Mark Medford uses a hand crank to start the engine on his 1937 Allis-Chalmers tractor.