MACOMB, Ill. — Trevor Toland is an award winner in not one but three careers of service.

The past president of the Illinois Beef Association has won awards for his leadership and sustainability practices in farming, particularly his intensive pasture management for cattle. In 2006, he was Commercial Producer of the Year.

Toland was a school teacher for 32 years and a winning basketball coach at TIV school district at Table Grove in western Illinois. He played basketball in college after winning a scholarship to the University of Iowa.

And, he is a veteran of the U.S. Army, earning an Army commendation medal for “meritorious service” which has a spot on his memory wall today with other photos and awards.

“I tried to look my best and do my job exactly how it was to be done,” he said, looking at a photo of himself in uniform during his Army days.

Toland is a second-generation farmer whose parents bought the place he calls home in 1951. It features 400 acres, primarily gazing land, with 265 acres of intensively managed pasture, 50 acres of woods, about 63 acres of crops with ponds and nature taking up the rest.

Toland became a farmer in 1969 when he returned from military service having earned the rank of first lieutenant. He worked weekends on the farm until his father died in 1990 and took over full-time. He farmed and taught full time for 11 years. He recalls being exhausted on Friday when the basketball game was over.

“I don’t really know how I got the job done,” he said of managing a farm and a teaching career at the same time. “A person gets geared up for whatever they need to do.”

In 2009, the Tolands sold the cow-calf operations when he was 65 years old and converted to custom grazing. Today there are often about 80 cows grazing the pasture.

The entrance to his three careers started when he enrolled in the University of Iowa in Iowa City. At that time, “when the Vietnam War was hot and heavy,” males attending land grant colleges were required to participate in two years of ROTC, he said.

He could choose between the Reserve Officers’ Training Corps with the Air Force or with the Army detachment. He chose the Air Force, and was an outstanding cadet in the six weeks of training in Lincoln, Nebraska. But during the physical, his eyes didn’t pass. He then joined the Army and took their training.

He says training he received in the military benefited him there and throughout his life.

Toland knew he would likely get called for the war, so he signed on for active duty. After he was commissioned as a Second Lieutenant in August 1966, he went back home to wait for a call. He waited almost a year working part-time teaching and on the farm. He was assigned to the Military Police in August 1967 with training in Georgia before taking a position at Fort Carson in Colorado Springs, Colorado.

“I expected an order to go to Vietnam within a year,” he said.

That order never came. Instead, he served two years in active duty with a military occupational specialty of confinement, working as an assistant warden with between 250 and 350 prisoners.

Most prisoners were soldiers who went AWOL. Those who were absent without official leave were usually sentenced to about six months.

“If they were sentenced to more than six months or had a second sentence, they were sent to Fort Leavenworth. It was a darker place,” he said.

There were a wide variety of prisoners. Some were there for assault and battery. Some were just out of high school, didn’t respond to the call to service and were picked up in their home towns for other offenses.

“Others wrote letters to their Congressmen to get free from the system,” Toland said.

The work at the Colorado prison got harder in the summer of ‘68 when civil rights riots broke out across the country. Soldiers arrested at the riots were sent to Fort Carson.

There were about 800 MPs in training and about 2,500 soldiers on base.

“Every weekend during the civil rights riots, a battalion of MPs would load up jeeps and riot gear to go to Peterson Air Force Base. They were loaded into big transport planes to be were flown to a riot city, like Chicago. They would be there all weekend. On Monday or Tuesday they would be back,” he said.

“It was a very tumultuous time. There were a lot of protests against the Vietnam War and protests for Civil Rights. At the time it involved thousands of people.”

A military police officer had to be 100% on, or he would have a tough time.

“You had to be all the way in. You had to perform and do the job,” he said. “The education I got there was topnotch. I didn’t forget it.”

Some of the skills he learned helped with the 15 years he taught social studies, history and geography to junior high school students in western Illinois. He was also a sixth grade teacher of math, science and reading and in his last two years head teacher (with duties similar to a principal) at a kindergarten to sixth grade school in the Table Grove school district, about 20 miles southeast of Macomb.

Toland and his wife Jane, raised three daughters on the farm. The oldest is a zookeeper in San Diego, the youngest daughter worked for the Field Museum in Chicago and now manages a Hallmark store in Milwaukee and middle daughter is a sociologist in Rockford. Jane passed away in December.

Today, the 78-year-old farmer leases his land to Carson Welsh, a young farmer who pastures cattle, custom grazes there and grows crops. Toland still has a hand in pasture management and is a mentor to Welsh, who will eventually purchase the farm from Toland’s daughters.

In the meantime, Toland continues to share lessons he learned during his farming career. Toland’s farm, River Oak Ranch near Macomb, Illinois, will host an Illinois Beef Association Summer Conference and Illinois Forage Expo tour June 8. People will get a first-hand look at the complex “regenerative, adaptive, management intensive rotational grazing system,” he said reciting the long, official term for his pasture system.

“Right now we need more cows,” he said May 12, as the pasture is lush and the cows can’t keep up. “I’ll always be refining it, to keep making it better.” 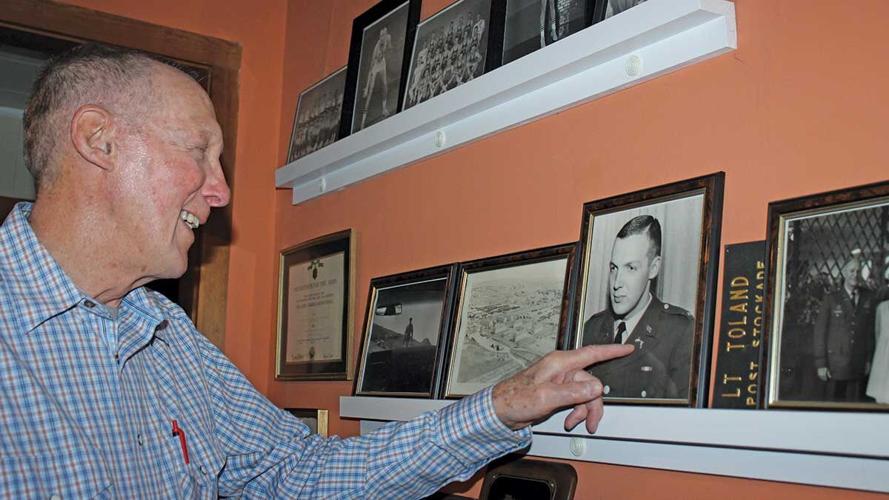 Trevor Toland smiles at a photo of the polished younger version of himself in formal attire as a first lieutenant serving in the U.S. Army. He was in the Military Police from 1967 to 1969 during turbulent days of the Vietnam era.

Trevor Toland leases his land to Carson Welsh, a young farmer who pastures cattle,  custom grazes there and grows crops. Toland still has a hand in pasture management.