DESOTO, Ill. — It’s been nearly 80 years since Jack Tripp battled Germans in the mountains of northern Italy, but he remembers it like it was yesterday.

He was thrust into a hot mess virtually the minute his transport ship arrived in Europe.

“The first 24 hours were as bad as anything I went through over there,” said Tripp, sharp and sassy at age 97. “We were always in a battle here or there.”

As a member of the 88th Infantry Division, Tripp landed in Naples in 1944. He spent eight months in German-held Italy, where combat was a regular occurrence. Though death and destruction was all around him, he managed to come home without a scratch.

His life began on the family farm in Jackson County. His father had contacted the doctor because Tripp’s mother was in labor. The doctor said she was not yet ready to give birth, and he headed out for another house call. But it wasn’t a false alarm after all.

“My dad had to help with the birth,” Tripp said. “He cut the umbilical cord.”

His parents never registered the birth, so Tripp didn’t have a birth certificate. When he became draft age, he had to report to the clerk in the county seat of Murphysboro with an affidavit signed by his mother attesting the date of his birth: Aug. 11, 1924. After 17 weeks of basic training in Texas, he took a train to Newport News, Virginia.

“The next day I was on a damn ship,” he said. “There were 96 ships in the convoy. We zigzagged all across the Atlantic because the Germans had submarines. We had a sub chaser in our convoy.”

Tripp credits life on the farm with providing him with the skills, strength and stamina to survive the hell of war. He also developed quite a talent for cursing.

“When I was a kid I plowed ground with a team of horses,” he said. “I hunted with a .22 rifle. A rabbit would get up and I’d shoot that (SOB) in the head. I was a good rifleman.”

He carried an M1 carbine throughout his time in the service. He isn’t sure if he ever killed anyone. “I shot at them and they went down in the weeds. I don’t want to know.”

One particularly memorable battle took place in a vineyard, where several German soldiers were holed up in a house. Tripp crawled up the hill looking for water and came across five dead GIs.

“I hauled ass out, went back down and told the captain,” he said. “Just before dark we took off into a little wooded area. The Germans opened up on us with 81mm mortars. The guys down in the woods were getting tree bursts and hollering for medics. They were shooting the hell out of us.”

Tripp and two others headed up the hill through the grapevines; Tripp was the only one who made it to the top.

“Tate must have got shot on the way up, and then someone opened up on me with a machine gun,” he said. “I hit the ground and rolled, something I’d learned in basic. They had been trimming the vines, and my britches snagged on something and tore almost all the way off.”

He still had his rifle in the darkness and stuck it into the belly of a soldier and was ready to pull the trigger.

Sure enough, it was a fellow GI. Reinforcements arrived and began attacking the farmhouse occupied by the Germans.

“We started throwing mortars on them and they started running,” Tripp said. “The only thing there when we reached the place was a motorcycle that they’d left.”

Tripp had numerous close calls, including once surviving friendly artillery fire after his unit had reached a forward position earlier than anticipated. During a long hike he was just a few feet from a fellow soldier who took a sniper round through the heart.

Even before being drafted Tripp expected to be in the war, and he prepared at home.

“I was a country boy and a farm boy. Before I went into the service I knew I was going to end up in that damn thing,” he said. “I would go into the woods and play soldier. I’d dart from one tree to another, protecting myself. I used that when I was in Italy.”

He doesn’t claim to be a hero, only a survivor.

He wanted to continue farming when he returned, but his father had rented out the family farm. Later it was sold to a coal company.

“I didn’t have enough money to farm,” he said.

Instead, he became a carpenter. Today he lives alone in a modest house and spends much of his time enjoying his favorite hobby, singing karaoke. Tripp sings once or twice a week at various venues.

War is a constant companion.

“I saw eight months of combat,” he said. “I didn’t get hit; I was damn lucky. I was a farm boy and I knew how to take care of myself. I managed to get through it without getting killed.” 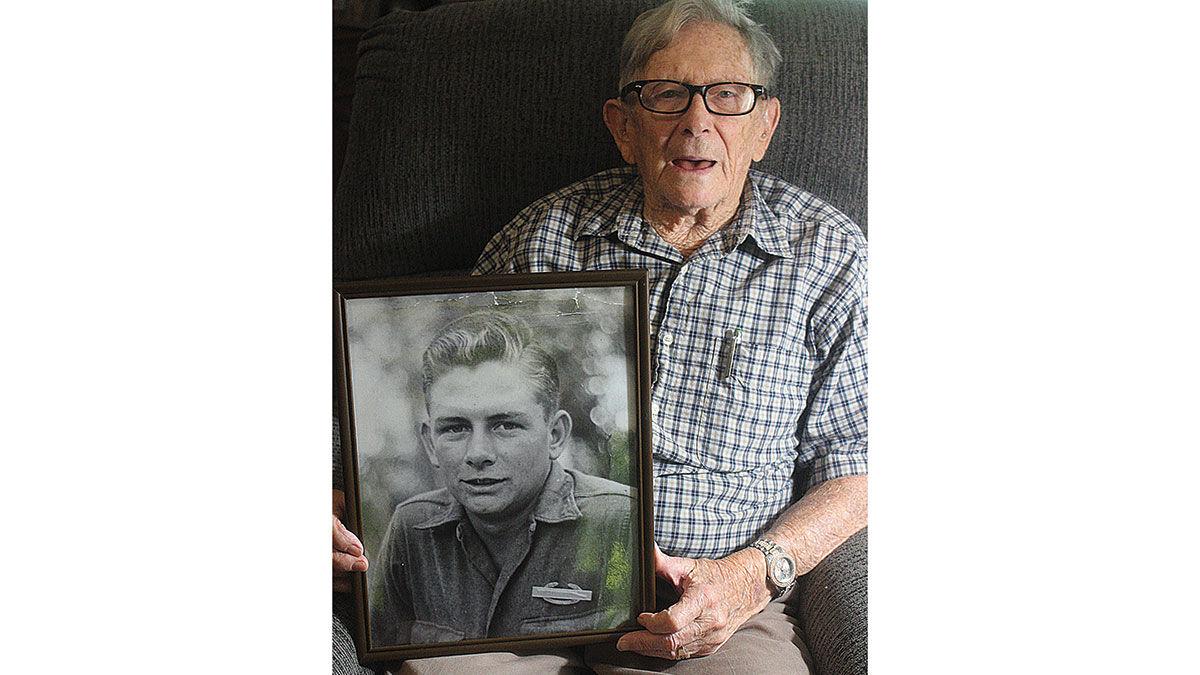 Jack Tripp holds a photo of himself during his time in the U.S. Army. Tripp spent eight months in combat in northern Italy as part of the 88th Infantry Division. 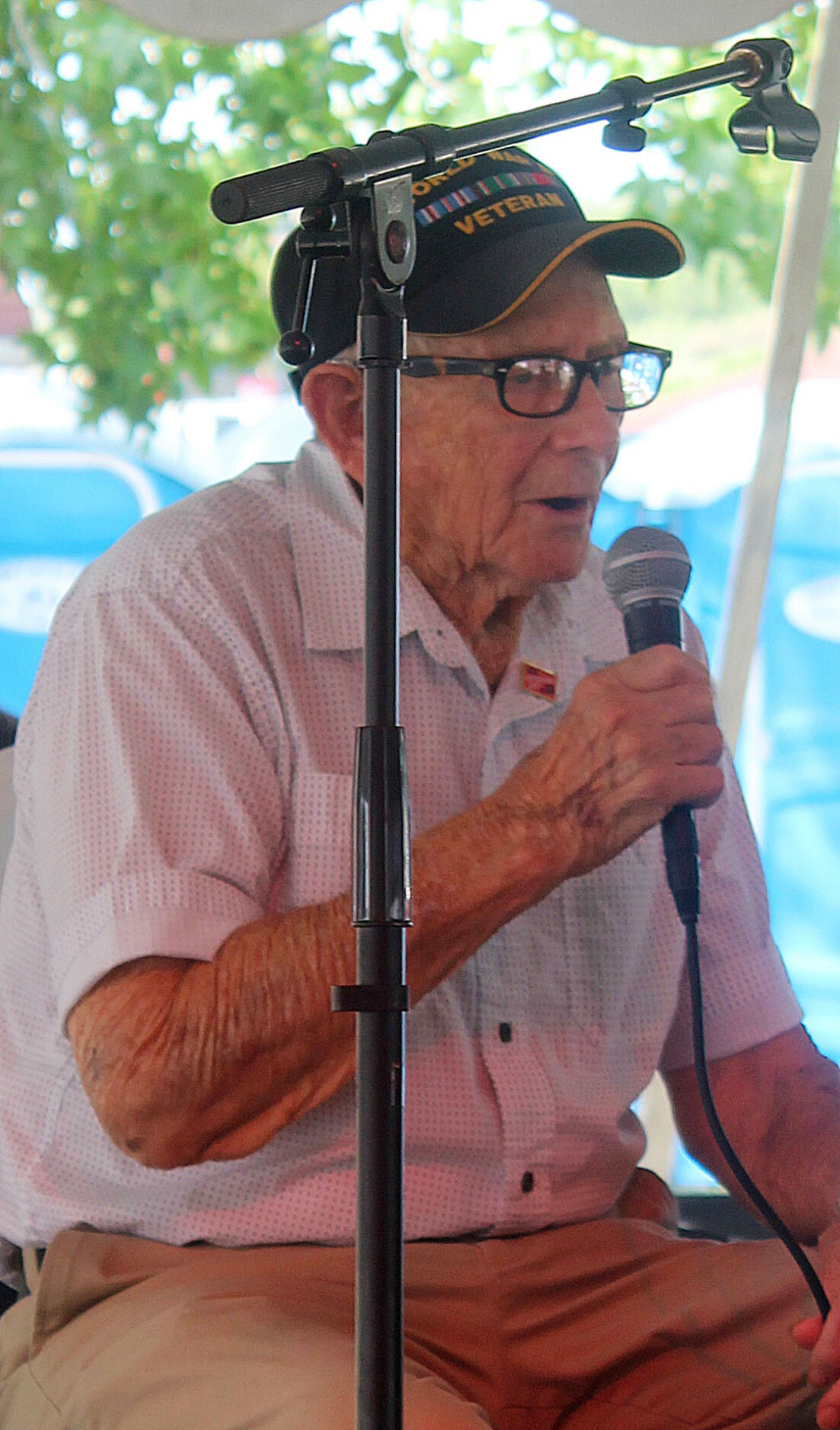 Jack Tripp engages in his favorite hobby during a karaoke contest at the Du Quoin State Fair.