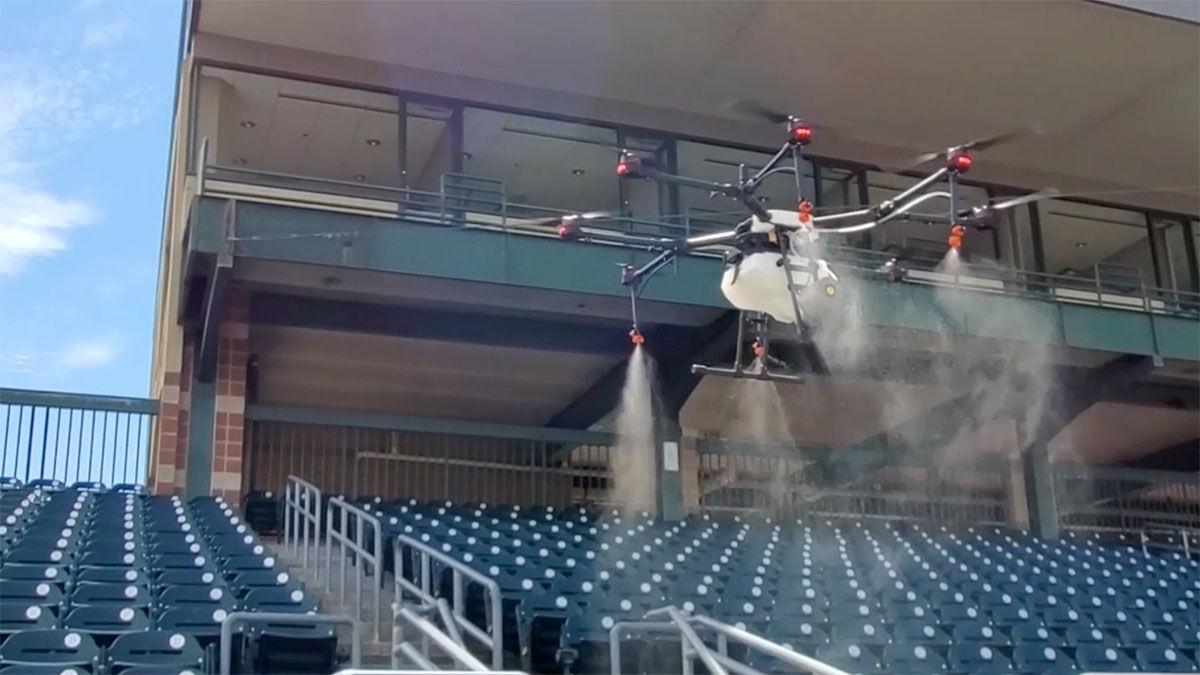 Rantizo is using their drones to test out sanitizing stadiums, such as Principal Park in Des Moines.

Michael Ott shows off the new autonomous filler Rantizo hopes will continue to speed up the spraying process.

IOWA CITY, Iowa — While the country has every intention of enjoying their favorite sports this year, coronavirus has thrown some uncertainty in the mix.

As sports organizations like the NBA, NHL and MLB look to get their seasons back on track and the NFL and NCAA hope to start their respective seasons on time, fans are hoping they can watch their favorite teams compete again soon. One agriculture company is hoping they can help make that happen.

Iowa City-based Rantizo, which specializes in spraying fields with drones, is hoping they can utilize their technology in other capacities, such as sanitizing stadiums for fans to safely watch contests.

“We are now actively quoting for all the major sports, so NHL, NFL, NBA and MLB,” Rantizo CEO Michael Ott said. “We want to get people back. We are ready to go spray stadiums as soon the games are going. We are excited to get that moving.”

Ott said they’ve also been in communication with some major college football teams to sanitize the stadiums if the season progresses as hoped. They have also talked with county and local fairs about using the drones for concerts and other events, but many of those are starting to be canceled.

He said the process for spraying sanitizer is the same as any chemical he would put in a field, and the drones they utilize would operate the same.

“They are all liquids that you mix up,” Ott said. “We know what our rate needs to be and then we can just go spray. We use collision avoidance on our drones and can follow terrain, so if you are in a stadium, you are just going straight up the seats, just like going up and down a hill.”

He said if they are utilized for sanitization, they would fly through the stadiums after games and spray with their drones, so it would be ready for the next game, which for baseball could be the next day.

This all comes as Rantizo is looking to introduce some new products, including an autonomous filler for the drones, which will allow operators to work even quicker in the fields. Ott said with the filler, they will be able to bump their speed from 14 acres per hour to 23 acres per hour with one drone. When they use three drones flying in unison, he thinks they can cover 60 acres per hour.

“That’s essentially what a tractor is,” Ott said. “Then remember that we are ideally only spraying the areas that need it. I might be spraying 60 acres an hour covering 100 or even 300 acres.”

Rantizo isn’t the only company looking to be helpful among the pandemic, as other agriculture-linked businesses, such as South Dakota ethanol giant POET, have pivoted some of their plants to producing hand sanitizer.

John Deere has also changed some of their facilities to focus on face shields.

Deere said their employees at the Moline Seeding Group factory started with a goal of 25,000 face shields but now have materials and supplies for an additional 200,000 shields.

The shields are being donated to many area frontline workers who have been dealing with coronavirus from the beginning.

“We knew that we needed to do more to help the true heroes in the fight against this virus: the frontline health-care workers,” said David Ottavianelli, John Deere director of strategic projects and labor relations, said in a press release.

“Our employees wanted to do more for the local community, and we are so proud of their actions. They are the real stars.”