WASHINGTON, D.C. — The strangest part of visiting Up Top Acres is when the owner reminds people not to get too close to the edge.

It’s not a phrase you hear at most farms or gardens, but here the edge is the top of a 10-story building in the middle of a city. It’s a bit of a new frontier for food production — the urban rooftop garden.

Up Top Acres in Washington, D.C., has gardens on 18 buildings totaling about 3 acres. Founded in 2014, it now has three co-owners and eight employees. It is a for-profit enterprise, but its profits may not come from the places you would expect.

“We’re owner-operators,” says Kristof Grina, one of the three owners. Grina grew up in Washington, D.C., and earned a degree in plant and soil science at the University of Vermont before working on an organic farm and helping to install green roofs in the area.

In 2014 he and his partners started Up Top Acres. The city had been dealing with environmental issues related to runoff into storm sewers off of many large metro buildings. In response there was a push for so-called “green roofs” that would be covered with soil and plants instead of more toxic roofing materials.

At first, the fledgling company tried to sell its produce to restaurants and to consumers. Soon the owners began to see that the real market was in convincing building owners to let them manage their rooftops because that would help the owners meet environmental rules, reduce runoff issues and provide a better environment for the companies and individuals leasing space in those buildings.

There is a tax credit in the area for green roofing. The tenants have a green space they can access right in the building. And the tenants also have access to fresh vegetables and the idea of locally grown food. Today the company still grows vegetables and flowers on its 18 rooftops, but much of the produce goes to food banks and other charitable efforts.

“We need to take advantage of these spaces,” Grina says.

But managing a rooftop garden isn’t always easy. The soil is hauled up to the roof. It is a special mixture that is designed for its rooftop purpose. The labor is mostly manual. And the job involves working around situations such as window washers who anchor their rigs on the roof.

The good news is that deer and other four-legged pests aren’t really a problem. And the roof does a good job of slowing water flow during heavy rainfall events. That water is used to grow crops instead of just shooting straight into a storm sewer.

There is one other advantage of the rooftop garden, Grina says. It allows him and his co-workers to talk to urban audiences about agriculture and about where their food comes from. 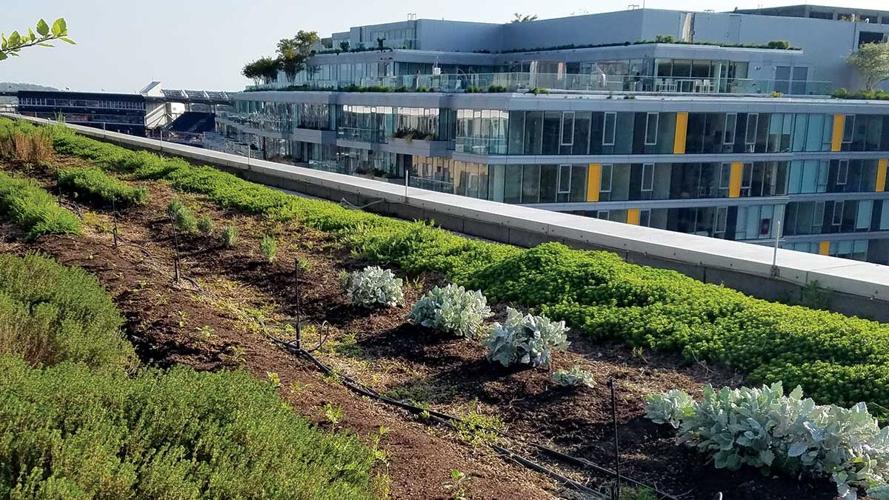 Up Top Acres in Washington, D.C. has gardens on 18 buildings totaling about 3 acres. 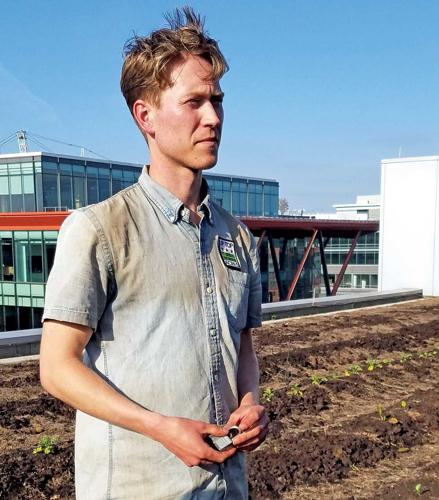 Kristof Grina talks to a group at Up Top Acres in Washington, D.C.