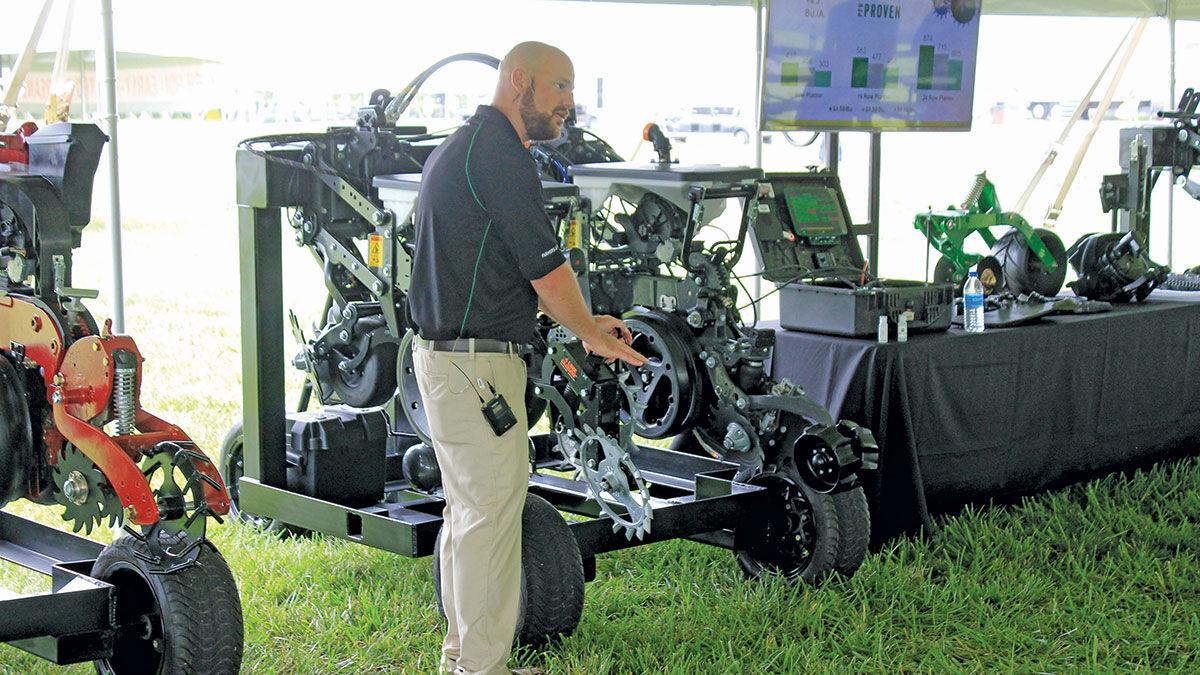 Jason Gahimer shows different aspects of planters that can have a major impact on seed success. 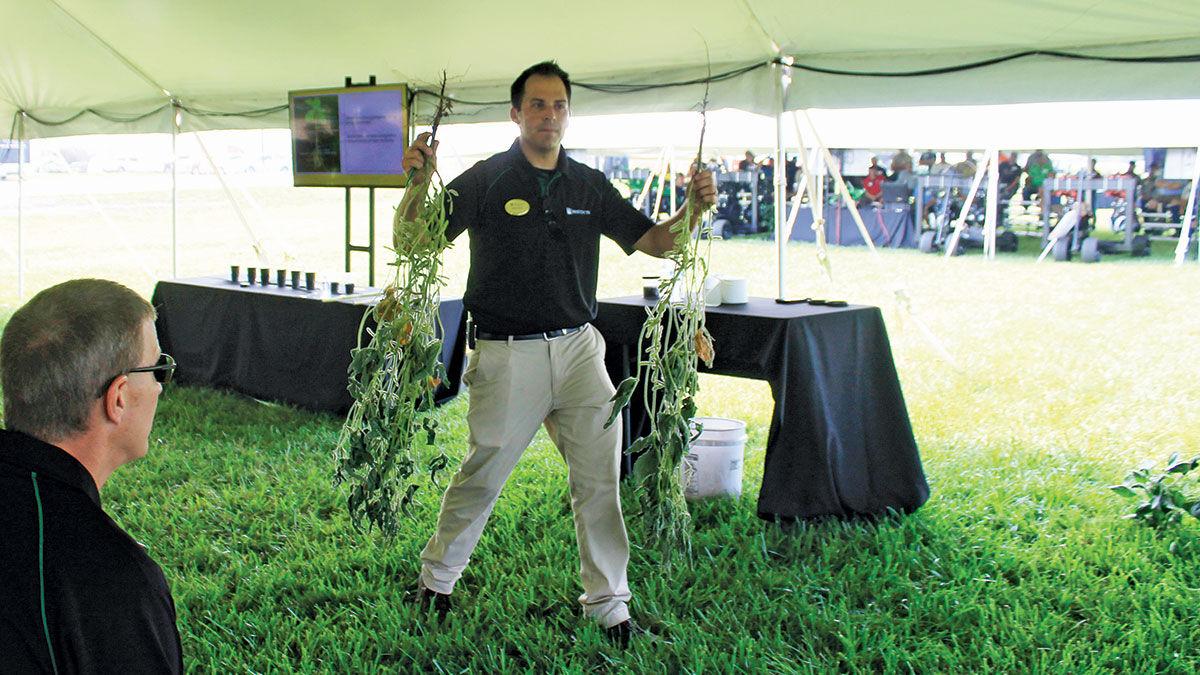 COLFAX, Iowa — It was a hot, humid day in central Iowa, and while harvest is in sight, the focus was already on next year.

Farmers gathered here for the annual Beck’s Iowa Field Day, where many agronomists were discussing what factors to consider when getting started with the 2022 crop.

With expectations for high input costs to stick around, getting the crop off to a good start will be key to 2022 yield potential.

“Well sown is half grown,” said Scott Dickey, a Beck’s agronomist from southern Missouri and Kansas. “If we plant into fit soils, that prepares us as long as Mother Nature agrees with us, but that can be a battle as well.”

There are too many factors to consider to commit to just one depth, he said. Moisture, soil conditions and temperature are just a few of those variables, but there are some guidelines to go on, Firle said.

“No shallower than 2 inches on corn and no shallower than an inch and a half on soybeans,” he said. “The data is firm on that, and use that as your guard to catch when you want to jump into the pool.”

Firle said the heavy rains that have become more prevalent in the Midwest can compress the soil and make the seed appear shallower. Firle poured the equivalent of an inch of water over a cup of soil and showed how it can erode.

“Our rains are all coming in quickly,” he said. “I had half a dozen growers this year get upset because they said ‘I know I put it in at 2 inches.’ When we dig the plants, they are finding inch and a quarter seeds in some spots.”

While many farmers have learned planting early can be a benefit, Dickey emphasized that point with Beck’s 20-year trial data showing April-planted beans are giving an 8% increase above average yield. He noted that planting in early April might not be possible, so it’s more important to not force the issue.

“If it’s not fit within the first week of May, it’s just not fit,” Dickey said. “I don’t want you to rush things. There are too many fields, in Missouri especially, people rush things. If we plant timely and well, that’s half the battle.”

If it is possible to plant early, however, it’s good to take advantage. He said soybeans add a node every 3.7 days through R5. Getting more soil time for the seed means more nodes, which means more yield potential.

“In our (early April) plant, they averaged 38 nodes per plant,” Dickey said. “In the (late May) plant, there were 27 notes per plant. If we have a 14-day delay in planting, that can be a loss of four nodes.”

While the details are important, it can’t be accomplished without the equipment to put the seed in the ground.

Jason Gahimer, a central Illinois agronomist, said finding equipment that will ensure nitrogen gets applied effectively will help get the most out of crop development.

“I’m not saying you need it 3, 4 inches deep, but as long as it’s an inch deep and a couple inches over on the side (of the row), that’s perfect,” Gahimer said. “The only time you can put it that close to the seed on each side is at planting. The more you can do to put it there, the better.”

He said using equipment to get nitrogen in the soil is worth it, as extra bushels will quickly absorb some of those extra costs.

Gahimer also recommends upgrading a planter to a hydraulic downforce system. He said to skip air and spring systems as they can’t keep up as effectively for optimal performance in the spring.

“Air cannot automate fast enough on the fly,” he said. “It can’t respond fast enough, especially for some of those newer and heavier row units.”

For equipment to operate at peak performance, Firle suggested allowing more time after any tillage passes and making sure the closing system or closing wheels are working properly. He also reminded farmers that soils can change from field to field.

For farmers with cover crops, Indiana-based seed manager Ryan Moore said having effective planting in the spring starts in the fall.

Moore said planting cover crops the right way will make life easier in the spring, and when it comes to planting effectively, finding the right down force is a “must.”

“When we are planting green or planting into something that’s not quite dead yet, it clears a path and all the residue out of the way,” Moore said. “Being prepared is important. It’s farming, so Plan A never happens. Planting into cover crops, especially with no till, there’s more management. Tillage guys are usually out there about two days earlier than us, so you have to be patient.”

Fall armyworm is native to tropical regions in the western hemisphere. It can only successfully overwinter in the southern U.S. (Texas and Florida), but the adults are strong flyers and capable of long-distance migration to northern states.

Since early August, Iowa farmers have been reporting soybean fields or parts of fields with yellow or greenish-yellow leaves in the upper canopy which resemble early senescence and sometimes nitrogen deficiency symptoms. The soybean growth stage is mainly R4 to R5.

Now is the time to make plans for cover crop planting if you have not already done so.

Establishing prairies may be a popular conservation practice, but there is some prep work that needs to be done before you welcome those pollinators.

Jason Gahimer shows different aspects of planters that can have a major impact on seed success.