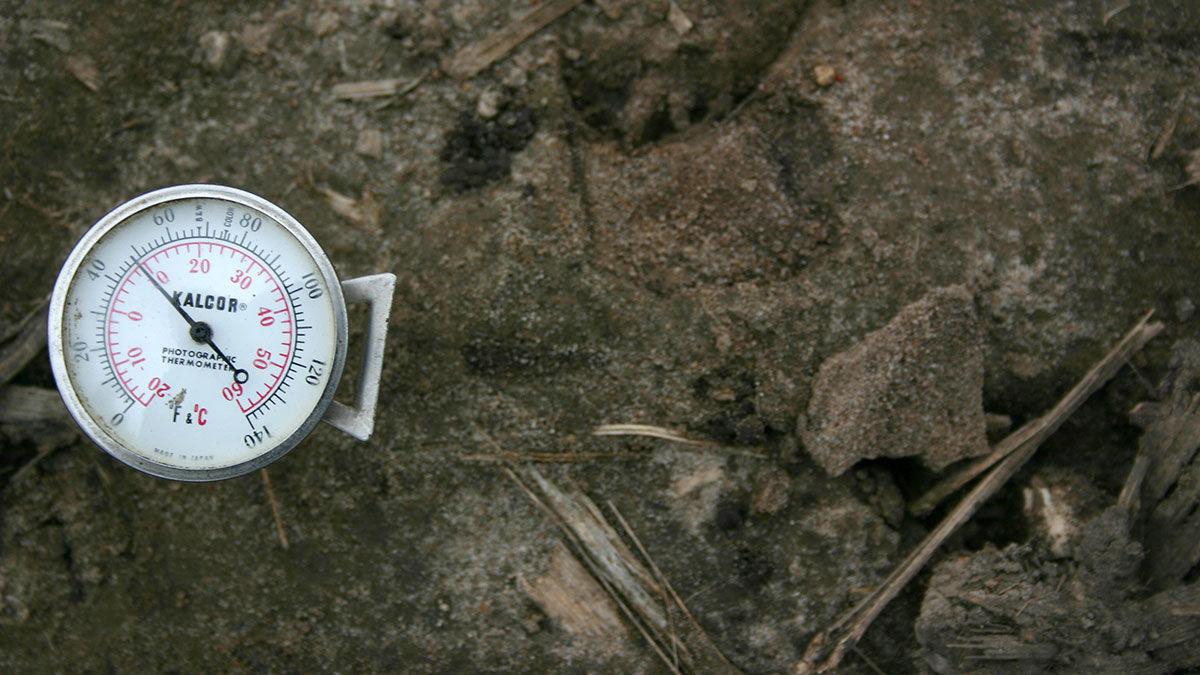 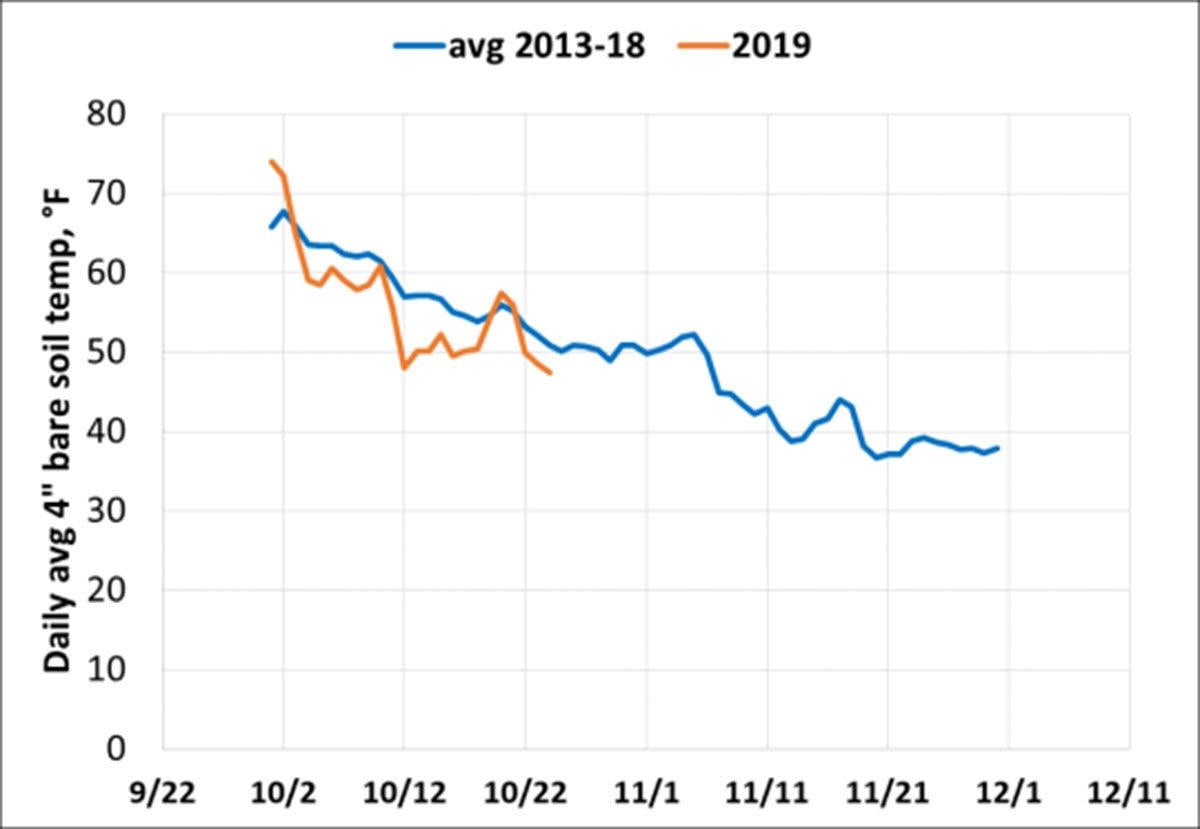 Success, compared to spring or sidedress timing, can be enhanced by following several long-standing suggestions:

Most years in Iowa, soils cool below 50 degrees in late October and early November. Will soils be cold and stay cold early this fall? Soil temperatures the past few days have been near or below 50 degrees in much of Iowa, especially the northern two-thirds of the state, and 6-10 day forecasts are for below normal temperatures, so odds are looking like early and continued soil cooling.

Soil temperatures can be found at several websites. One site gives the 3-day, 4-inch depth soil temperature estimates for each county, and the 6-10 day weather forecast. That site can be accessed through the Agronomy Extension and Outreach Soil Fertility web site at https://tinyurl.com/y5e2wl56.

The risk with early application, however, is that temperatures could rebound and nitrification will resume or continue for an extended period, albeit at a slow rate. On the other hand, a risk is inability to get the fall application completed if waiting too long.

Nitrification inhibitors can “pay” but not always. All depends on conversion to nitrate, when converted to nitrate, how effective the inhibitor, and if any major wet/loss conditions are “missed” because applied N is still in the ammonium form which is not subject to leaching or denitrification.

Most nitrate loss occurs in the springtime months, so having ammonium present during those months is important. Fall applied N, to be more like a spring application, needs to have the applied N in an ammonium form — hence late fall application, cold soils and a nitrification inhibitor consideration.

Other common N fertilizers, like granular urea and UAN (urea-ammonium nitrate solution), do not have the initial inhibitory effect on nitrifying bacteria like anhydrous ammonia, and therefore should not be fall applied. For example, research across many years at the ISU Northern Research Farm at Kanawha has documented lower corn yield with fall-incorporated urea compared to spring-incorporated urea.

Triple superphosphate is becoming more available in the Midwest, and is a phosphorus fertilizer option that does not contain N.

What happens when anhydrous ammonia is injected into soil?

Several physical and chemical reactions take place: ammonia dissolution in water, reaction with soil organic matter and clay, and attachment of ammonium ions on the soil cation exchange complex. These reactions all tend to limit the movement of ammonia, with water having the greatest initial effect.

The shape and size of the ammonia retention zone vary greatly depending upon the rate of application, knife spacing, the soil type and soil conditions at injection (soil texture, soil structure, organic matter, and moisture status).

Ammonia moves farther at injection in coarse-textured soils and soils low in moisture. Also, if the injection knife causes sidewall smearing (when soils are wet), then ammonia may preferentially move back up the knife slot.

Movement toward the soil surface can also occur for some time after application if the soil dries and the knife track “opens up” (also due to less soil moisture to retain free ammonia in solution with drying soils). A similar movement within the soil can occur if the soil breaks into clods at application and there are large air voids left in the soil. These conditions can result in greater ammonia concentration toward the soil surface, and greater potential for loss to the atmosphere at or after application.

When ammonia is injected into soil, the initial reaction at the point of release is violent. Ammonia reacts and binds with soil constituents such as organic matter and clays. It reacts with water to form ammonium (NH4+). These reactions help retain ammonia at the injection point.

With the high affinity for water, soil moisture is important for limiting the movement of ammonia, but does not ultimately determine retention in soil. After conversion to ammonium, which is a positively charged ion, it is held on the negatively charged soil exchange complex and does not move with water. Only after conversion to nitrate (NO3–), via the nitrification process, can it be lost from soil by leaching or denitrification.

Is there a maximum ammonia application rate that soils can hold?

The rate of anhydrous ammonia that can be held in soil is not a direct relationship with the cation exchange complex. Soil properties affect the size of the injection zone, but ultimately several other factors are more important, such as moisture content, depth of injection and soil coverage, especially with dry soil or coarse textured soil.

Within agronomic rates of application, there is no real limit or maximum application rate. In research conducted with alternate row injection (example 60-inch spacing in 30-inch row corn), 200 lbs. N/acre has been successfully applied — which is an equivalent of 400 lbs. N/acre per injection knife.

It is the injection depth, soil coverage, and overall soil conditions that determine retention.

If the soil is smearing, breaking into clods, there isn’t good coverage of the knife track with loose soil, and ammonia is escaping (remember, your nose tells you if ammonia is escaping; a white vapor is condensed water, not ammonia which is colorless), then stop and either change the way the equipment is working or is set up, or wait until the soil has better structure or moisture.

Seamann and Sons Windmill and Well Service. For all your