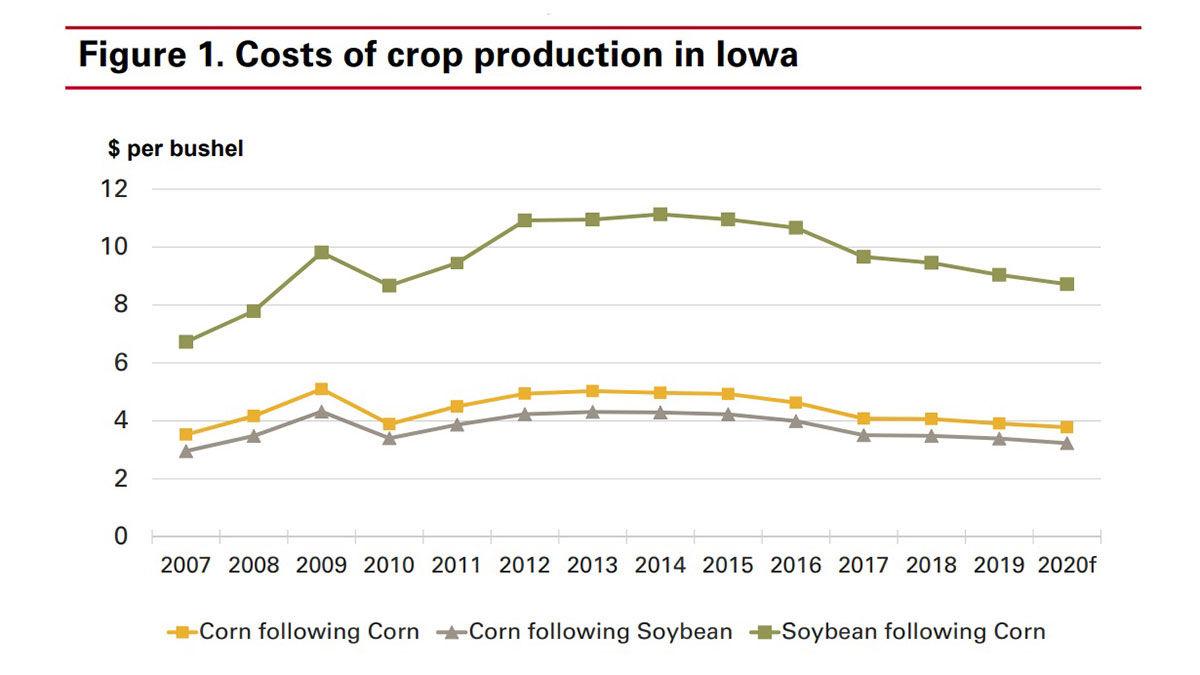 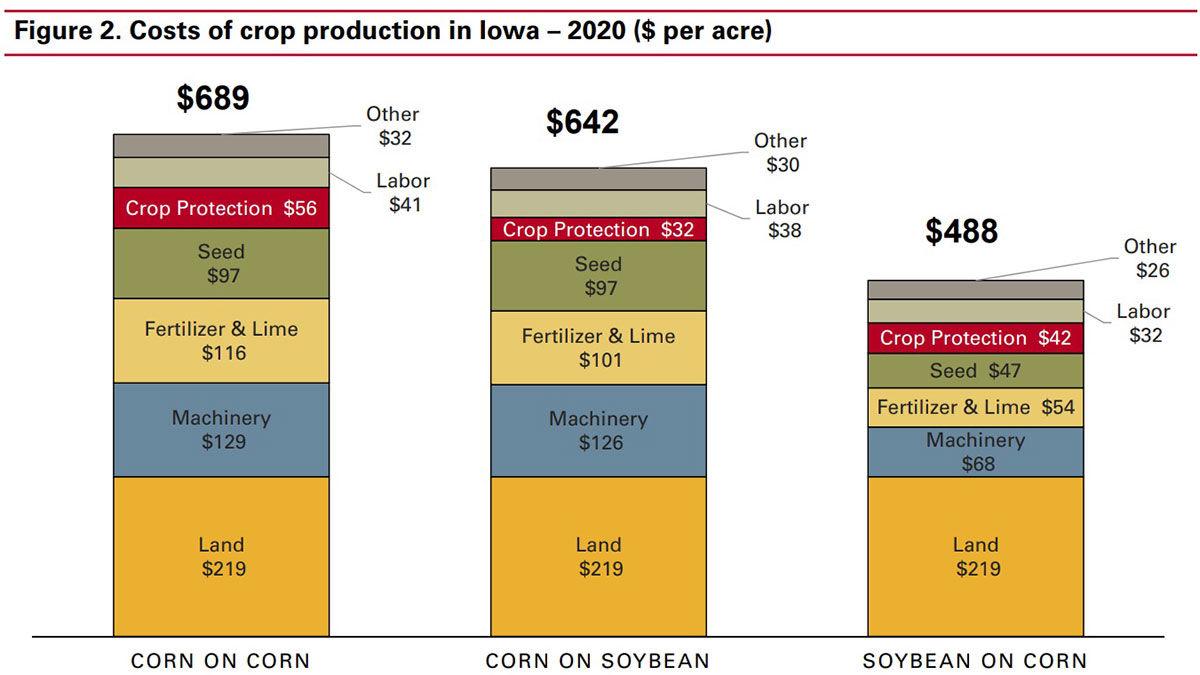 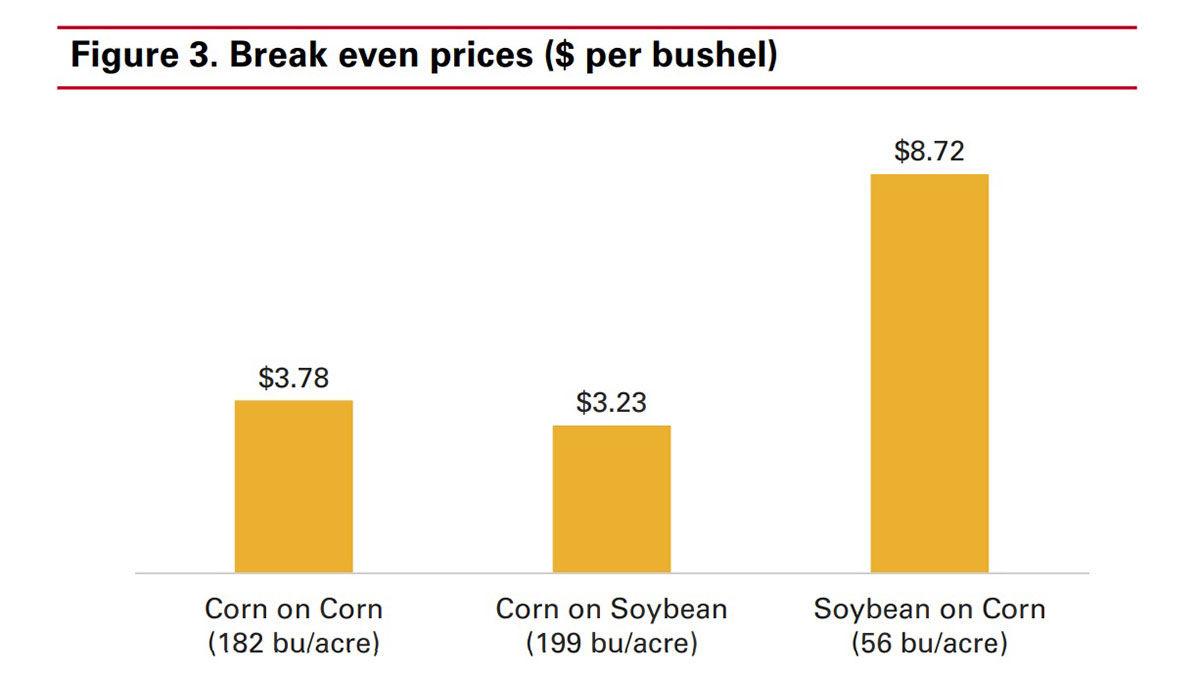 Thin profit margins in corn and soybean production have become the norm over the past five years, increasing the need for proper budgeting and marketing strategies among crop producers.

The latest issue of the Iowa State University Extension and Outreach “Estimated Costs of Crop Production” reports average cost estimates for Iowa farms in 2020, and provides guidelines to help farmers calculate their own costs of production.

On average, the total cost of corn and soybean production in Iowa is expected to decline by 4% from last year. When looking at specific categories, costs increased for labor, insecticide and corn seeds, but declined for other categories.

The cost estimates are representative of average costs for farms in Iowa. Very large or small farms may have lower or higher fixed costs per acre.

The full report is available online through the Ag Decision Maker website, bit.ly/3794Gu1.

For corn, land represents approximately 33% of the total costs of production. Values of $183, $219 and $255 per acre rent charges for the low-, medium- and high-quality land were assumed.

The variable costs represent just over half the costs of production. Of the variable costs, nitrogen and seed costs account for 43% of the costs for either continuous or rotated corn. Nitrogen cost is projected 10% lower than in 2019, at 34 cents per pound, and seed 1% higher at $257 per bag.

Machinery costs are projected to decline by 5%, primarily due to lower drying costs.

There is substantial uncertainty regarding crop prices in the coming season. The most recent U.S. Department of Agriculture projections for 2020-21, published in October 2019, put the average U.S. farm prices for corn and soybean at $3.40 and $8.85.

In this scenario, soybean production would only be profitable for operations with medium and high yields, but the profitability margins could be very tight.

A continuous corn system would not be able to cover all costs, even with high yields, and corn production following soybean would generate $30-$40 per acre in profits.

Current futures prices seem to indicate corn and soybean prices might average $3.90 and $9.50 per bushel in 2020-21, respectively. In this optimistic scenario, soybean production would generate profits ranging from $30-$60 per acre. Similarly, continuous corn and corn following soybean would generate, respectively, $15-$27 and $121-$147 per acre in profits.

Current and future developments in trade, oil prices and weather can steer the profitability outlook in different directions. Given that those factors are outside the control of farmers, it is critical to contain the controllable costs as much as possible to break even and hopefully make a profit in 2020-21.

When using the Iowa State cost of production estimates for 2020, keep several things in mind. First, fertilizer and lime costs include volume and early purchase discounts. Second, farmers paying land rents higher than the ones projected in the report might face higher costs of production.

Operator landowners on fully paid land will have much lower accounting costs, since the cash rent used in the report will only be an opportunity cost and not a cash cost (as it is for tenants). Since 2019, reference yields for corn and soybean budgets in the annual ISU Extension report reflect 30-year trend yields.

Starting in 2020, the average cost of lime is adjusted to account for regional differences in lime application practices (ag lime quality and quantity, and frequency of application). Such methodological adjustment resulted in a one-time increase in the cost of lime per acre from $5.71 in 2019 to an estimated $12.49 in 2020.

In future editions of the report, the annual adjustment in the yearly cost of lime should reflect only changes in average prices.

Producers need to have a strong grasp of their own production costs. Costs of production are not seeing the rapid fluctuations that were seen in recent years, but the trade war and other events create a lot of uncertainty when it comes to profitability on individual operations.

Polly Ruhland is CEO of the United Soybean Board. Born in Florida, Ruhland grew up in various states before earning a bachelor’s degree in Eng…

High prices have many farmers excited about the 2021 growing season.

Despite some signs of pressure, corn rootworm populations have been lower in recent years, according to Nicholas Seiter.

The snow is covering downed and disked cornstalks, but Ethan Crow knows there may still be issues hiding there, thanks to the derecho that whi…

The turnaround was quick, and there’s a sense of optimism in the farm community that is rising from the jump in grain prices. How long it migh…

There was a lot of prep work for next season in Midwest fields after a dry fall, but the latest blast of Arctic air may cause some problems fo…

It’s a constant battle, but there may be new hope in the war against weeds.