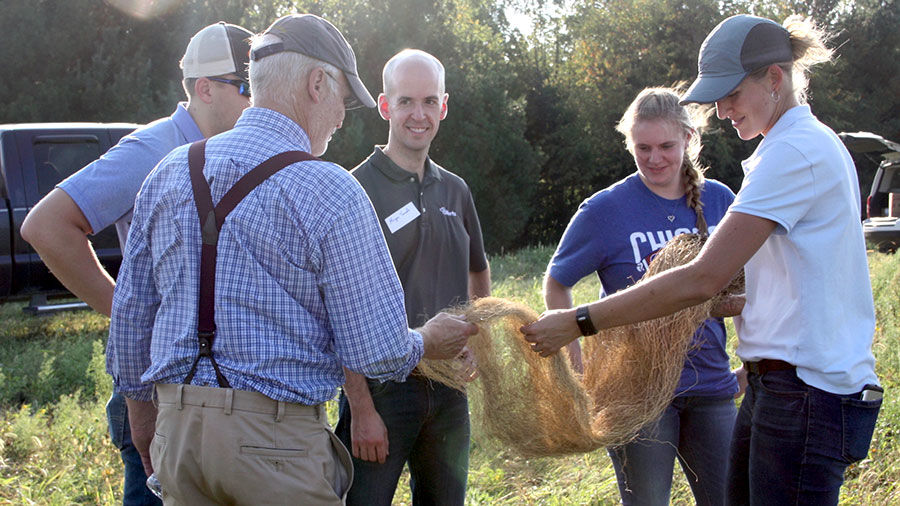 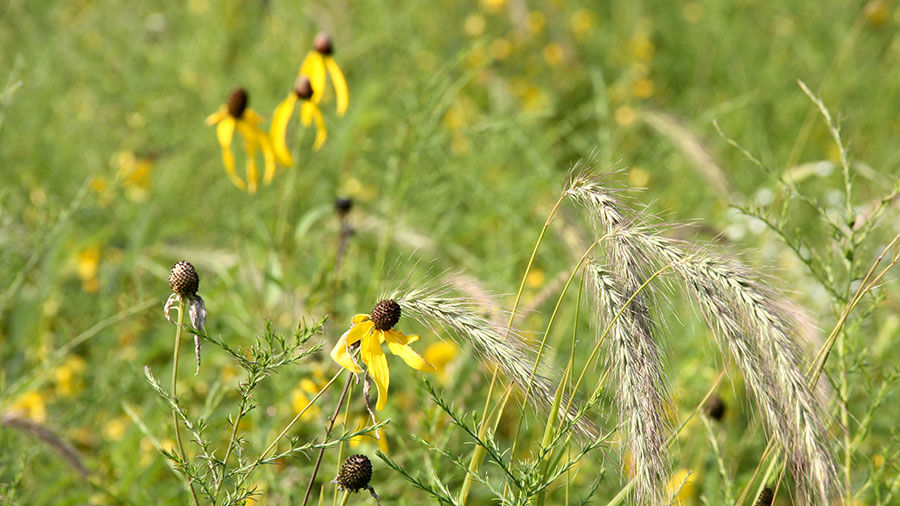 Black-eyed Susan is one of the many prairie species growing in the Roadmans’ prairie.

DIKE, Iowa — Larry Roadman’s family has owned farmland in Grundy County since 1876, when his great-grandparents John and Lusetta Roadman came from Pennsylvania and settled on 400 acres west of Dike.

No Roadmans have farmed the land for many years. Since 1990, Hertz Farm Management has managed the land.

But several years ago, Larry’s son, who was studying for an urban planning master’s degree at the University of Michigan, read a New York Times article about Iowa State University’s Science-based Trials of Rowcrops Integrated with Prairie Strips, or STRIPS project.

“I was drinking my morning coffee at my home in New York and he sent me an email that said ‘Dad, can we do this, and can we do this sooner rather than later?’” Roadman said at a field day at his family’s farm last fall.

Larry saw prairie strips as a way to involve the fifth generation.

He contacted Morgan Troendle, who manages the farm for Hertz, who in turn contacted ISU STRIPS, the Tallgrass Prairie Center at the University of Northern Iowa and the NRCS and Farm Service Agency in Grundy County. New partnerships were formed.

Ten acres of prairie was planted in fall 2016 and spring 2017, and a saturated buffer was installed near the creek that flows through the farm.

“Larry’s family has great ideas,” Troendle said. “They have financial and long-term ownership goals, and they asked us to guide them in how to do this but not impact the farm negatively.”

In addition to growing corn and soybeans, the farm raises seed corn, and they had to make sure they could continue to do that.

Troendle wanted to know how the prairie would impact the farm’s tiling system. ISU research showed there was not much encroachment.

“ISU researchers and partners at the U.S. Fish and Wildlife Service got this idea that we should take a little bit of prairie and plant it into ag fields in Iowa,” Youngquist said.

“If you go back about 200 years, 85 percent of our state was covered in prairie. We got it down to 0.1 percent. If we could reintegrate some of that prairie we could still have the benefits of this black soil and this farm economy, but we could also get some of the conservation benefits.”

Prairie STRIPS research over the last 10 years shows that taking 10 percent of a field and putting it into native tallgrass prairie provides “a disproportionate amount of benefits,” Youngquist said.

“There is 80 to 90 percent less phosphorus and nitrogen leaving these fields and becoming pollution in waterways. There is a 90 to 95 percent reduction in the amount of soil leaving these fields. The biodiversity provided by the prairie benefits birds, bees, butterflies, beetles, all native insects,” he said.

The research has expanded to 43 farm demonstration sites, primarily in Iowa but with two sites in Missouri, four in Wisconsin, one in Illinois and one in Michigan. There are many more in the planning phase that will go in this fall and next spring.

“You strategically place a little bit of prairie in crop fields to intercept water as it’s flowing off that field,” Youngquist said. “The stiff stems and deep roots of the prairie plants filter the water. If you space the prairie in such a way that it doesn’t interfere with equipment like planters and sprayers, even though you’re putting buffers in the field, you’re not increasing any time or efficiency for that farmer and you’re getting all these benefits.”

The UNI Prairie on Farms program, which began in 2015, has planted almost 60 acres of prairie for 13 landowners in the Middle Cedar River Watershed.

“We hear about concerns for soil health, water quality and quantity and lack of habitat, prairie can answer all those needs,” said Ashley Kittle, UNI Prairie on Farms Program manager.

During a field day last fall at Roadman Farms, Tallgrass Prairie Center researcher Justin Meissen said the new 10-acre prairie strip looked good. He was pleased with the diversity of grasses, legumes and forbs (wildflowers). University of Northern Iowa’s Prairie on Farms Program seeded the prairie in 2016 and 2017 and mowed it last year and this year.

“Sometimes it’s hard to wrap your head around this prairie stuff,” said Laura Jackson, director of the Tallgrass Prairie Center. “With corn and soybeans, you think in terms of bushel per acre. With prairie we are packing as many different kinds of plants in here as we can. It’s more like planting an orchard. It takes three to five years.”

Landowners have enrolled prairie strips in continuous CRP using a variety of practice codes, said Youngquist. Funding for new projects is on hold until a new farm bill is funded. There is cost share for prairie strips through both NRCS and CRP. NRCS EQIP and CSP funding have been used. There’s also funding for seed through the DNR/Pheasants Forever’s Prairie Partners Program, funding through Trees Forever, and other similar groups.

In addition to the prairie, Roadman Farms established a saturated buffer that takes tile water coming off a 60-acre crop field and diverts a portion into lateral drainage tile installed along a buffer of growing plants and tree roots. Plants take up nitrate from the tile water and microbes convert nitrate to nitrogen gas.

Kent Heikens, with USDA/ARS, said at this site, about 80 percent of the nitrate from the field tile was diverted into the buffer and almost all (98 percent) of this nitrate was removed in the saturated buffer.

“We want to help with a lot of tools in the tool box to improve water quality,” Heikens said.

Other conservation practices on the Roadman land, which is operated by Dudden Farms, consist of a riparian buffer, grassed waterways, no-till, cover crops, and the entire farm is pattern tiled.

“You can’t make decisions like this in a silo or a box,” he said.