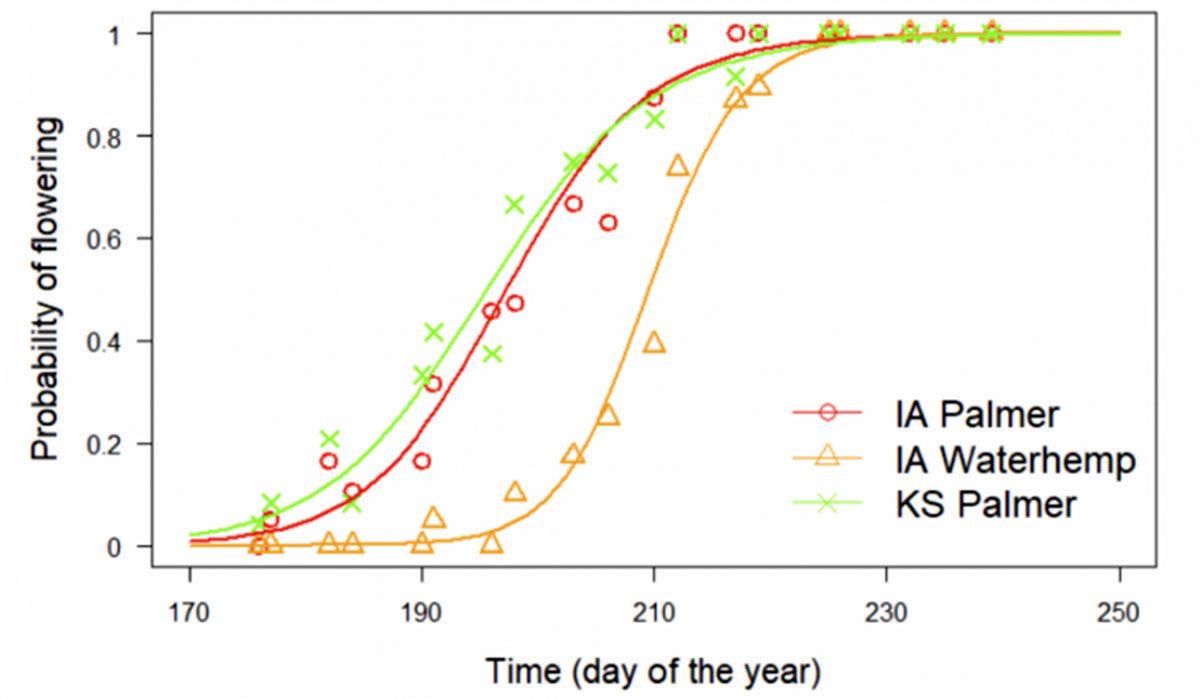 Time to flowering of Palmer amaranth and waterhemp in central Iowa (2019-20). 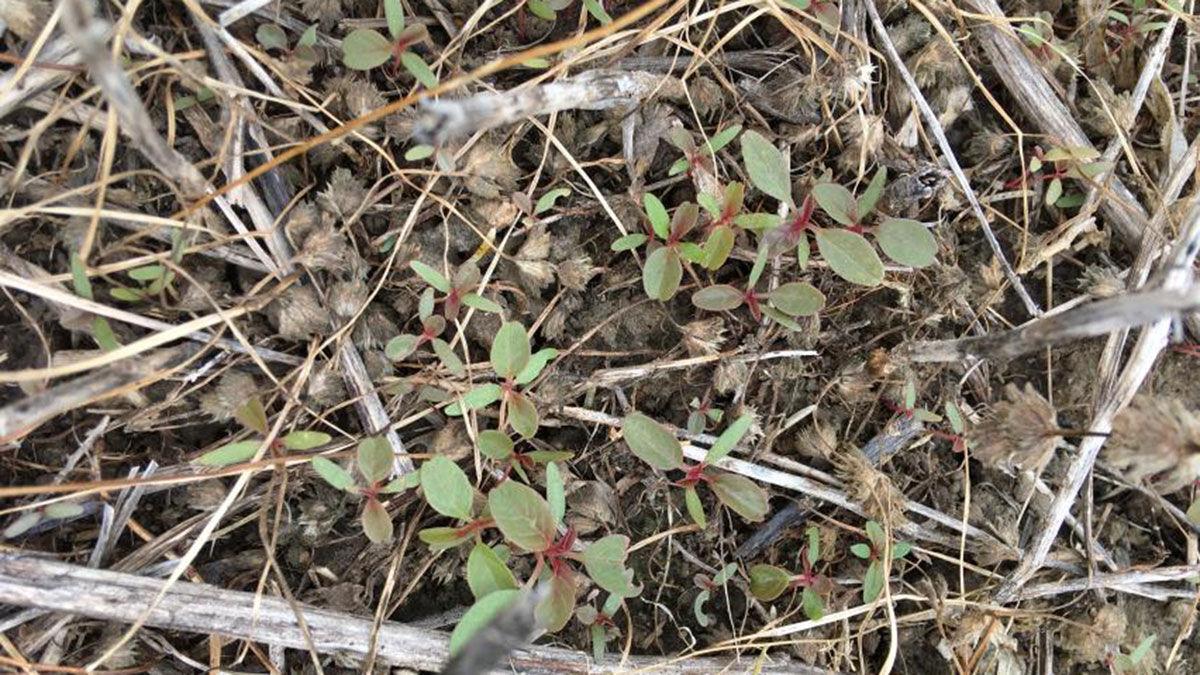 Palmer amaranth seedlings in a no-till field in Pottawattamie County May 30. Similarity in appearance to waterhemp seedlings complicates detecting new infestations in the spring. 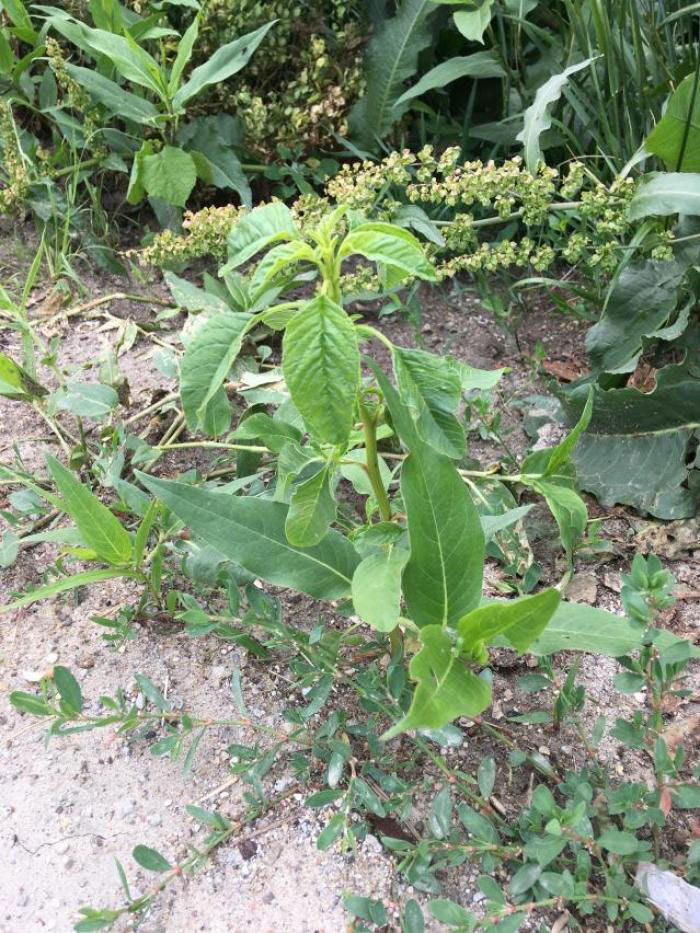 Palmer amaranth on roadside in Mills County May 30. This infestation is believed to have started from seed falling from trucks hauling grain to a nearby soybean processing plant.

The first “official” finding of Palmer amaranth in Iowa was August 2013 in Harrison County. Shortly thereafter the weed was identified in Muscatine, Fremont and Page counties.

These infestations were likely due to Palmer amaranth seed being transported on equipment/trucks involved in crop production.

A few new Palmer amaranth infestations have been reported each year since the big influx in 2016. A variety of vectors for the seed are suspected, including purchase of used farm equipment from states with established Palmer amaranth, import of cotton seed for dairy operations, and grain transport. Continued vigilance is needed to identify new infestations when they first appear.

Since 2014 I have followed the three original infestations in western Iowa. On a positive note, the size of the infestations has declined at all sites since they were first reported, and I haven’t seen evidence that Palmer amaranth has spread to adjacent fields. On the negative side, two of the three infestations were small enough that they should have been easy to eradicate, but steps to achieve this haven’t been adopted.

Also on the bad side, since starting these tours I’ve found two new sites to visit. I visited these sites over Memorial Day weekend, and Palmer amaranth was easily found at three of the five sites.

What does the future hold for Palmer amaranth in Iowa? The failure of the weed to rapidly spread from the initial introductions should not lead to complacency.

Weeds typically undergo a lag phase of approximately 20 years when introduced to a new region. During the lag phase the weed spreads at a relatively low rate, but evolves to be better adapted to local conditions.

Another factor limiting the current spread of Palmer amaranth is that most crop fields are treated with herbicide programs designed to control waterhemp, making it difficult for Palmer amaranth to invade fields. Waterhemp thrives in spite of these programs due to its large, established seed bank, something Palmer amaranth lacks at this time.

Palmer amaranth seed was more persistent than waterhemp when buried within the upper half inch of soil, but persistence of the two species was similar at a 6-inch soil depth.

The prolonged emergence and persistence of Palmer amaranth seed suggest that Palmer amaranth will pose a management challenge similar to waterhemp if allowed to become established.

Palmer amaranth has not lived up to the hype presented upon its arrival in Iowa. However, Palmer amaranth will undoubtedly adapt to our climate, and therefore will pose a larger challenge than it currently does. While it is unlikely to be eradicated, early detection and rapid response should make it relatively easy to prevent new detections from becoming permanently established in fields.

At nearly any field day, there is likely to be a presentation on the benefits of abandoning conventional tillage.

A devastating pest has found its way into the region this fall, and fields left untreated may have seen damage already.

Farmers look for any edge when it comes to weed management. While issues in crop fields are heavily discussed, managing prairie land can be ju…

AMES, Iowa — Iowa is a major producer of grain, meat, dairy, eggs and other major agricultural commodities. The state’s agriculture has also b…

The derecho left many Iowa farmers with significant volunteer corn this growing season, and unfortunately some may be facing a similar situation for 2022 after late August storms flattened fields.

As the 2021 growing season comes to a close, what should you be thinking about in terms of corn disease and how that might impact your harvest plans?

Time to flowering of Palmer amaranth and waterhemp in central Iowa (2019-20).

Palmer amaranth seedlings in a no-till field in Pottawattamie County May 30. Similarity in appearance to waterhemp seedlings complicates detecting new infestations in the spring.

Palmer amaranth on roadside in Mills County May 30. This infestation is believed to have started from seed falling from trucks hauling grain to a nearby soybean processing plant.