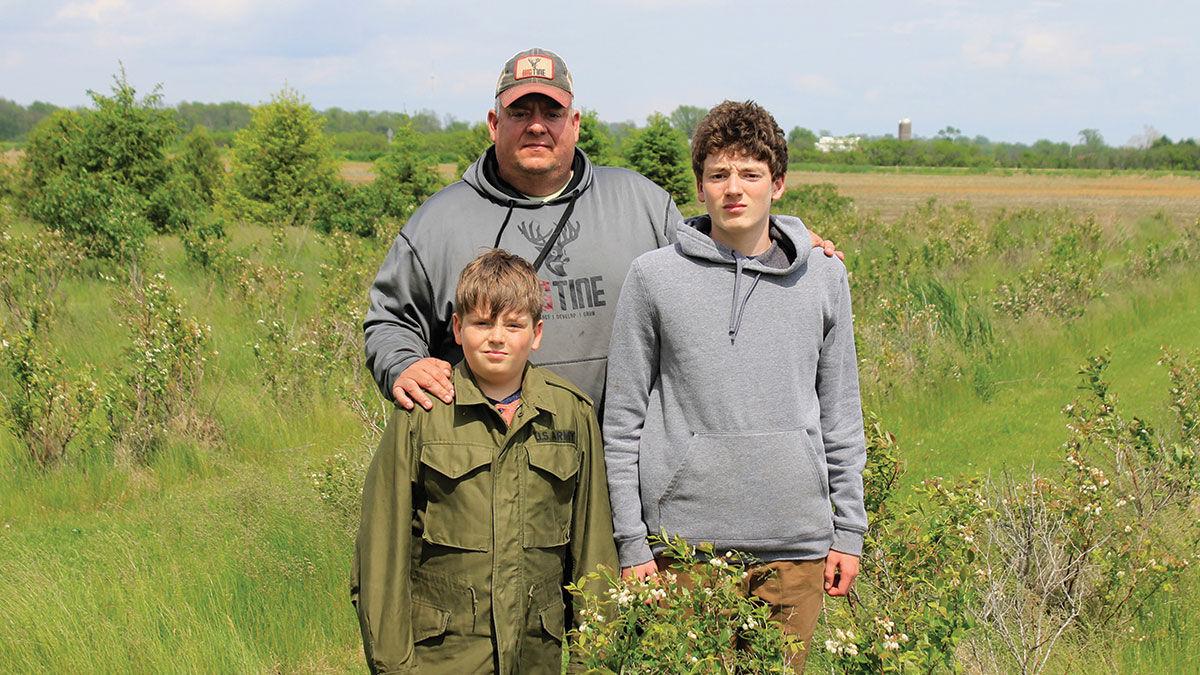 Jason Kerr enlisted in the Army after the attacks on Sept. 11 and served in Iraq.  Following his discharge, he set another challenge for himself: growing blueberries in Iowa with his sons, A.J. and C.J. 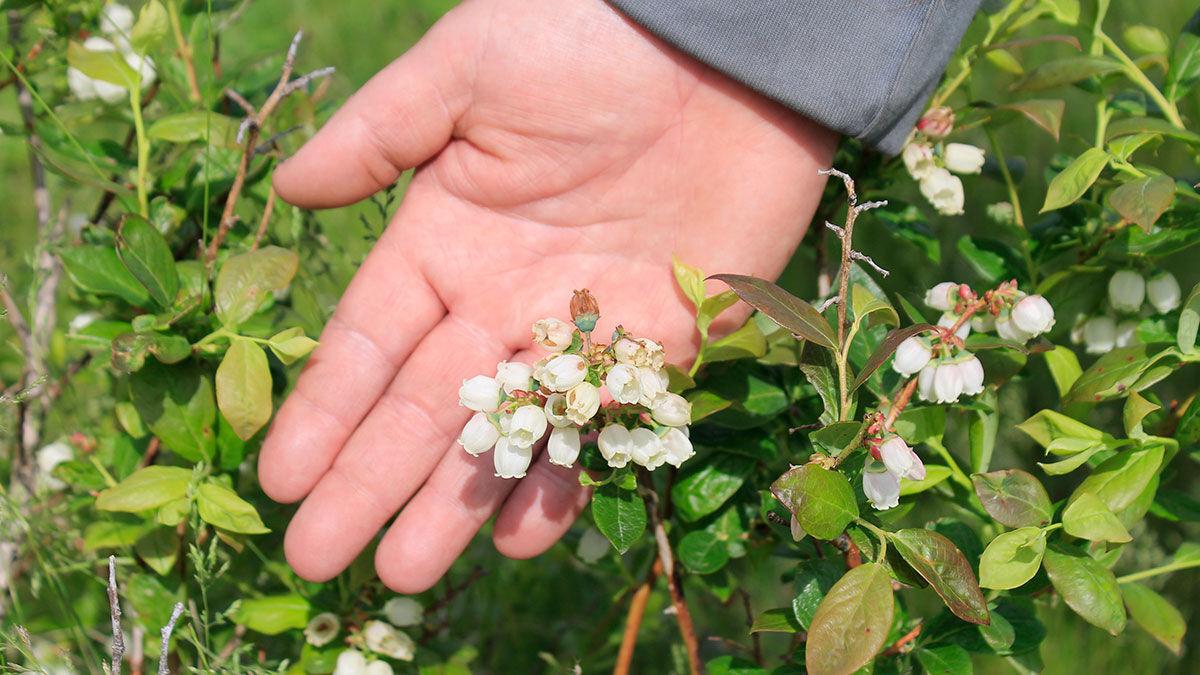 Kerr said his key for growing blueberries is to treat each row as its own field.

DeWITT, Iowa — Jason Kerr was serving breakfast as a hotel manager in Davenport, Iowa, when the world seemed to stand still.

All the news programs in the hotel lobby quickly shifted tone as reports of a plane flying into the World Trade Center came in. Kerr, 29 years old at the time, knew he didn’t have a choice in what to do next.

“I always had service on the back of my mind, but after Sept. 11, all that went away and it was just ‘how fast can I get over there,’” Kerr said. “It’s probably akin to what I’m sure many men and women felt after Pearl Harbor.”

Kerr had considered going on an officer path when he was in college. His family has a military history, with his grandfather, great uncle, father and uncle all spending time in the armed forces.

He remembers when he first told people he was joining the Army.

LeClaire and had a fire pit going,” Kerr said. “Neither one of us had more than two words to say. He just said, ‘I’m joining the Army.’ I said, ‘Yeah, me too.’ I had to say it out loud.”

Enlisting in the Army Reserves, Kerr was older than many of the new recruits. He felt the need to prove himself. He ended up being top of his class.

Kerr served as a .50 caliber machine gunner on a Humvee in Iraq, the same gun system used by his grandfather and great uncle during their service.

Now, after hearing the stories of his father’s service, Kerr’s 10-year-old son A.J. has dreams of joining the Air Force.

“I want to follow in those footsteps,” A.J. said. “I’m not sure what I want to do in the Air Force yet, but I just know I want to join and I feel proud (of my dad).”

Following his discharge, Kerr felt he needed to keep serving. He worked as a Veteran’s Representative for the state of Iowa, helping veterans overcome barriers for employment. However, he felt he was running into personal roadblocks. He needed to get back to his own roots.

Jason grew up in Pleasant Valley, Iowa, where his family had a truck farm, growing onions primarily and other vegetables such as peppers and tomatoes and pick-your-own strawberries.

That connection to the land was important to him, particularly after he came back from serving in Iraq.

“I was a hotel manager, and I was making good money, but I went back to my old summer job I had back in college and cut grass out at Scott County Park and loved it,” Jason said. “I just loved it. You can talk about a pay cut, but it wasn’t about the money.”

Finding that kind of therapeutic outlet helped Kerr decide he needed to stay on the land. He purchased a farm in 2011, and growing blueberries has helped him achieve some of the fulfillment he felt was missing in his life.

“The blueberries have helped me in a lot of ways,” Kerr said. “It’s given me something productive for my mind to focus on, even to obsess about in a good way. If you are looking forward to the next day and for the sun to come up the next day, I needed that pretty bad.”

He said settling on blueberries as his primary crop was like setting a challenge for himself.

“There’s real neutral soil around here and anyone can grow a strawberry, to be honest with you,” Kerr said. “I thought about doing something more current, more of a super food, and then someone told me I couldn’t grow blueberries. That’s exactly the moment I knew that’s what we were going to do.”

Kerr said his key for growing blueberries is to treat each row as its own field, treating or adding whatever nutrients are needed for that specific area instead of a blanket application. He said when starting a new crop, things will go wrong.

“I’ve honestly made every mistake there is to make,” he said. “Not understanding the right time to do things and figuring it out, it really has worked from the beginning, but it’s gotten better once we made the mistakes and learned lessons.”

Lessons are a key part of Kerr’s philosophy, particularly when it comes to his sons C.J. and A.J.

Jason has had both his sons involved in the blueberry operation, with goals of teaching them the value of a dollar and learning just how much certain things are worth. By giving his children an avenue to earn their money, it helps them better appreciate just what they have, Kerr said.

C.J. has taken on some of the marketing for the blueberry business at 17 years old, handling much of their farmers market operations. They said the farmers market is more of a marketing opportunity for them, as they enjoy the pick-your-own method of harvesting.

C.J., however, has worked with a friend at the farmer’s market to add value to the crop. He is interested in learning more about what baked goods can be made using their blueberries and selling them alongside the blueberry crop. He said he is considering going to college to learn more about baking.

He also takes his father’s lessons to heart.

“I want to do something new, only I don’t want to grow blueberries,” C.J. said. “I’ve always wanted to live out west and find something that’s hard to grow out there. It would be cool to go live out there and have a pumpkin patch or something you don’t see much out there.”

His father was proud of the way his boys spoke of their future plans. Kerr said he is always looking to positively influence the people around him. When someone needs him, he is looking to help.

It’s a motto he has carried with him since his time with the Boy Scouts.

“Always leave an area better than when you found it. Whether that’s your picnic area, your farm or your country, that’s how we look at it,” he said.

Jason Kerr enlisted in the Army after the attacks on Sept. 11 and served in Iraq.  Following his discharge, he set another challenge for himself: growing blueberries in Iowa with his sons, A.J. and C.J.

Kerr said his key for growing blueberries is to treat each row as its own field.