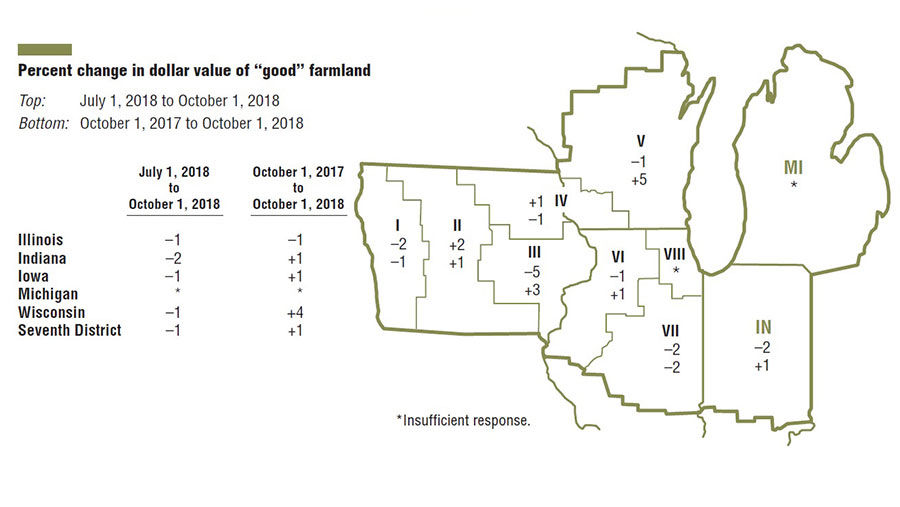 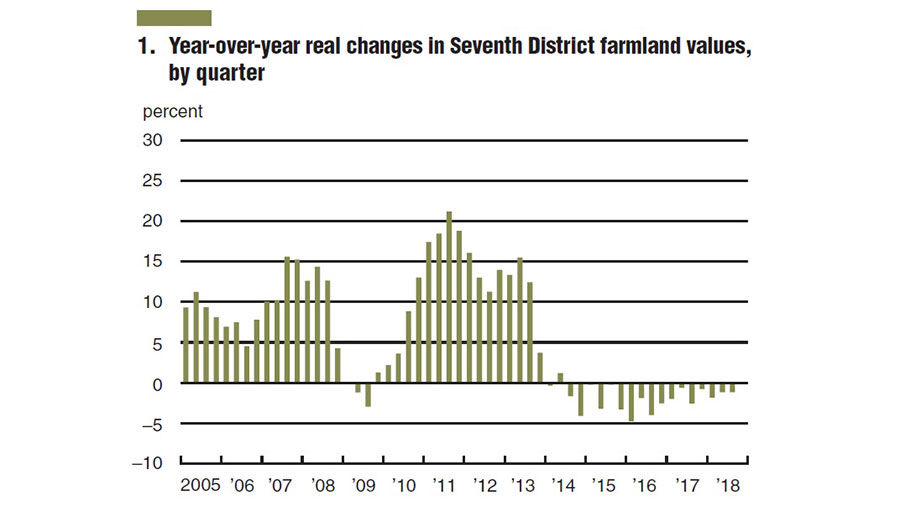 Editor’s note: The following was written by David B. Oppedahl, Fedaral Reserve Bank of Chicago senior business economist, for the bank’s November 2018 AgLetter.

In the third quarter of 2018, farmland values for the Seventh Federal Reserve District were up 1 percent from a year ago.

However, according to the 188 agricultural bankers who responded to the Oct. 1 survey, district farmland values were 1 percent lower in the third quarter of 2018 than in the second quarter. This was the first quarterly decline for district agricultural land values since the fourth quarter of 2016 (nearly two years ago).

These results helped explain how the average loan-to-deposit ratio for the district established a new record of 79.4 percent. Moreover, repayment rates for non-real-estate farm loans were lower in the third quarter of 2018 relative to the same quarter last year, and loan renewals and extensions were higher.

Agricultural land values would have experienced more downward pressure in the absence of exceptional crop yields. In 2018, district-wide corn and soybean yields jumped to all-time highs (198 bushels per acre for corn and 59 bu./acre for soybeans).

The USDA expected the country’s corn harvest in 2018 to be the second largest on record; moreover, the national soybean harvest was forecasted to set another record.

For the third quarter of 2018, corn prices were 1.9 percent higher than a year ago, based on USDA data. But soybean prices were 5.6 percent lower than a year earlier. Accounting for larger supplies of crops and trade tensions, the USDA revised its price estimates for the 2018-19 crop year to a range of $3.20 to $4 per bushel for corn and a range of $7.60 to $9.60 per bushel for soybeans.

When calculated with the midpoints of these price intervals, the projected revenues from the 2018 district corn and soybean harvests would be up 8.8 percent and 0.1 percent from 2017, respectively.

Hence, livestock operations — particularly dairies — faced some challenges, according to several survey respondents. For instance, one Michigan agricultural banker reported that “dairy enterprises have been hard hit by milk prices.”

Still, on the whole, respondents expected an uptick in transfers of available properties for sale. Twenty-six percent of the responding bankers forecasted an increase in the volume of farmland transfers relative to the fall and winter of a year ago, and 21 percent forecasted a decrease.

According to the responding bankers, hog, cattle and dairy farmers were yet again expected to encounter diminished net cash earnings over the fall and winter relative to a year ago. Just 3 percent of the survey respondents predicted higher net earnings for hog and cattle operations over the next three to six months relative to a year earlier, while 65 percent predicted lower net earnings.

Additionally, survey respondents expected loan repayment rates to decline this fall and winter from a year ago; only 2 percent of the responding bankers forecasted a higher volume of farm loan repayments over the next three to six months compared with a year earlier, while 57 percent forecasted a lower volume.

Moreover, forced sales or liquidations of farm assets owned by financially distressed farmers were anticipated to increase in the next three to six months relative to a year ago, according to 61 percent of the responding bankers (only 1 percent anticipated a decrease).

District non-real-estate farm loan volume in the October through December period of 2018 was expected to be higher compared with the same period of 2017, mainly because of increases in the volumes of operating loans and loans guaranteed by the Farm Service Agency of the USDA.

An Iowa respondent emphasized the “concern from row crop farmers regarding interest rate increases next year and low commodity prices.” This concern was echoed by livestock operators. So, there was a decidedly downcast outlook for agriculture based on the latest survey responses.