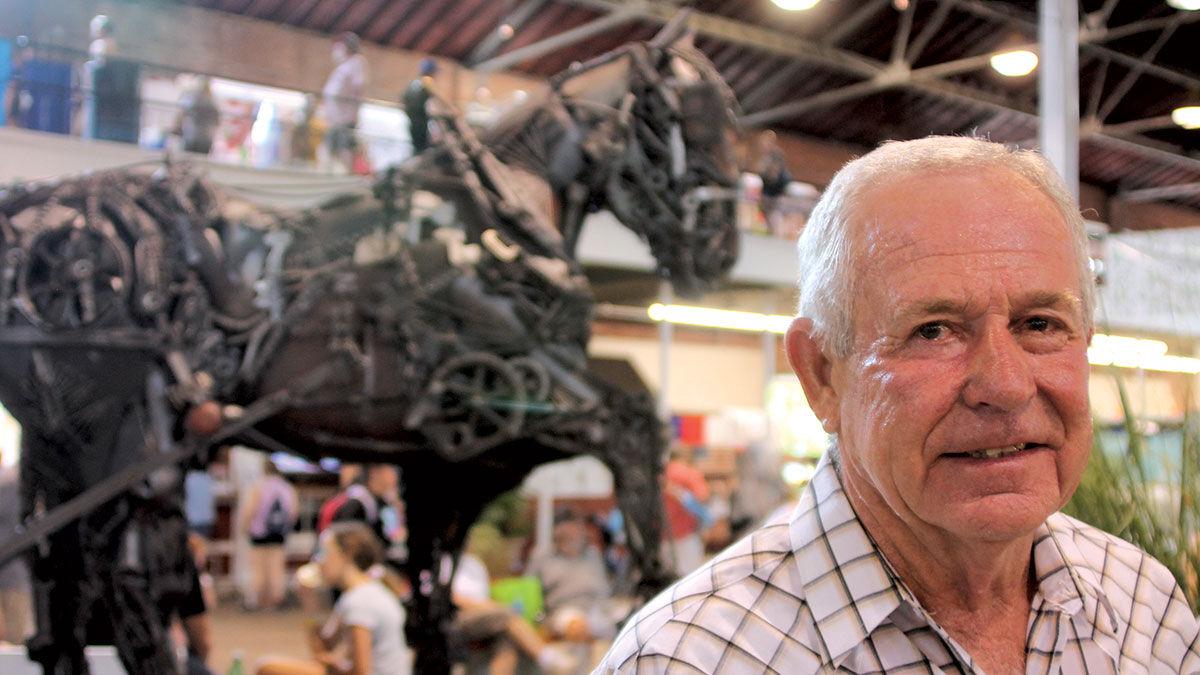 Dwight Hughes Jr. worked with an artist to have a sculpture of a Percheron horse made and displayed at the state fair. The horse was made of welded-together metal machine parts. 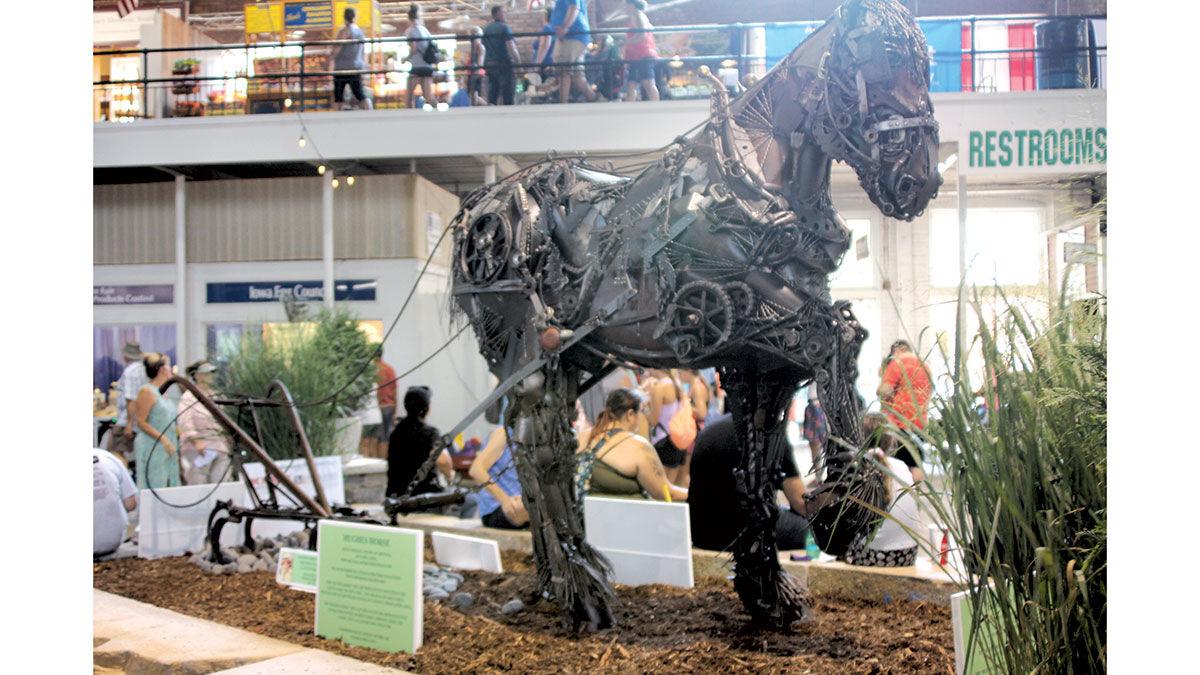 The metal Percheron pulling a plow sculpture on display at the Iowa State Fair.

DES MOINES, Iowa — The horse on display at the Iowa State Fair was unlike any other.

Of course, it isn’t really a Percheron. It’s a metal montage of parts and pieces and contraptions welded together into a sculpture of a Percheron. But it is modeled after a real draft horse. And it does have a job to do.

The horse sculpture was the brainchild of Hughes, who has been involved in his family’s nursery and landscaping business all his life. That business was always located on farmland at the edge of Cedar Rapids, where the family farmed and ran the business and also raised Percherons as a hobby. But as Cedar Rapids grew, the family eventually realized that after five generations and more than a hundred years at that location, it was time to move away from the city.

Hughes dreamed of creating something that would be of use and would commemorate the farm heritage. That idea led to a seven-acre park in what has become a residential area on Wilson Avenue. And the park, in turn, led to the idea for the sculpture, or metalscape.

During a warm day at the Iowa State Fair, Hughes sits and watches people parade past the horse sculpture that is on display, a metal Percheron pulling a plow.

And he talked about how, the day after the fair would end, the horse would be mounted and displayed at the new park in Cedar Rapids.

Of course, Hughes didn’t make the sculpture himself. He got the idea for it about six years ago when he saw a metal sculpture made by Ottumwa artist Steve Huffman. He approached Huffman and the two came up with the idea for this horse, the Hughes Horse.

“Art has always been a part of my life,” Huffman says. “As a kid in junior high I would make things and sell them.”

For most of his life he made a living in the building trades, but art was always a hobby. As he got older it became a more than that. And when Hughes approached him with the idea for this sculpture, he couldn’t resist.

Pictures and measurements of a real Percheron were taken. Huffman began collecting metal parts and pieces that he thought might fit in the sculpture.

He took a wire brush to them and cleaned them before figuring out how to weld them all together into a coherent piece of art.

The critic might say that the end result is in a way a statement about agriculture, about the movement from horse to metal power. Whatever the case, it is a testament to farming and to art.

"I never expected to be a physician living and working through a pandemic where we're learning and treating a new infectious disease,” Dr. Rya…

Forty years ago there was a farm crisis. Twenty years ago was 9/11. In the past year a pandemic hit the country and the world. Through it all,…

The sight of smoke billowing out of those towers against a blue September sky is something most Americans will never forget. It was a horrific…

From inch-thick pork chops to ghost pepper beef sticks, Iowans are hungry for specialty meats they can’t buy at most grocery stores.

From fertilizers that help farmers produce more to enhancing what nutrients a plant produces, there are many ways even consumers can see agric…

It’s early, but discussions about the next farm bill will likely be starting up in the next few months as agricultural organizations begin tal…

Dwight Hughes Jr. worked with an artist to have a sculpture of a Percheron horse made and displayed at the state fair. The horse was made of welded-together metal machine parts.

The metal Percheron pulling a plow sculpture on display at the Iowa State Fair.