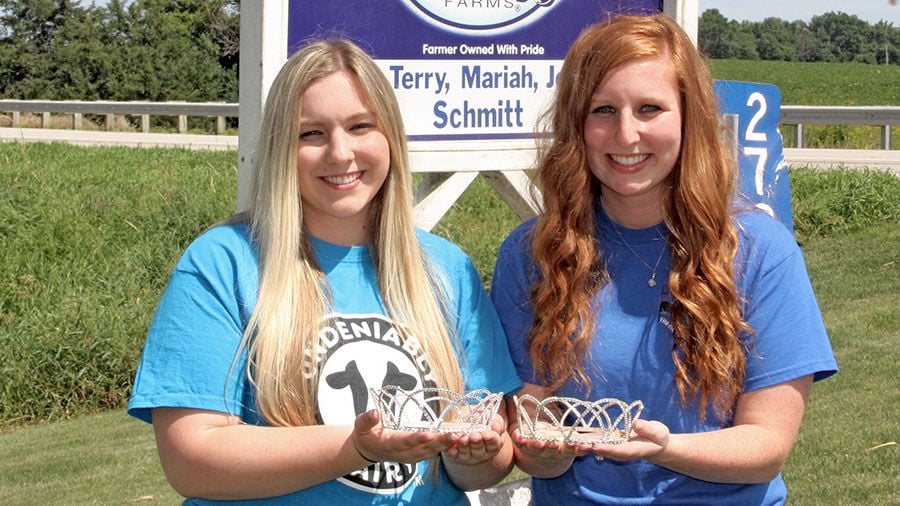 Sisters Jessica and Mariah Schmitt share the experience of being Iowa Dairy Princess, Jessica in 2018-19 and Mariah in 2013-14. Their parents Terry and Carl operate the family dairy farm by Fort Atkinson, Iowa. 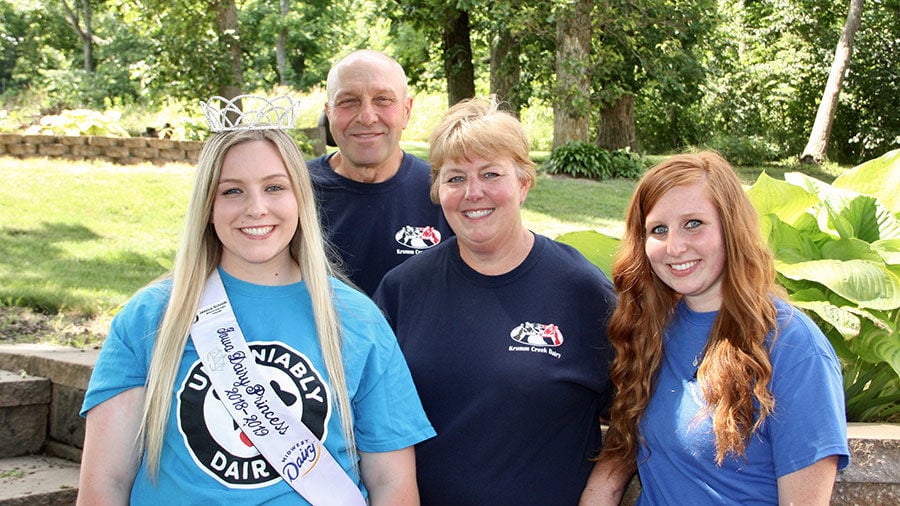 Terry and Carl Schmitt operate the family dairy farm by Fort Atkinson, Iowa. The sisters are the fourth generation on the farm and work daily with the operation.

“Someone asked me how is it that I have two daughters and they both got Iowa Dairy Princess,” said Terry, Jessica and Mariah's mom. “I said because they have the passion for the dairy industry.”

At last year's coronation, it was more nerve wracking for Mariah than it was for Jessica.

“I knew how bad Jessica wanted to win,” Mariah said. “I watched Jessica put so much time and effort into this. To see her succeed was really exciting. I had such a good experience as Iowa Dairy Princess, and I wanted those opportunities for her.”

Jessica graduated from Turkey Valley High School in 2018 and will be a sophomore at Iowa State University where she is majoring in dairy science and ag communications. She is thinking about a career in dairy product marketing or communicating with consumers.

She is a Dairy Science Club officer, a College of Agriculture and Life Sciences ambassador, an animal science peer mentor and on the Dean's List.

Mariah, who double majored in dairy science and agriculture and society at ISU, is coordinator of Iowa's Dairy Center at Northeast Iowa Community College in Calmar.

“Being dairy princess gave me clarity in what I wanted to do in my career,” Mariah said. “A big part of my job is working with consumers and sharing that dairy message through our tourism. We'll have 10,000 visitors every year to Iowa's Dairy Center.

“Being Iowa dairy princess, I learned how to communicate with consumers, to share our story and answer questions. Going to all the events as Iowa Dairy Princess, I had no idea those would be the same questions I'd be answering five years later in my position.”

Their parents, Terry and Carl, milk 50 Holsteins. Terry also works at Opportunity Homes in Decorah. The sisters are the fourth generation on the farm and work daily with the operation. Mariah still owns a Guernsey from her showing days. Jessica has seven head including Brown Swiss, Ayrshire and Milking Shorthorn.

It was hard being Iowa Dairy Princess during a year when milk prices were low and producers were struggling, Jessica said.

“But the conversations with our consumers have been a lot better. It made them want to reach into dairy and figure out more of the facts and what's actually going on dairy farms,” she said. “They wanted to know how they can help the dairy industry.”

There have been more open houses on dairy farms this summer.

“Dairy farms are opening their doors to consumers to try to promote their product,” she said.

Jessica has seen a lot of support on social media for dairy farmers, with many informal competitions where individuals and groups challenge each other to donate dairy products to food banks.

The annual Iowa Dairy Princess communications workshop and princess orientation was at the Northeast Iowa Food Bank in Waterloo in June. Participants learned about the food bank, volunteered and presented a $700 donation from dairy farm families for milk and other dairy products. The donation was part of the Milk Monday program.

This winter's incessant snow made attending dairy banquets a challenge, but the weather never held Jessica back. One weekend, she and Terry got home from a banquet at midnight and she left right away for Ames. She got back to ISU at 3 a.m. A snowstorm started at 5 a.m.

“It was pretty exciting that I was on the Governor's Facebook page,” she said.

The year Mariah was dairy princess was the first year the Iowa Dairy Princess program had a Facebook page.

With 1,129 page likes, Jessica's platform is much bigger, Mariah said.

Jessica and alternate princess Grace Howe write a post for each event they attend.

“When you attend three events in a weekend, it gets pretty busy making a post about each one,” Jessica said. “But I know each of those farms is waiting for us to make a post about their event so they can share it.”

Another family connection for this year's state dairy royalty is alternate princess Grace Howe's mother Shelly (Fossum) Howe, who was also alternate princess in 1988-89. Howe is from Waukon and represented the Iowa Jersey Cattle Club.

The 2019-20 dairy princess and alternate will be crowned Aug. 7 at the Iowa State Fairgrounds in Des Moines. During this year's state fair, Jessica and Grace will be busy passing out ribbons and talking to consumers. They complete their duties at the end of the fair.

Julie Hammerand, an 18-year-old from Sherrill, Iowa, was crowned the 66th Iowa Dairy Princess at the Iowa State Fairgrounds in Des Moines. Ham…