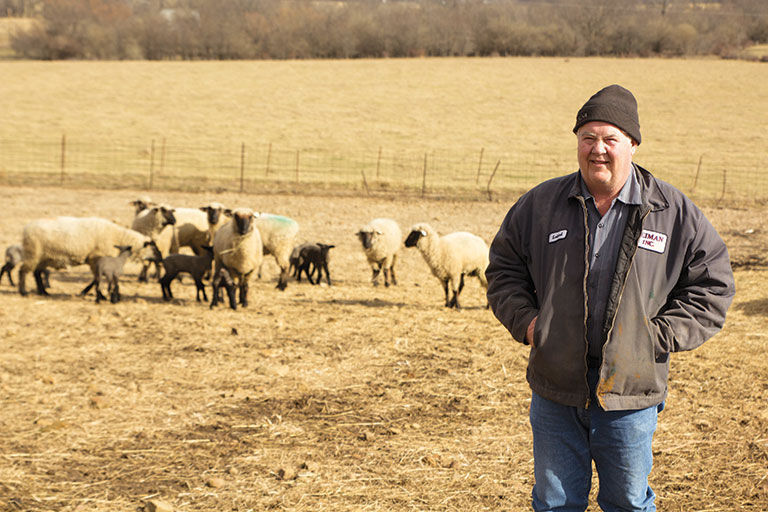 Bates County, Mo., farmer Leland Browning keeps records of each breeding so he knows when to expect each of his Hampshire ewes to lamb. 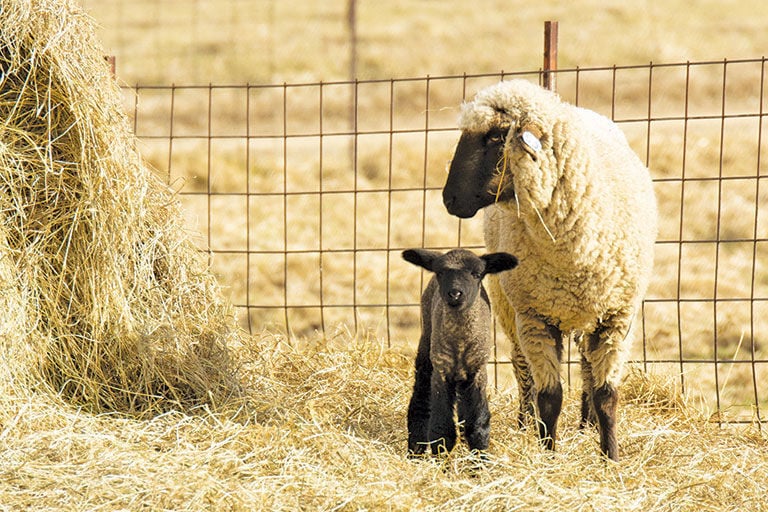 For Hampshire breeder Leland Browning, it starts the day he turns rams out on his Bates County, Mo., farm. His rams wear a marking harness, making it easy to tell when they breed a ewe.

Browning keeps records of each breeding so he knows when to expect each ewe to lamb. This allows him to manage their diet better and know when to put them in the lambing jug.

To support this growth curve, ewes need more protein and energy in their diet.

“In general, we try to feed more grain in late gestation. Maybe one to two pounds of grain each day depending on the quality of hay,” Morrical said. He recommends feeding high-quality legume hay with corn or a 12 to 14 percent corn and soybean meal mix.

“You’re building strength in that lamb the last 50 days. The healthier the ewe, the stronger the lamb and the better the colostrum,” he said. “You cannot starve a profit out of an animal,” Browning said.

Two-thirds of a lamb’s growth occurs in the last trimester.

“Half of that two-thirds comes in the last one-third of that trimester,” he said.

Rations should also include vitamin E, selenium and iodine. This increases vitamin E in the milk while selenium improves immune function. Iodine helps with thermal regulation.

“If you’re seeing a lot of hypothermia cases or still births, it could be a shortage of iodine,” Morrical said.

He warns producers against overfeeding after lambing though.

“If a ewe is thin, giving her extra corn in the lambing jug to improve milk can create acidosis. In reality, ewes don’t need any grain the first day in the jug,” he said.

Her requirements go down, and she only needs about a half pound each day to stimulate rumen microbes.

Preparing the ewe goes beyond nutrition though.

Morrical said producers should shear ewes six weeks before lambing. With wool or hair removed, birth and nursing are easier for the newborn. It also makes the ewe want to stay in a warm, bedded area — the ideal spot for lambing.

“The colder and muddier the weather, the better it works,” Browning said.

Once ewes are prepped for lambing, producers should keep a close eye on them.

“A ewe will walk around and look like she doesn’t care, and an hour later you have lambs born and nursing,” Browning said.

But if the lambs don’t jump up right away, problems arise.

“They’re born with no desire to live,” he said.

After birth, he uses a method called “stirring” to keep them active and nursing. “After they’re born, they stand in the jugs for two to three days depending on the weather. I like to get them and their mothers up every four to five hours,” he said. Making the lamb get up and move encourages it to nurse. This helps ensure it gets colostrum and plenty of milk from the start.

“You either have to be with them or make sure the lambs are strong enough so if you aren’t there, they have a chance,” he said.

If lambing occurs in the spring, pastures offer a good habitat. It’s less labor intensive and eliminates the need for a barn and pens. But it requires good management. Predators and parasites can create problems. Morrical said good fences and guard dogs are a necessity.

Controlling parasites means producers have to manage their grass. A good method is rotating lambing pastures with hay fields each year.

Winter lambing requires more preparation and monitoring, but producers have more control of the situation.

“In confinement, you can shear the ewes ahead of time, and lambs have a better chance of survival. But you have to juggle the space better,” Morrical said.

Ewes and newborn lambs should be in a jug for 24 to 72 hours after birth for bonding.

“The more (lambs) she has, the longer she stays,” he said.

“If we get too tight, the bedding gets wet faster, and the air quality is poor. It increases the chance for scours, respiratory disease and pneumonia,” he said.

Tight spaces can lead to physical injury too.

Recording death loss will help producers identify management or nutrition problems. The goal from birth to weaning should be less than 10 percent.

“It’s no fun keeping track of dead lambs, but you can’t manage what you don’t measure,” he said.

Bates County, Mo., farmer Leland Browning keeps records of each breeding so he knows when to expect each of his Hampshire ewes to lamb.