Rich Reinert has a part in the Buffalo Bill Rodeo that fans never see.

The North Platte man makes the rodeo run smoother, and the fans don’t even notice it.

Because it is loud in front of the arena, Reinert uses a set of flip cards, each numbered, to indicate to Corley, so Corley can announce to the crowd which cowboy will be riding next, out of which chute.

In his former career, he was stepping in front of the bulls, instead of behind the chutes.

He worked as a bullfighter, first for regional rodeos, then in the PRCA. He worked from coast to coast, at rodeos across the nation, often traveling with rodeo clown Butch Lehmkuhler.

Born in 1949 and raised on a ranch near Johnstown, Nebraska, he admired a bullfighter from a neighboring town, asking him if he could help.

“I bugged him, till he finally relented,” Reinert said, recalling the rodeo in Harrison, Nebraska, in 1969, in the mud.

He worked as a bullfighter at the Buffalo Bill Rodeo one year, but is very proud of his streak of 28 years of working the Cody, Wyoming Rodeo, held over July 4. He retired from bullfighting in 2009.

Along with his rodeo career, Reinert taught school. He started as a high school math teacher, doing that for nine years, then switched to elementary P.E. for 25 years, and then spent six more years as the athletic director, all at North Platte Public Schools.

He got started volunteering with the Buffalo Bill Rodeo in conversation with Hadley Barrett, now deceased, and Randy Corley, co-announcers of the rodeo.

“For a while it was a lot of yelling” up to the announcer’s stand, Reinert said, until they devised the numbered flip cards.

Reinert was in the arena, so that Barrett, who was on horseback, could see him, as well as Corley, who was in the announcer’s stand. There were sometimes problems, Reinert said.

Barrett passed away in 2018, and now Reinert does his work from the catwalk behind the chutes, instead of in the arena, which is safer.

“I’m more visible to Randy, in that respect,” he said. “And I don’t have to be worried about getting run over by a horse or a bull, but I might get run over by (stock contractor) Bennie Beutler.”

Reinert volunteers at other activities, too. He helps at the state high school track meet as a clerk of the start, volunteers at the hospital, and helps out with sporting events at the North Platte High School, when needed. He works part time at the golf course, too: “I try to stay busy.”

He is a 28-year survivor of non-Hodgkin’s lymphoma, and has been married 51 years to his wife Chris. They have two daughters: Amanda Reinert, who teaches in Kearney, and Andrea Hayes, married to Ryan Hayes. Andrea and Ryan have two children: a daughter, Ashyln, and a son, Logan.

Reinert takes great pride in the Buffalo Bill Rodeo and its quality.

“It’s pride in what the community offers,” he said. “If there’s something I can do to help make it better, then I’m in.”

He loves seeing old faces and friends when the rodeo comes around every June, and loves being part of it.

“I pitch in and help wherever I can, and stay out of the way the rest of the time.

“Rodeo is a different life and I’m fortunate that I got to be a part of it, and still am. I’ll keep doing what I’m doing, as long as they want me.”

This year’s rodeo will be held June 16-19 at the Wild West Arena in North Platte. It begins at 8 p.m. each night and tickets can be purchased online at NebraskalandDays.com, at the NebraskalandDays office (2801 Charlie Evans Drive, North Platte); and at the gate. For more information, visit the website or call the office at 308-532-7939. 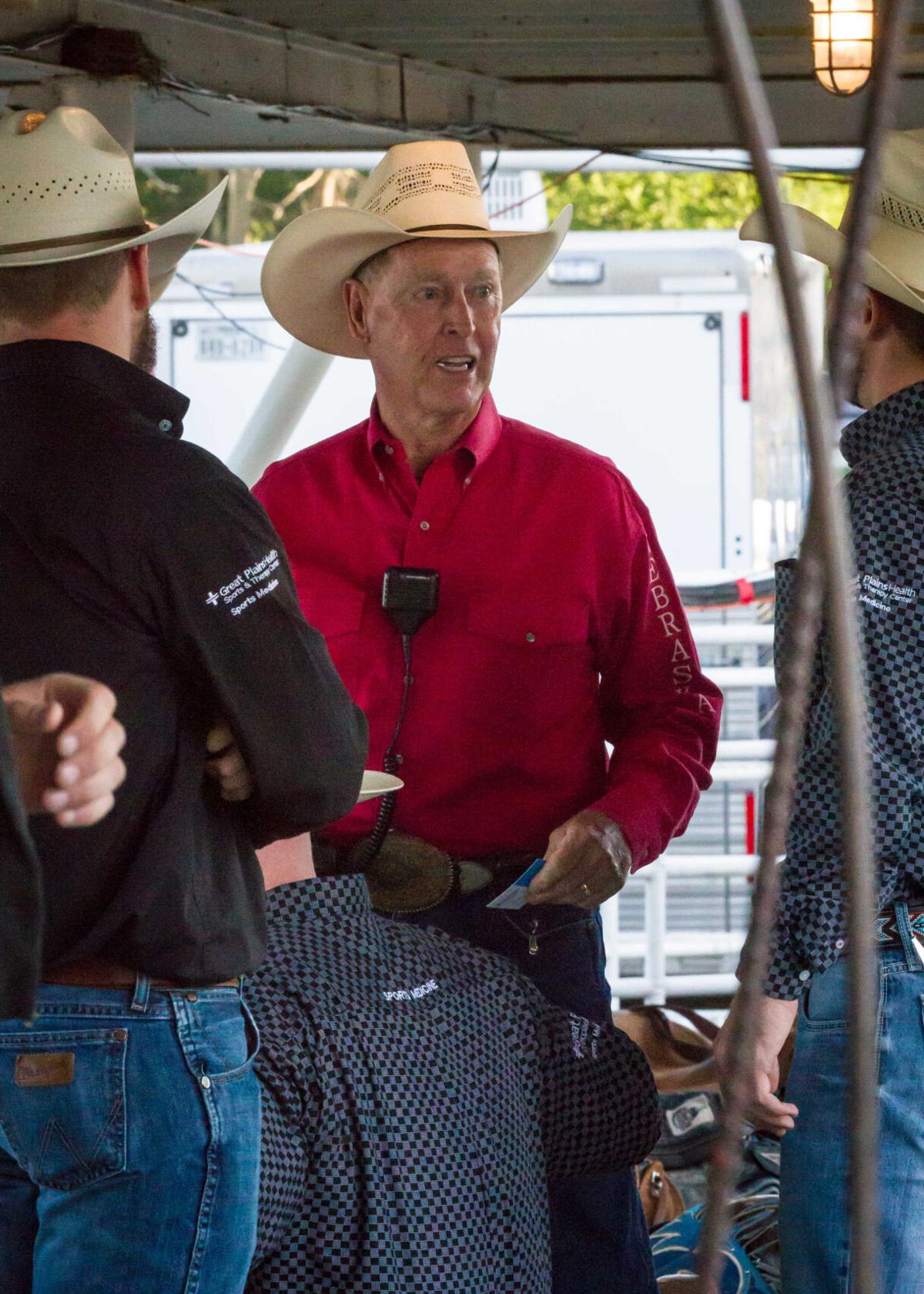 Rich Reinert, a former rodeo bullfighter, volunteers his time at the Buffalo Bill Rodeo. A former educator, he loves helping with the show, making sure it runs smoothly. The Reinert family: Rich and Chris, and their daughters Amanda Reinert and Andrea and Ryan Hayes, plus grandchildren Ashyln and Logan, share a family moment. Rich volunteers at the Buffalo Bill Rodeo in North Platte.