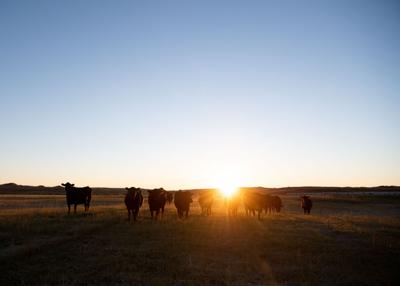 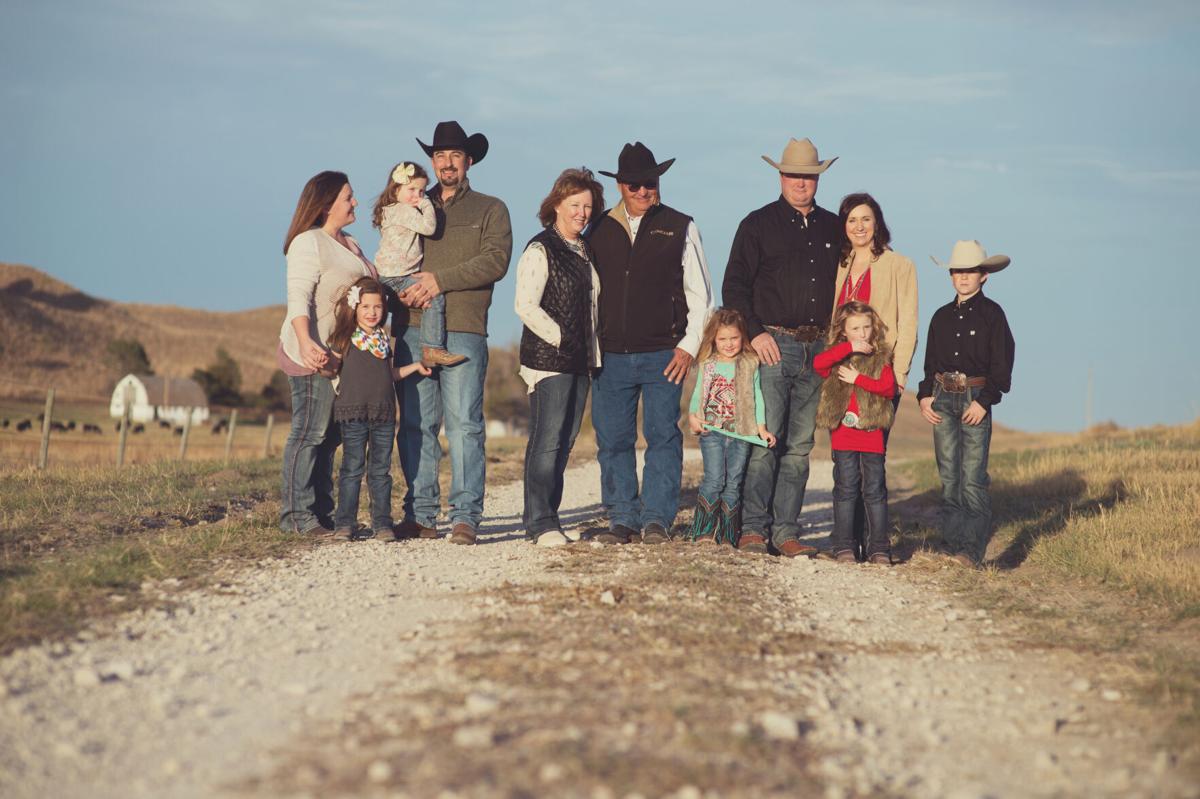 The Krebs Ranch family is a small but mighty force in Nebraska’s cattle industry. The family (from left) is comprised of the Scotts — Kami, Louisa Payton, Harper, and Jake; the elder Krebs — Louisa and Eldon; and the younger Krebs — Kashlynn, Ty, Kaleigh, Kynsleigh, and Sage. 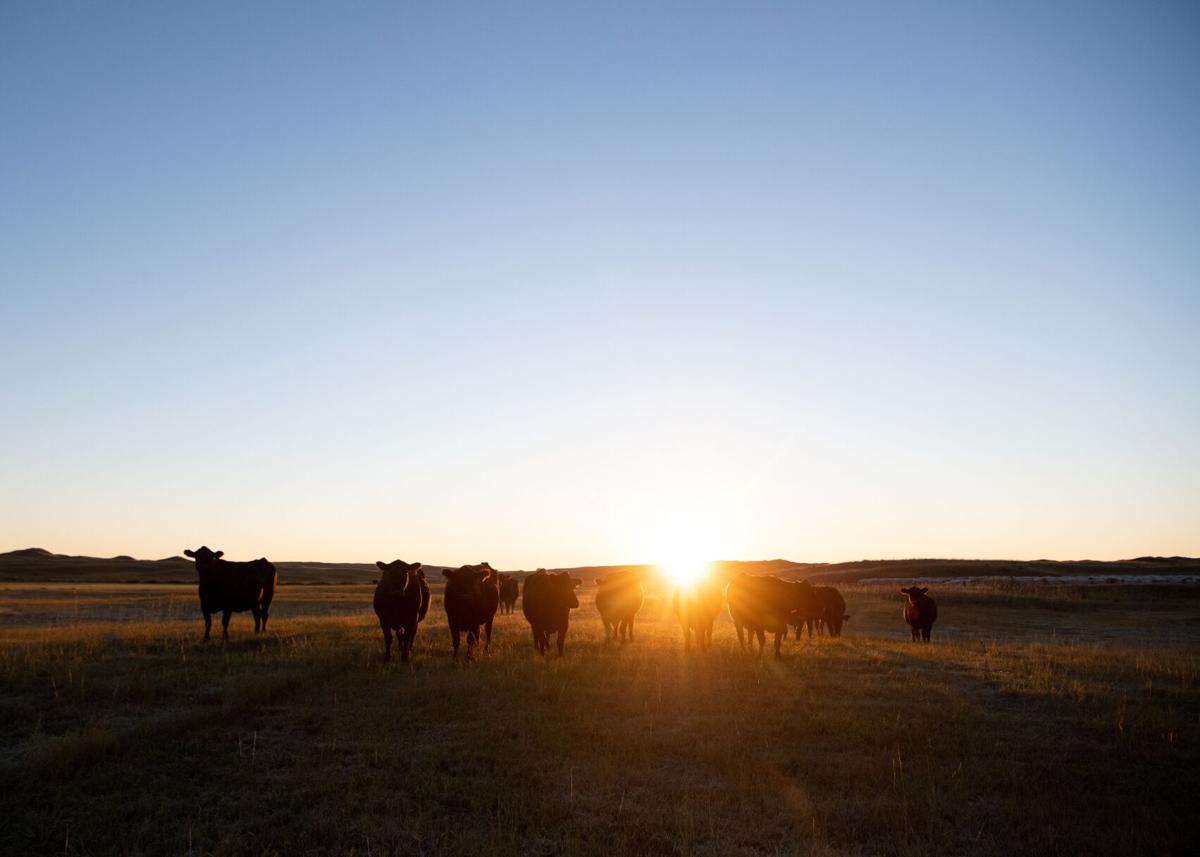 Though they’ve diversified in recent years to accommodate the growing family’s range of interests, Krebs Ranch in the Sandhills has been known for their Angus seedstock operation since the ‘80s.

For the cattle jugglers of Gordon, Nebraska, the competition is fierce — but so is the love.

At Krebs Ranch, settled on the grassy dunes of the Nebraska Sandhills, there’s a lot of people and cattle sharing space. Three generations of Krebs work side-by-side in a sea of Angus, Hereford, Charolais and Simmentals — with a little bit of this, that and the other thrown into the mix.

Known for their Angus seedstock, the Krebs’ mixed cattle collection began when generation No. 3 entered the arena.

“My kids will show anything I want to put a halter on,” said Ty Krebs, son of first-generation Krebs Ranch owners, Eldon and Louisa Krebs. “Last year, my kids wanted to branch out and do something different. We’ve acquired some crossbreeds, so the kids can do what they want and get more involved, too.”

They say variety is the spice of life, but for the Krebs, variety may just be the ingredient they needed to keep things cordial.

“Between my three, it is very highly competitive. No matter how we do at a show, somebody’s got a quiet ride back home,” Ty said, chuckling softly. “Somebody’s usually mad at the end of the day.”

Fortunately for Ty and his three kids — Sage, 15, Kynsleigh, 11, and Kashlynn, 10 — Ty’s sister, Kami Scott, and her two kids — Louisa Payton, 9, and Harper, 7 — bleed the blackest blood of Angus lovers. With the Krebs kids more focused on Herefords and crossbreeds, the cousins don’t often go head-to-head in the show ring.

The showmanship arena can get a little dicey at times, it’s true. But love of family always wins out.

“I think anybody who knows our family would know that competitiveness runs pretty deep,” Kami said with warm laughter. “But we’re also each other’s biggest cheerleaders.”

Having so many kids growing up together on the ranch, with one just as equally passionate about cattle as the next, is a dream for Ty and Kami, who were raised the exact same way. It does come with hurdles, most of which the brother-sister team and their spouses — Ty’s wife, Kaleigh, and Kami’s husband, Jake — have learned to navigate, like keeping siblings on opposite sides of the chute if one isn’t doing exactly what the other thinks they should.

There’s plenty of shiny moments though, like when all three of Ty’s kids jump at the chance to calve in the middle of the night together.

“I think it’s because they get to stay up and watch TV … eat cookies and stuff,” he jested, making his sister laugh in agreement.

With so many different breeds of cattle on the ranch now, the distance has increased a bit. The Krebs and Scott families often go to different livestock shows, and they tend their show calves in numerous spots around the acreage. But when they all come together to work or show at an event, Kami attested — it’s entertaining.

It’s also a source of pride for her and her big brother — and their parents, who attend every show and event that they possibly can as the proud grandparents.

And the payoff is huge. The blood, sweat and tears shed since Eldon and Louisa began their legacy in 1987 have sewn meaning into the land for their descendants. All three generations live on the ranch and work their separate and combined herds together, all performing an equally important role in the ranch’s success. The same spirit that drives their competition also strengthens their bonds with each other, and with the place they call home.

“(The kids) want to do this, they enjoy it,” Ty said. “They get onto me when I don’t make enough time for their stuff.

“It’s almost humbling, you realize you’re not working for yourself, you’re working for their future, too.”

Ty recalled a conversation he had with his father, years before any of the grandkids were born. Elton was steadfast in his belief that their third generation would one day take the helm at Krebs Ranch.

“I hope they all want to be involved in it,” Ty said. “As a parent, you hope they want to follow in the footsteps you led them down.”

Just as siblings do, Kami picked up where Ty left off, finishing thoughts they’ve likely shared more than a time or two over the years.

“We hope they find something they’re passionate about,” she said, “and if they’re lucky enough that it’s something they can bring back to the family operation, or be excited about, it would just be a blessing.”

Although it’s just a barn, experts in hog and cattle barn construction say choosing a good location on the operation is more important than pr…

The Krebs Ranch family is a small but mighty force in Nebraska’s cattle industry. The family (from left) is comprised of the Scotts — Kami, Louisa Payton, Harper, and Jake; the elder Krebs — Louisa and Eldon; and the younger Krebs — Kashlynn, Ty, Kaleigh, Kynsleigh, and Sage. 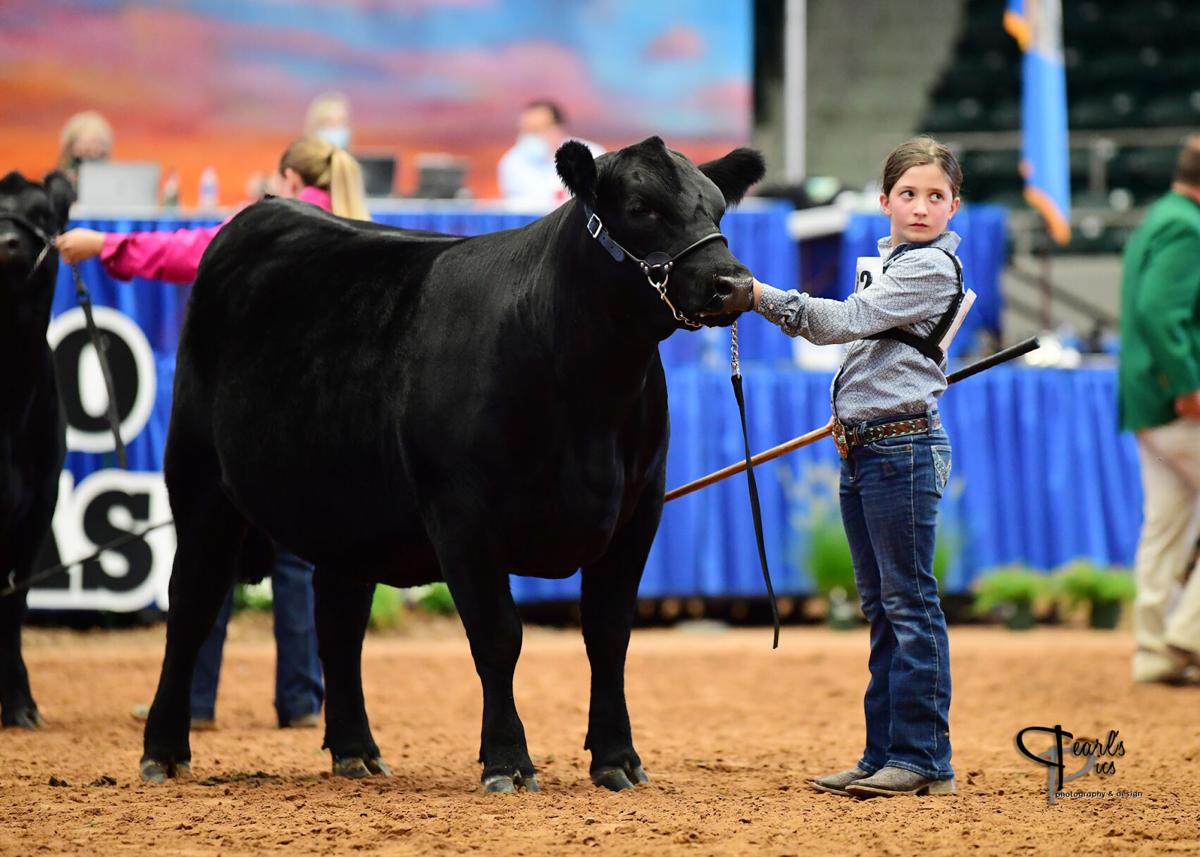 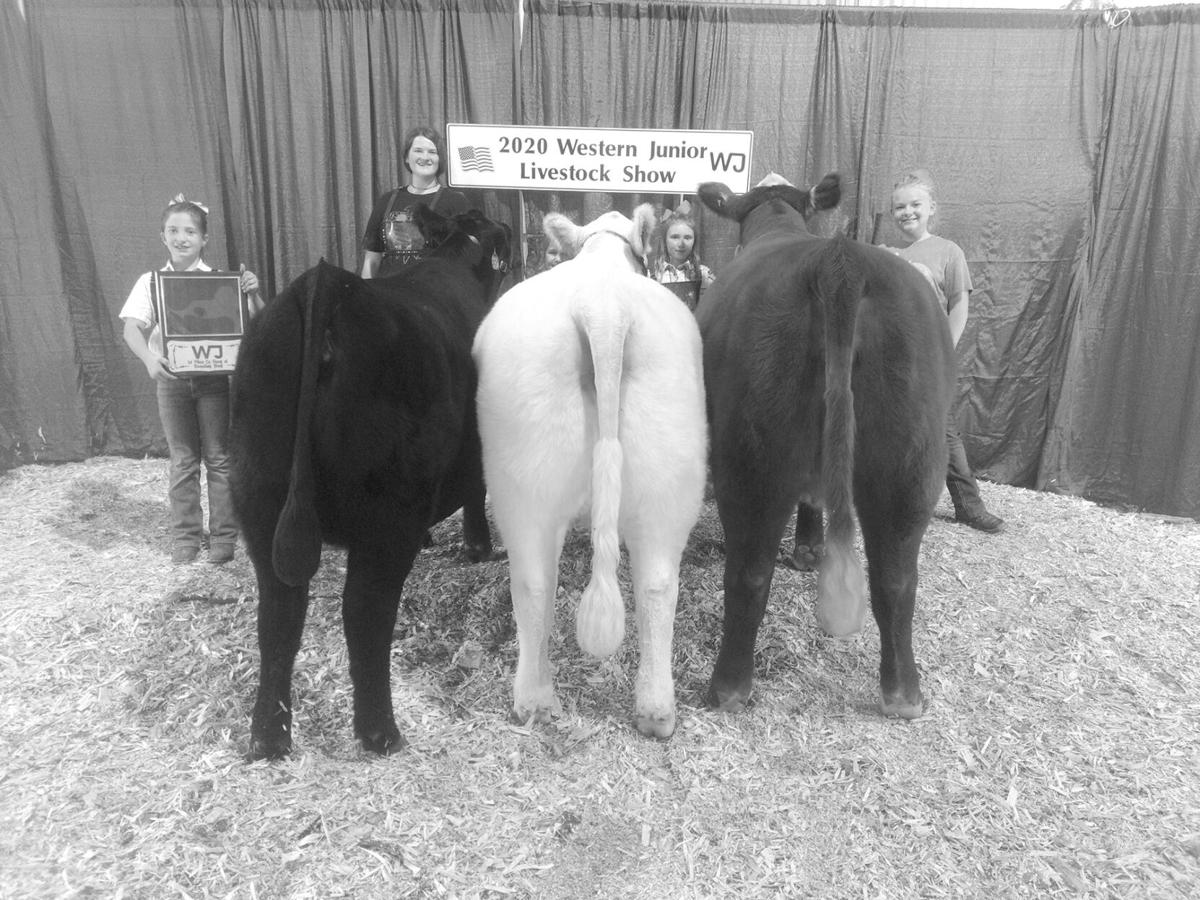 Payton, Kynsleigh and Kash won top honors together, claiming the champion pen of three breeding heifers at the 2020 Western Junior Livestock Show. In this celebratory photo, the cousins are standing near their respective Champion Angus, Champion Charolais and Champion Hereford heifers. 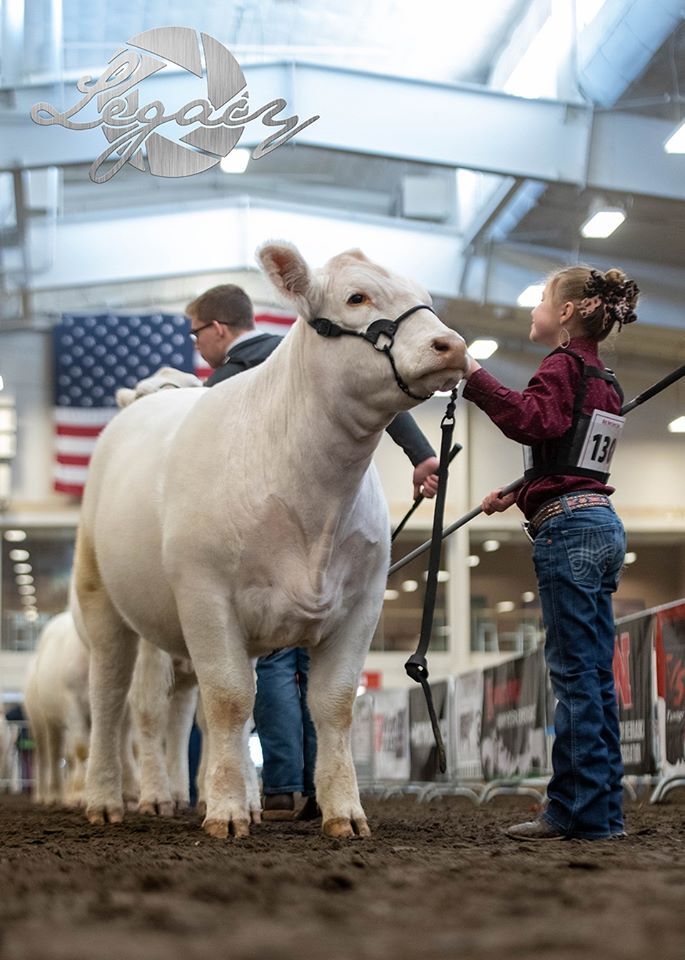 Kashlynn watches the judges while handling her Charolais heifer with ease at a recent show. 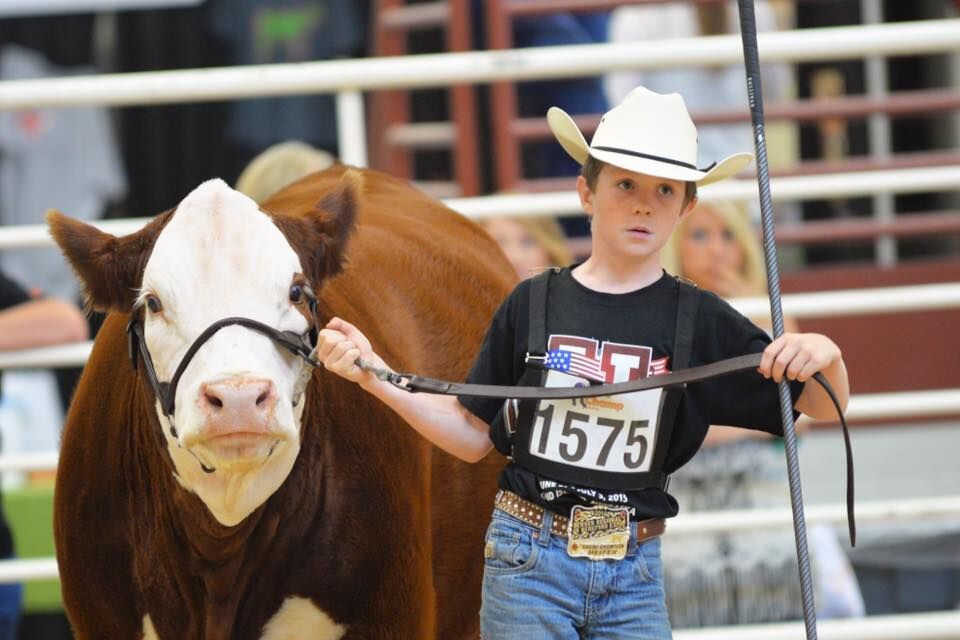 Sage shows his Hereford at the Junior National Hereford Expo.

Though they’ve diversified in recent years to accommodate the growing family’s range of interests, Krebs Ranch in the Sandhills has been known for their Angus seedstock operation since the ‘80s.