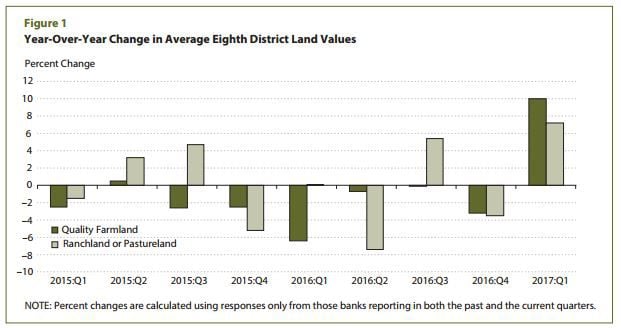 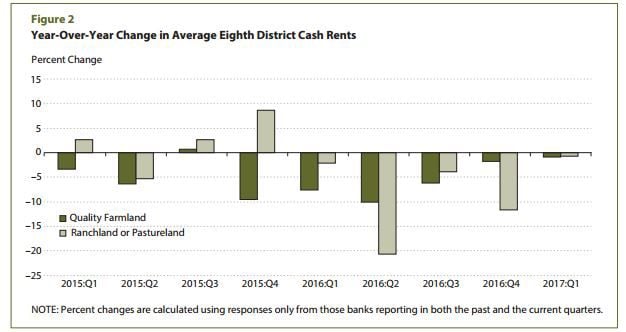 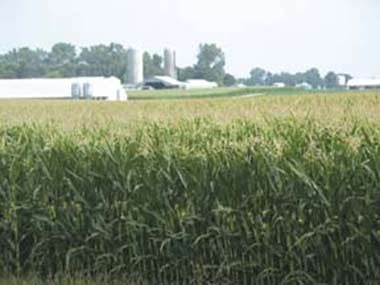 ST. LOUIS ― While farm income continued to decline in the Midwest and Mid-South during the first quarter of 2017, values for quality farmland and ranchland or pastureland experienced the largest increases in three and a half years, according to the latest Agricultural Finance Monitor published by the Federal Reserve Bank of St. Louis.

The survey was conducted from March 15-March 31, 2017. The results were based on the responses of 32 agricultural banks located within the boundaries of the Eighth Federal Reserve District. The Eighth District comprises all or parts of the following seven Midwest and Mid-South states: Arkansas, Illinois, Indiana, Kentucky, Mississippi, Missouri and Tennessee. The survey also included three special questions that focused on farm loan portfolios and bankers’ top concerns for 2017.

Agricultural lenders continued to report lower farm income levels compared with a year earlier. Based on a diffusion index methodology with a base of 100 (results above 100 indicate higher income compared with the same quarter a year earlier; results lower than 100 indicate lower income), the diffusion index for farm income during the first quarter of 2017 was 55. This represents the 13th consecutive quarter of an income index below 100. Looking forward, fewer lenders – although still a majority – expect the income decline to continue in the second quarter.

“This development is heartening because it suggests that a rising number of bankers—though still a minority—are noting that farm income has stopped declining from year-earlier levels,” the report stated.

According to an Illinois lender, “Soybean prices held up well, which allowed farmers to market their 2016 crop at a higher price than projected. Although corn prices have trended lower, producing some concern for 2017 crop income, the majority of our customers are very good marketers and will do okay by holding their costs down.”

“Real estate values fell in 2016; however, recent land sales are showing some strength, which has helped to bring prices back up slightly,” according to the Illinois lender.

Looking ahead, the majority of lenders did not expect this price growth to be sustained into the next quarter.

The survey asked bankers three special questions covering the health of their loan portfolios, borrowing capacity of customers, and their top area of concern for 2017.