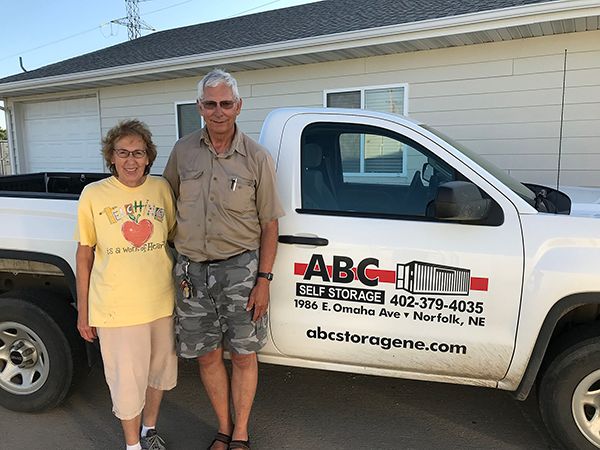 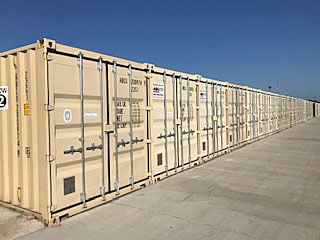 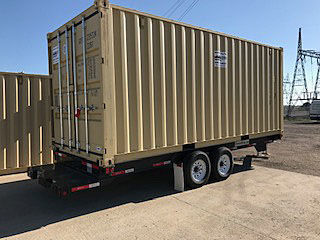 Throughout their 44 years of marriage, Bernie and Carol Wrede raised alfalfa, soybeans, corn and two daughters — Jamie and Joanie, in Pierce County, Neb.

Bernie explained the history of how they created ABC Storage.

“I was farming and hauling my dairy hay to Wisconsin and Pennsylvania and on the way home, I was looking for backhaul loads to Nebraska,” Bernie said. “I started picking up containers in Chicago to take to the depots in Omaha. I started with two containers and Wal-Mart was my first customer.

“Along with the farming and hauling containers for other businesses, I created ABC Mobile Storage and then started renting and selling containers out of Norfolk. I also started a self-storage facility — ABC Secure Storage — using the containers lined up next to each other. I also was involved in a trucking business — Wrede Farms. We hauled containers and other loads such as big, square alfalfa bales and grain.”

Bernie’s motto is sound, “Don’t worry about who gets the credit for doing the job, build customer relations, network and be involved with charitable groups.”

At the center of what they do every day are their employees tirelessly serving customers, he said.

“Our employees are valuable because they are the face of the business — the ones who do the work and the ones the customers see,” Bernie said.

While they have celebrated many successes, the Wredes are not unlike other businesses that experience some challenges along the way. Most recently, they too dealt with the aftermath of the March 2019 flooding.

“Our farm home in Pierce County was completely surrounded by water,” Carol explained. “But praise God, no floodwater came into the basement. We did have groundwater seepage in the basement, so the sump pumps did their job.

“The flood destroyed bridges and the roads, making it difficult to get to work in Norfolk. Our ABC Secure Storage business in Norfolk was a disaster. The floodwaters lifted the containers and they started floating around like corks in a bowl of water. It took two months of labor, heavy equipment and a tremendous amount of money to return the site back to its original working condition.”

She added that the office building was flooded with seven inches of water, which ruined the office electronics — computers, surveillance cameras, and the phone system.

Luckily, the Wredes received a little pick-me-up in the form of volunteers from the Orphan Grain Train in Norfolk. Volunteers assisted customers in sorting and cleaning their storage units, and the company provided two power washers for the Wredes to wash out all of the containers.

Despite the recent challenges, the Wredes are proud to serve others across the region and continue to look forward to the future. Bernie said what has been most exciting about the business, “is having my wife working beside me for the last seven years. It’s all about getting the job done effectively, successfully, economically and promptly.”