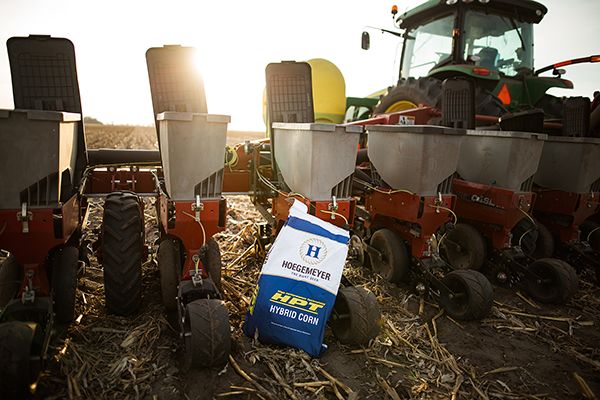 The right seed for a farm can make or break a growing season, if not the operation itself.

Hoegemeyer Hybrids has been in the business to provide the right seed for its customers since the 1930s. Hoegemeyer is a regional seed company that’s had a lot of practice providing innovative products and exceptional service to its customers.

“The company was founded by my great-grandfather and grandfather together in 1937,” said Stephan Becerra, Hoegemeyer Hybrids general manager. “Like so many of the regional seed companies that started back then, our family’s farming operation was the one designated in Dodge County, Nebraska, to help serve the local community with seed. That’s how most of the seed companies got their start back then, by supplying seed to their neighbors.

“My grandfather, Leonard, as well as his son, my uncle Tom, were plant breeders, who both had advanced degrees” he added. “They both brought home a lot of their knowledge and over the years built an impressive research program focusing on genetic improvements aimed at the Western Corn Belt.”

“We feel like we have a leg up on the competition as far as customizing and bringing the right products to our customers that we serve,” Becerra said. “The Western Corn Belt is a continuum of extremes.

“You have some producers who have full irrigation potential, use a lot of inputs, are focused on 300 bushels per acre corn yield, and regularly achieve it,” Becerra said. “There’s another segment of farmers who work dryland, with low inputs, and are thrilled with 120 bushels an acre yield. You have to understand the different types of products each customer needs to be successful.”

There are also diseases specific to the Western Corn Belt, which means they have to look at different disease matrices than in other areas. There’s a change in elevation from one side of the state to another as people get closer to the Rockies. Becerra said that means there are a lot of different environments they have to understand in order for their customers to succeed.

“You need products out here in the west that can stand up to the wind and other tough conditions,” he said. “Drought and heat stress are two of the toughest growing season conditions out here in the west. Standability and harvestable yield are something we focus on because it’s one thing to grow it in the field, but you also have to get it in the bin.”

Hoegemeyer’s 80-plus years of experience has taught them a lot about how to provide hybrids that can stand up to the variable conditions. The entire seed industry has also benefitted greatly from the rapid advances in technology and how quickly new products can be developed and released. They know what grows best in Nebraska and their local expertise allows Hoegemeyer to customize recommendations and products for each individual.

“We also sell outside of Nebraska, too,” Becerra said. “What we consider the Western Corn Belt is the western half of Iowa, all of Nebraska, southern South Dakota, a little bit in Missouri, along with Kansas and Oklahoma.”

The seed industry is extremely competitive, and Becerra said they work hard to stand out from the rest. “It’s very competitive,” he said. “I keep going back to this but our key to success is knowing our customers and knowing what their needs are. Our company culture also helps. We have a lot of long-term employees, as well as dealers that are multi-generational. It’s all about building a foundation of trust.”

Becerra said they build that foundation by standing behind their products, charging a fair price for them, as well as the personalized customer service that they’re able to match up with their products, are all factors that help build trust.

“Think about it from the farmer’s perspective,” he added. “They’re choosing to put their trust in the seed that has everything to do with their livelihood. It’s a leap of faith to go ahead and plant seeds and expect a good outcome. However, things don’t always go right and it’s vital that we be there to help them along. We’re more about building long-term relationships than growing ‘by hook or by crook.’”

They have a new product that was just approved, the Enlist E3 soybeans. He said the new varieties provide tolerance to glufosinate and glyphosate. It also adds in 2,4-D tolerance.

What’s most interesting to Becerra is the 2,4-D Colex-D technology package that comes with it.

“As most people know, Dow AgroSciences LLC and DuPont came together,” he said. “In about a month, we’ll spin off as Corteva Agriscience. The crop protection options that they’ll be bringing forward with the new 2,4-D Colex-D technology really minimizes the drift and other challenges that are associated with some other technologies in the marketplace. The ease of use and options to help manage weed resistance is going to be very attractive to our customers.”

Chad Smith can be reached at chad.smith@midwestmessenger.com.

More in Businesses of Agriculture (25 of 43)