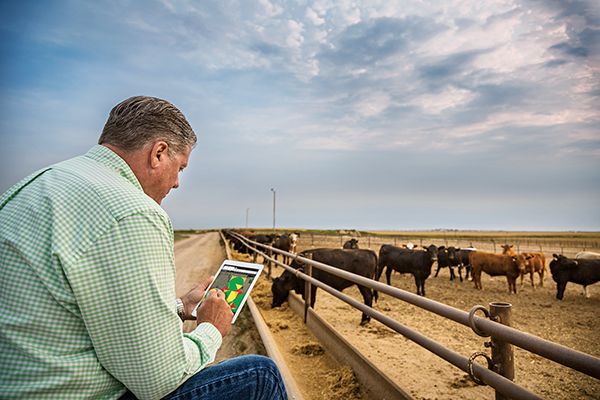 Lindsay Corp. has roots that go deep into Nebraska agriculture, tracing back to the 1950s. It’s primarily an irrigation company, but it has branched out into other areas as the decades have gone by. It’s a global company that has always stayed loyal to Nebraska, its home state.

“We are primarily an irrigation company,” said Brad Dunbar, Lindsay’s regional manager covering Kansas and southern Nebraska. “We got a start in Lindsay, Nebraska, and are a publicly traded company. This is actually the 50th anniversary of our first Zimmatic center pivot. The first Zimmatic went out the door in 1969.”

Dunbar said lasting 50 years in business of any kind is quite an accomplishment. The overall business began as a welding shop and gas station. Paul Zimmerer and his sons, Art and Bernie, were involved in the business back then. Dunbar said it was Paul’s boys that really pushed Paul to get into the center-pivot business.

“If you’ve ever been in the Lindsay area, you know the terrain of the area is basically rolling hills,” Dunbar said. “The first requirement for a successful pivot was to be able to climb those hills. From that point forward, it was known as the ‘Hill Climber.’ That first pivot is still running today. Our retired president of engineering has it running on one of his farms.

“After that first pivot was produced, demand picked up really fast,” he added. “The company was growing, and we brought on a lot of our long-term employees at that time. In the mid-1970s, the company was sold because of the growth-trajectory it was on. Dekalb bought the company because they figured selling irrigation would fit in right beside the seed they were selling to producers.”

Then came the 1980s and the farm crisis. Up until that decade, Dunbar said, a lot of companies were in the irrigation business. As the farm economy was hit hard, the business went from roughly 30 companies manufacturing center pivots down to just a few. He said Lindsay was fortunate to get through that time and was helped out by the fact that they were also selling a lot of their machines on the international market.

It was around that time that Dekalb was making changes within their business structure, so Lindsay soon became a publicly traded company. They remain publicly traded to this day. During the 1980s, Lindsay began to slowly diversify its business ventures, making acquisition and mergers through the 1990s and into the early 2000s.

“Some diversification was within agriculture and some was outside of it,” Dunbar recalled. “We did a lot with new technology. One of the new products is called the Road Zipper. We make crash cushions and movable barricades for roads.

“In fact, travelers on the Golden Gate Bridge will see some of those products,” he said. “We have a Road Zipper system on it today. They move those barriers multiple times every day. They want multiple lanes in the morning, when people are driving into the city. They move the barriers to make multiple lanes heading out of San Francisco in rush hour.”

One of the biggest opportunities for the country was technology back in the 1990s. They went to a telemetry-style platform that allowed producers to communicate remotely with their pivots. As the technology developed, pivots can be controlled by cell phones, tablets and computers.

“Today, with our product called FieldNET Advisor,” Dunbar said, “we can now crop growth stage, what soil types are on that field, what the historic precipitation was throughout the previous winter, which helps us know where the soil profile is at. We also know what hybrid was planted in each field and when it was planted. That allows us to model that crop throughout the year and deliver well-informed irrigation prescriptions for each field.

“The technology in agriculture we’ve developed even in the last five years has been amazing,” Dunbar added. “We’ve had a product out for a number of years that’s full VRI (Variable Rate Irrigation). We can control a machine right down to the individual sprinkler. We can take a look at multiple soil types in a field, multiple hybrids in a field, and potentially be able to put down different amounts of water. If we’re putting fertilizer through that machine, we can also do variable-rate applications.”

Dunbar, who’s been with Lindsay for 12 years, says the company puts its customers first when it comes to innovation. Paul, Art, and Bernie Zimmerer had that “in their DNA, through-and-through.” While they were all about innovation, they asked customers directly how they could make things work better for them.

“Agriculture is still our bread-and-butter,” Dunbar said. “That’s where the majority of our business is, in the ag segment. And Nebraska is our home. We started in Lindsay, Nebraska, and our main pivot manufacturing plant is still there. Our world headquarters are located in Omaha.”

More in Businesses of Agriculture (41 of 43)