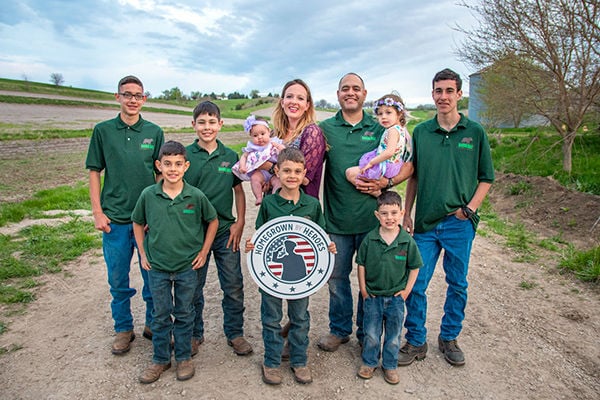 The Barreras family of Blair, Neb., poses with the Homegrown by Heroes logo. The program promotes products grown by veterans in agriculture. Anthony Barreras has served in the Army nearly 20 years. 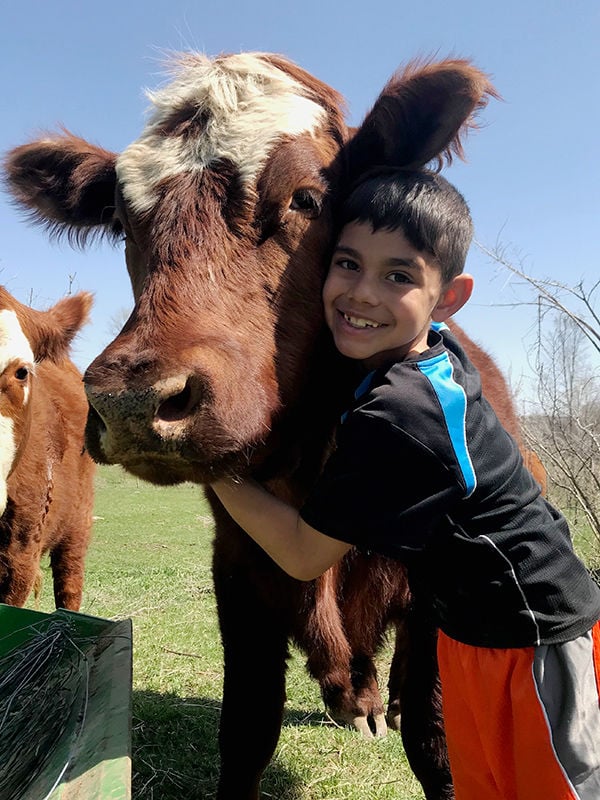 One of the Barreras children gets cozy with his livestock in Blair, Neb. 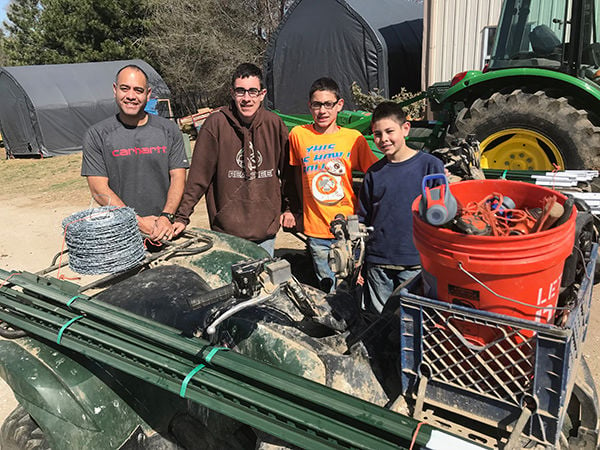 Anthony Barreras, left, poses with three of his sons while building fence on the farm in Blair, Neb. The family has had to balance farm work with Barreras’s service in the Army. 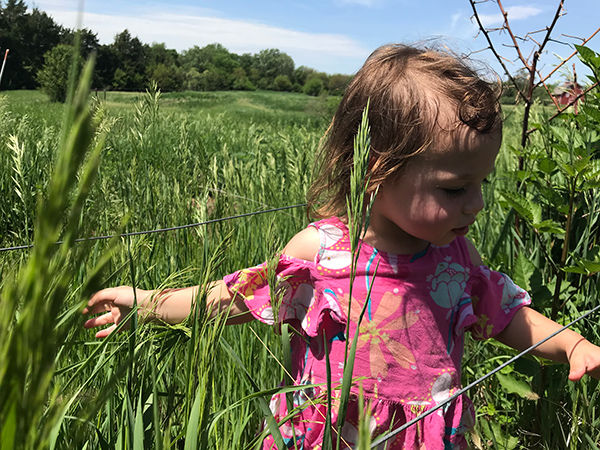 One of the Barreras children explores pastures on the family farm in Blair, Neb.

The Barreras family of Blair, Neb., poses with the Homegrown by Heroes logo. The program promotes products grown by veterans in agriculture. Anthony Barreras has served in the Army nearly 20 years.

One of the Barreras children gets cozy with his livestock in Blair, Neb.

Anthony Barreras, left, poses with three of his sons while building fence on the farm in Blair, Neb. The family has had to balance farm work with Barreras’s service in the Army.

One of the Barreras children explores pastures on the family farm in Blair, Neb.

Mariel and Anthony Barreras, owners and operators of Barreras Family Farm, know the challenges of balancing life in the military while making a living on the farm.

Anthony will have served 20 years of active duty in the Army next month. In that time, his family has grown to eight children, ranging in age from 15 to 8 months.

When stationed in California, the family started what Mariel calls a “hobby farm.” They eventually moved to the Blair, Nebraska area and have expanded to producing several hundred chickens, pork, beef and raw goat milk in a sustainable fashion. They also sell honey and provide agritourism and educational opportunities for both adults and children.

Their journey has not come without sacrifice and challenges. Anthony was called to serve again after the family made the move to Nebraska.

“We made the difficult decision to have him move to Kansas while we stayed here on the farm to make it all work,” Mariel said. “He comes home on most Saturdays now and we are working hard to keep it all together until he comes home.”

The couple was recently honored by the Center for Rural Affairs with a Citizenship Award.

The rural-focused nonprofit recently studied the challenges and resources available to servicemen and women who are looking at entering the agricultural industry. The result was “Saluting Service: A Guide to Lending and Farm Program Resources for Veterans.”

Often, finding farm land is the biggest challenge. The guide points out that supporting the next generation in agriculture is vital when considering the amount of land that will transfer management and ownership in coming years.

A total 4.45 million Nebraska acres were expected to change hands between 2014 and 2019, according to the U.S. Department of Agriculture (USDA) National Agricultural Statistics Service in 2014.About 360,000 acres of that would leave the family, more than 445,000 would stay in the family name, and the rest would become trust land.

The numbers haven’t been updated to reflect the most recent Census of Agriculture, but it shows explicit need for supporting the next generation of producers, according to the Center for Rural Affairs report.

A 2016 survey by the center found high rent, land, startup and operating costs were barriers in participation in programs meant to help beginning farmers – programs like the Conservation Reserve Program (CRP) – Transition Incentives Program. Without such assistance programs, many new farmers coming out of the military find it hard to compete with established producers to access resources like land and operating loans.

“Many beginning farmers including veteran farmers, struggle to access land,” it said. “In addition … competition with established producers remains a challenge for new farmers.”

The Barreras family used a USDA loan to help purchase their current property. They also work closely with the Farmer Veteran Coalition – Homegrown by Heroes program that serves to inform consumers that products with the program logo were produced by military veterans.

“I think it would be helpful if there was some type of educational program that outlined agricultural resources available to military before they get out of the service,” Mariel said.

Lenders are not always favorable to military service members and their families because they see multiple address changes, she said. Marine and Army members often move every 18 to 24 months. The retirement process takes almost a year. During that time, having resources available so you could actively plan for a successful transition to agriculture would help veterans be successful, Mariel said.

Mariel has a master’s degree in non-profit management and a minor in marketing. Because of her degree, she had the skillset to do a farm business plan with her husband. She has also served as a Family Readiness Group leader for the military.

“My husband would be the commander taking care of soldiers and I would be on the home front taking care of issues impacting soldiers’ parents, wives and kids so that soldiers could concentrate on their mission,” she said.

All of this experience has helped Mariel and her husband face some of the real challenges to starting their sustainable, small farm that may look different from other agricultural endeavors in their area. That’s been another challenge.

“Sometimes, some neighbors and county and community leadership, do not see us as ‘real’ farmers because we are not row-croppers. The state of Nebraska says we are a farm, but when you are a minority in what you are doing, it can be difficult to get through local barriers.”

Increasing educational resources for their farming veteran peers and supporting their community, means everything to the Barreras family.

“We have learned much the hard way,” Mariel said.

When they lost 500 chickens this winter, they filed a claim with the USDA indemnity program, but because they didn’t take photos of their losses, they were denied help.

“We were not thinking of taking pictures of our livestock at the time we were mourning and devastated,” Mariel said. “We just didn’t know.”

She teaches adult classes at the Metropolitan Community College, and with them she’s sure to share what her difficult lessons have taught her.

“Coming together and sharing resources is what it is all about,” she said.

The Center for Rural Affairs Saluting Service guide is a start, she said.

The guide can be found online at www.cfra.org/publications/SalutingService