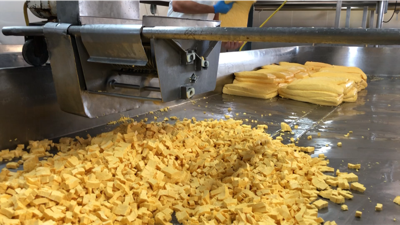 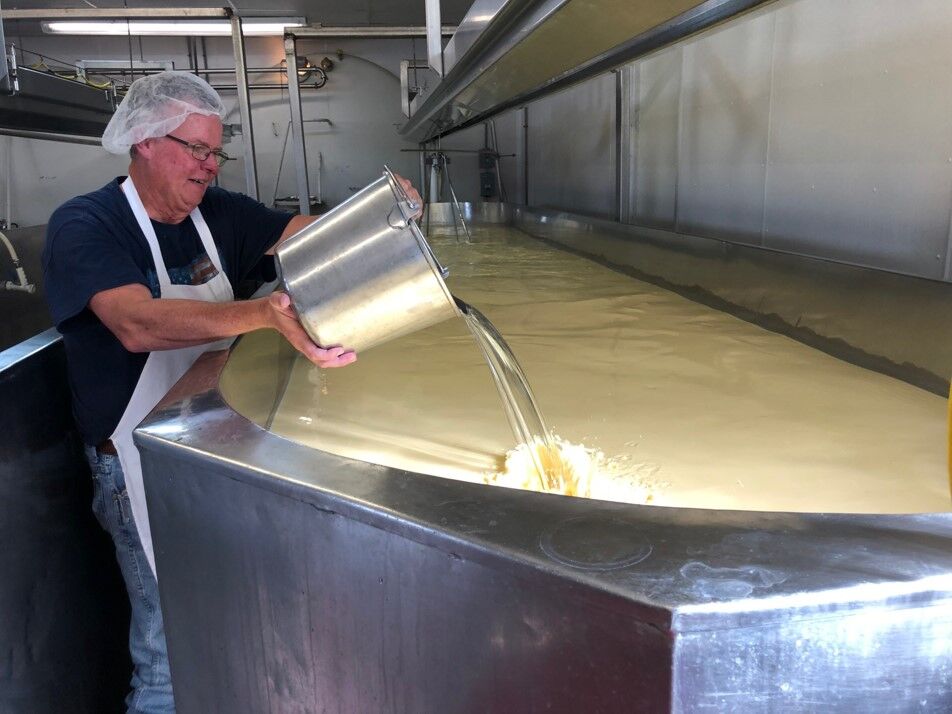 A cheese maker at the Alma Creamery in east central Kansas adds rennet to 20,000 pounds of cultured milk. 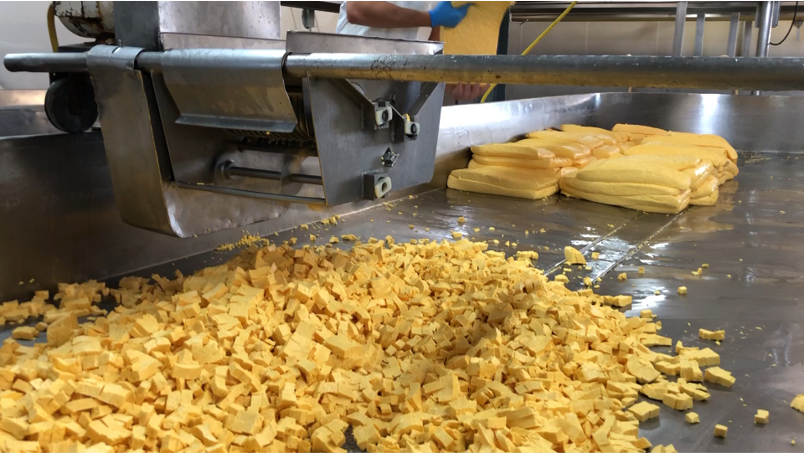 The Alma Creamery in east-central Kansas creates cheeses year-round, but activity has ramped up for the holiday season.

“All we do is cheese,” general manager Cliff Cain said.

During the holiday season, that means selling lots of gift boxes from the creamery in Alma. Soon, though, the business will be part of a new roadside retail shop.

Located in Alma, 40 miles west of the capital city of Topeka, the creamery has been in in the Alma community since 1946. The cheese factory, works closely with Ohlde Dairy in Linn, Kansas to creates yellow and white cheddars, and jack cheeses.

Over half of their business is in curds, including traditional yellow cheese curds, white cheese curds and pepper cheddar. The company introduced four new flavors a couple of years ago: a dill, Mediterranean, garlic, and a flavor resembling Buffalo wings.

“Unless you lived in Wisconsin or traveled to a creamery, you may not know what a curd is,” Cain said.

It all starts with curds, about the size of cottage cheese curds, explained Cain, who has been general manager for five years and also makes cheeses. Longtime cheesemaker Alvin Kahle passed away in 2019.

There are pressed blocks, which weigh in at 40 pounds or more before they are a cut down into a variety of smaller sizes for consumer and commercial use.

There are pressed horns, weighing 13.5 pounds or more. Those are cut down into full moons, half moons and other varieties for consumer and commercial use.

Lastly, there are curd baskets where the curds are allowed to drain any excess whey overnight in a cool environment before they are transferred into long-term storage or immediate use containers.

Alma Creamery has three major distributors. One is Kroger, which is unique for a small company. Others are U.S. Foods and a regional distributor, Fanestil in Emporia, Kansas.

Alma Creamery is growing, and is enthusiastic about soon launching a retail store. Plans are for them to be one of the anchor tenants at a large truck-stop called the Flint Hills Plaza off Interstate 70 at the intersection of Kansas Highway 99.

The target opening date is in mid-February.

Alma Creamery plans to sell fresh curds of yellow or white cheddar. They’ll offer 12 additional flavors of curds, possibly including of a hot pepper chili, maple cinnamon or mocha, according to Cain. They’ve also been testing a spicy horseradish cheese, which they expect to bring to market in the coming months.

Alma Creamery gets supportive promotion through the Kansas Department of Agriculture’s From the Land of Kansas program, which was launched in 1978 as a marketing tool to help promote and develop markets for Kansas agricultural products. Alma Creamery was one of its original participants.

At its location, the creamery offers many gift boxes with all local products to help others grow their business.

“This program helps get products ‘From the Land of Kansas’ into homes across the whole United States,” said Heather Lansdowne, spokeswoman for the Kansas Department of Agriculture.

One benefit for businesses participating in the From the Land of Kansas membership is to be considered for the holiday gift box program that grows larger every year.

The Hansen family has owned the Alma Creamery since 1986 and are big supporters of the community.

There are decades of cheese-making knowledge at Alma Creamery, and the plant also welcomes new people eager to learn the business.

Cheese-making is much different process than one would think, Cain said. There are 15 to 50 different steps he said. He encourages those learning to ask a lot of good questions as they learn, and they do, he said, adding that the creamery has a good staff on board.

A cheese maker at the Alma Creamery in east central Kansas adds rennet to 20,000 pounds of cultured milk. 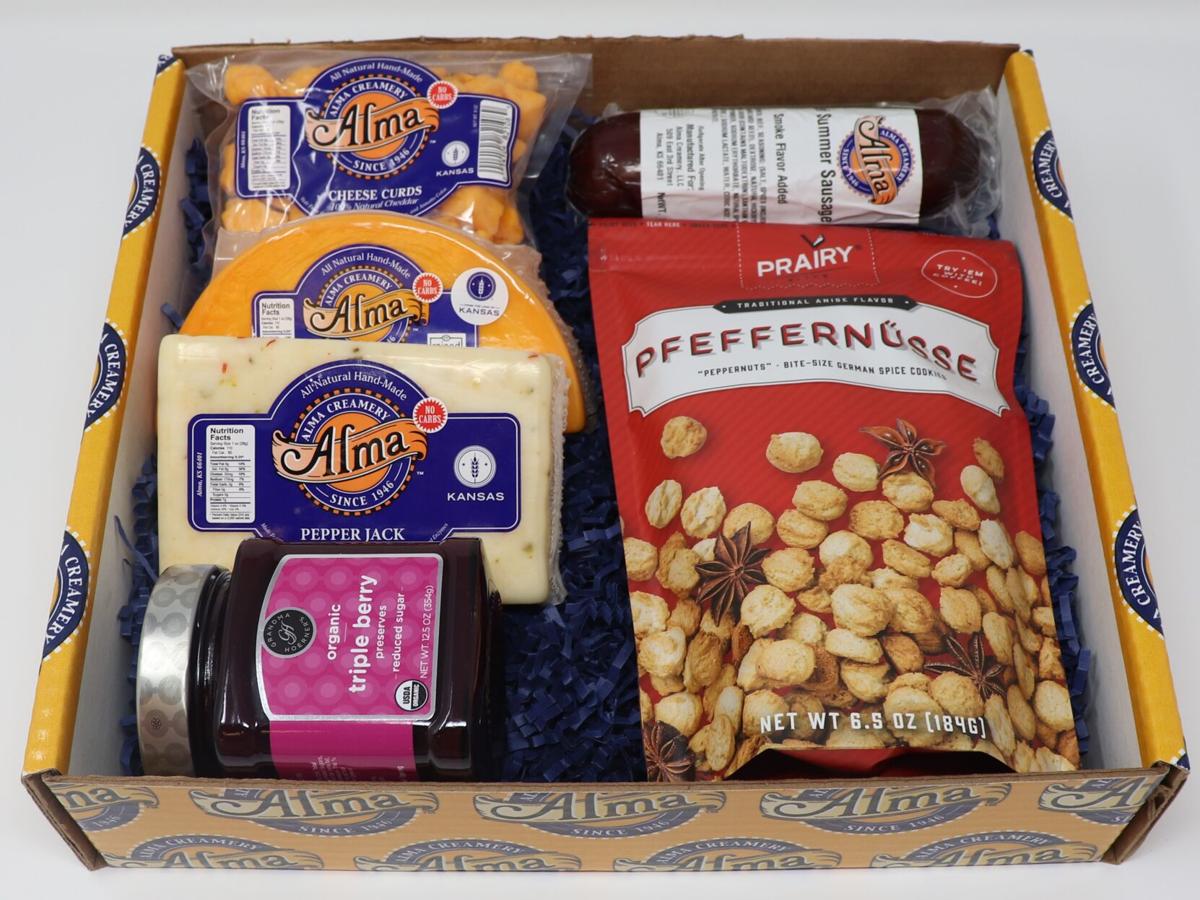 This gift box that includes both Alma Creamery cheese and other Kansas-made products.