The barred rock variety of the Plymouth rock chickens has one of the classic looks known among poultry.

Named for the “bars” of black on each feather, its feathers have a zebra-like look with black and white striping.

The first specimens were shown at a fair in Boston, Massachusetts in 1849, and then disappeared until 20 years later when a Mr. Upham of Massachusetts bred barred roosters to Java hens to make the barred rock.

Year of acceptance by the American Poultry Association: 1874

The Heart of America Poultry Club

Interesting breed fact: The barred (Plymouth) rock hen was the basis for the broiler industry until World War II, when more productive breeds of hens were produced. Throughout WWII rationing, they kept meat protein and eggs in the American diet.

The heritage breed of the chicken is known for being meat producing first and egg producing second. But there’s a big difference between heritage birds and production birds, said Jeremy Woeppel, of Chambers, Nebraska.

He’s been raising Barred Rocks for 14 years, and he says hatcheries have crossed different laying breeds into the barred rocks to make them layers and not broilers.

Barred rocks are easy to raise and self-sustaining, Woeppel said. He characterizes them as a “get down to business, I’m going to do my own thing and you don’t have to worry about me” type of bird.

They love to forage as well.

“I open things up and have the area to let them forage,” he said. “That’s a big thing with these birds. It cuts down on feed costs.”

Heritage stock doesn’t feather out as quickly as production stock, especially the males. At four or five weeks of age or older, the males may have no feathers on their bodies, only wing feathers.

“They look like little dinosaurs,” Woeppel said. “Usually the last one to feather out of the bunch is your best barred male in the bunch. That’s usually a good indication that he’ll have the best barring.”

Some males will take an entire year to totally feather out. The females feather out much quicker.

There’s a place for both heritage and production birds, he said. Some people want the heritage birds, which are slower to start producing eggs but will produce eggs over a longer period of time. A quality barred rock, Woeppel said, will lay eggs consistently for five to seven years. Hatchery (or production) birds will lay eggs sooner than heritage barred rocks but not for as long.

Because the Barred Rocks are meat-producing birds before eggs, they will get broody, meaning they will lay fewer eggs and try to hatch out the eggs they do lay.

“They lay pretty good,” Woeppel said, “but if one starts going broody, they all start. You can break them of it, but there will be a three- or four-week period where you won’t get any eggs.”

The flavor of the heritage barred rock meat is very good, Woeppel said.

“If you eat a production bird and a heritage bird, there’s a night and day difference,” he said.

Heritage Barred Rocks can be butchered at 16 weeks or older, and Woeppel recommends cooking them differently than store-bought chicken. He and his family have had good results slow cooking or flash cooking them.

Heritage males average from 12 to 14 pounds, with females weighing in at six to eight pounds.

Barred rocks are one variety of the Plymouth rock. Other varieties, or colors, of Plymouth rocks include the white rocks, silver penciled rocks, buff rocks and black rocks.

The birds are friendly and roosters usually aren’t aggressive, but Woeppel points out that roosters have a job to do. For the male bird, “his responsibility is to protect the flock. You want him to be so if something comes in (the coop), he’s the first one there to protect the hens and pullets.

Woeppel points out that people choose production or heritage birds for their end goal. Hatchery birds produce eggs quicker, but heritage birds are a good fit for both meat and eggs.

Woeppel raises heritage barred rocks and other breeds and one year hatched between 4,000-5,000 chicks, shipping them from Maine to Alaska. He no longer hatches chicks; shipping was a problem, and he has a ranch to attend to.

He and his family, which includes wife Ann and kids Devyn, Claire, Rose and Judd, call their chicken business the XW Poultry Ranch. Last year, Claire and Rose won second and third places at the Nebraska State Fair in showmanship.

He loves the barred rock chickens.

“You open the door (to the coop) and there’s this heritage bird looking at you, with so many generations of bloodlines that have stayed true.

“They are self-sufficient, they get down to business and they go out and graze. They’re enjoying life. And I can get my own eggs and meat and I know what’s been put into it and what I get out of it.” 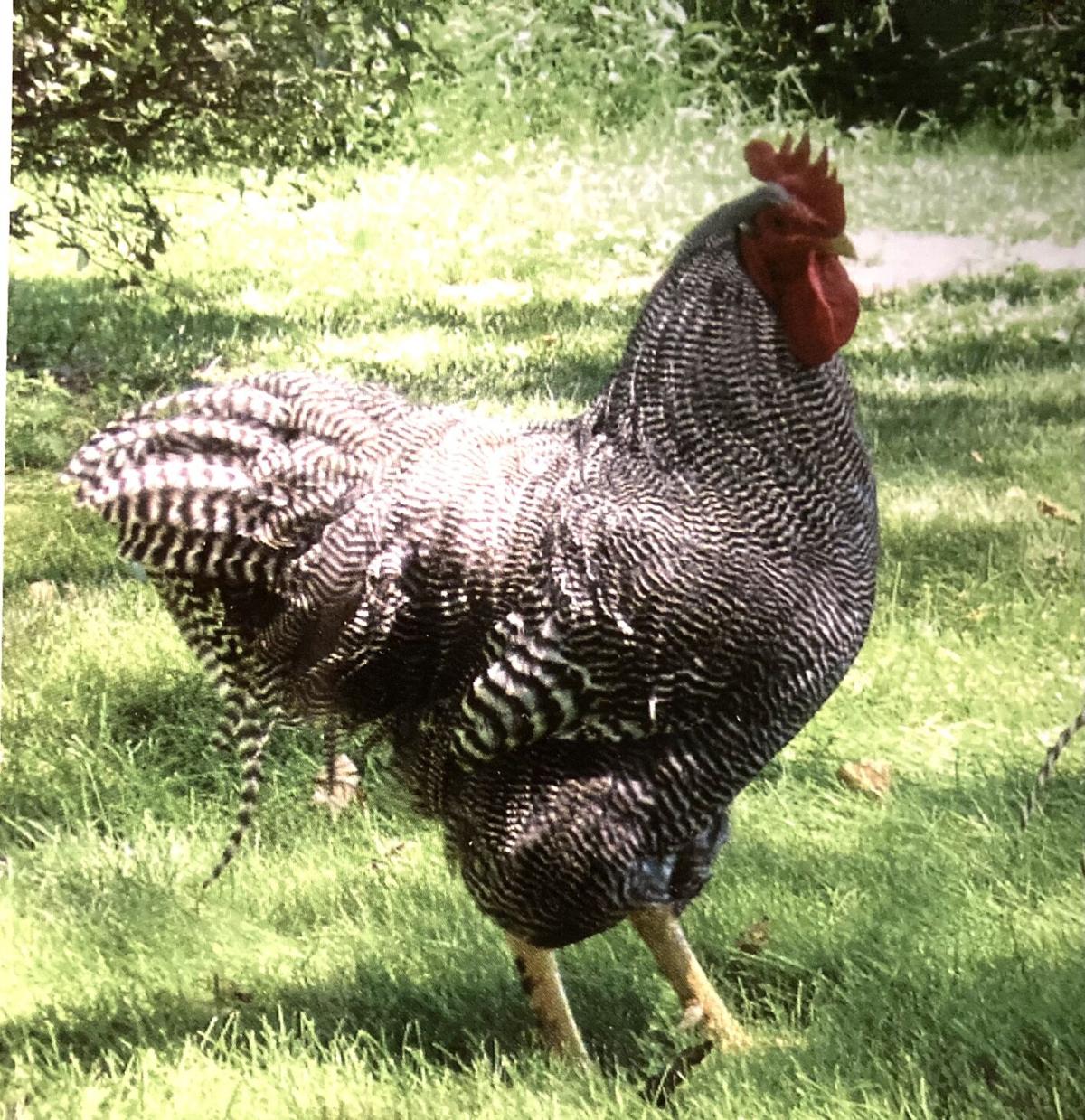 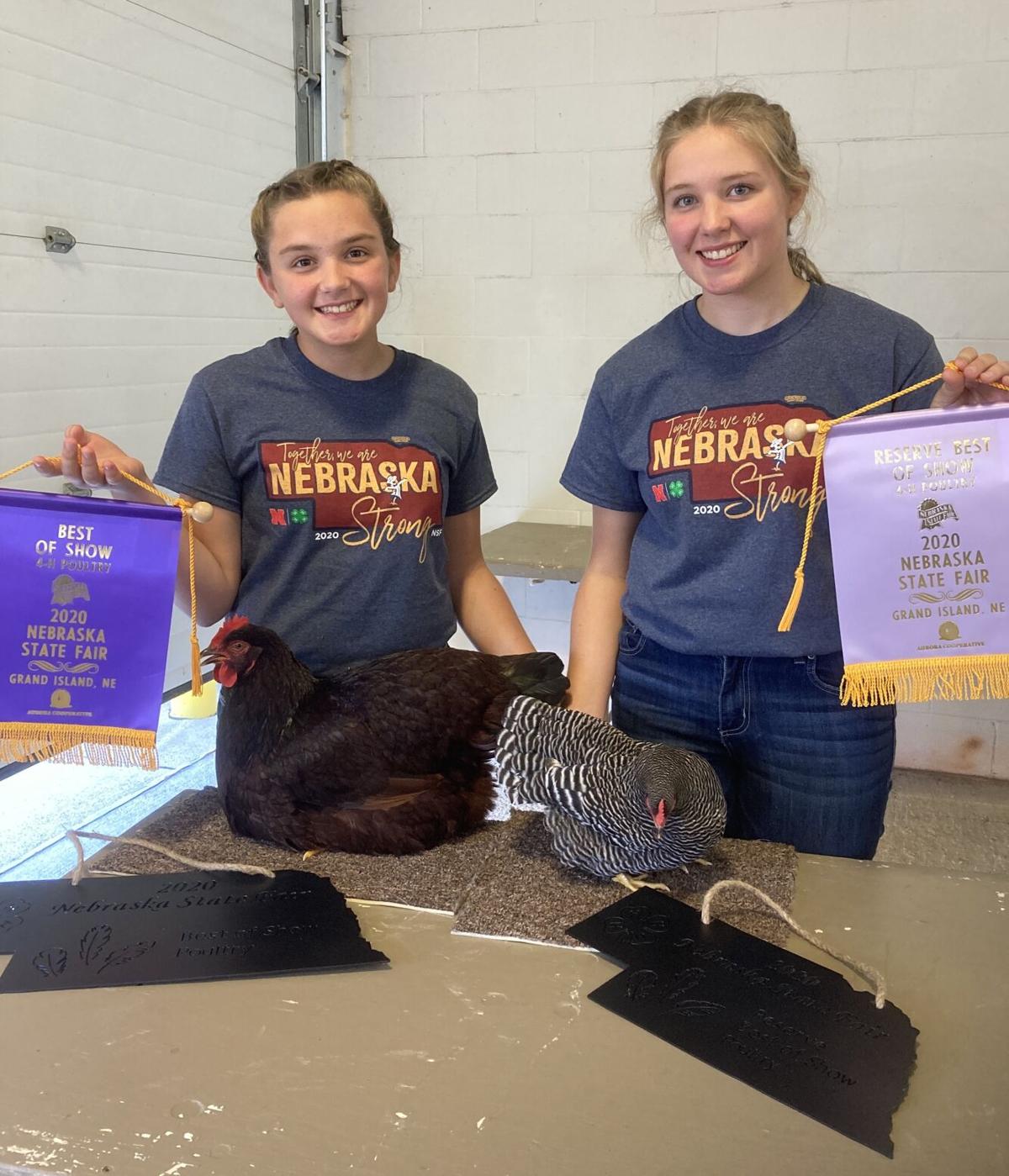 Rose and Claire Woeppel show their chickens at the 2020 Nebraska State Fair. Rose (on the left, with the Rhode Island Red), won best in show; Claire (with the Barred Rock bantam) won reserve in show. 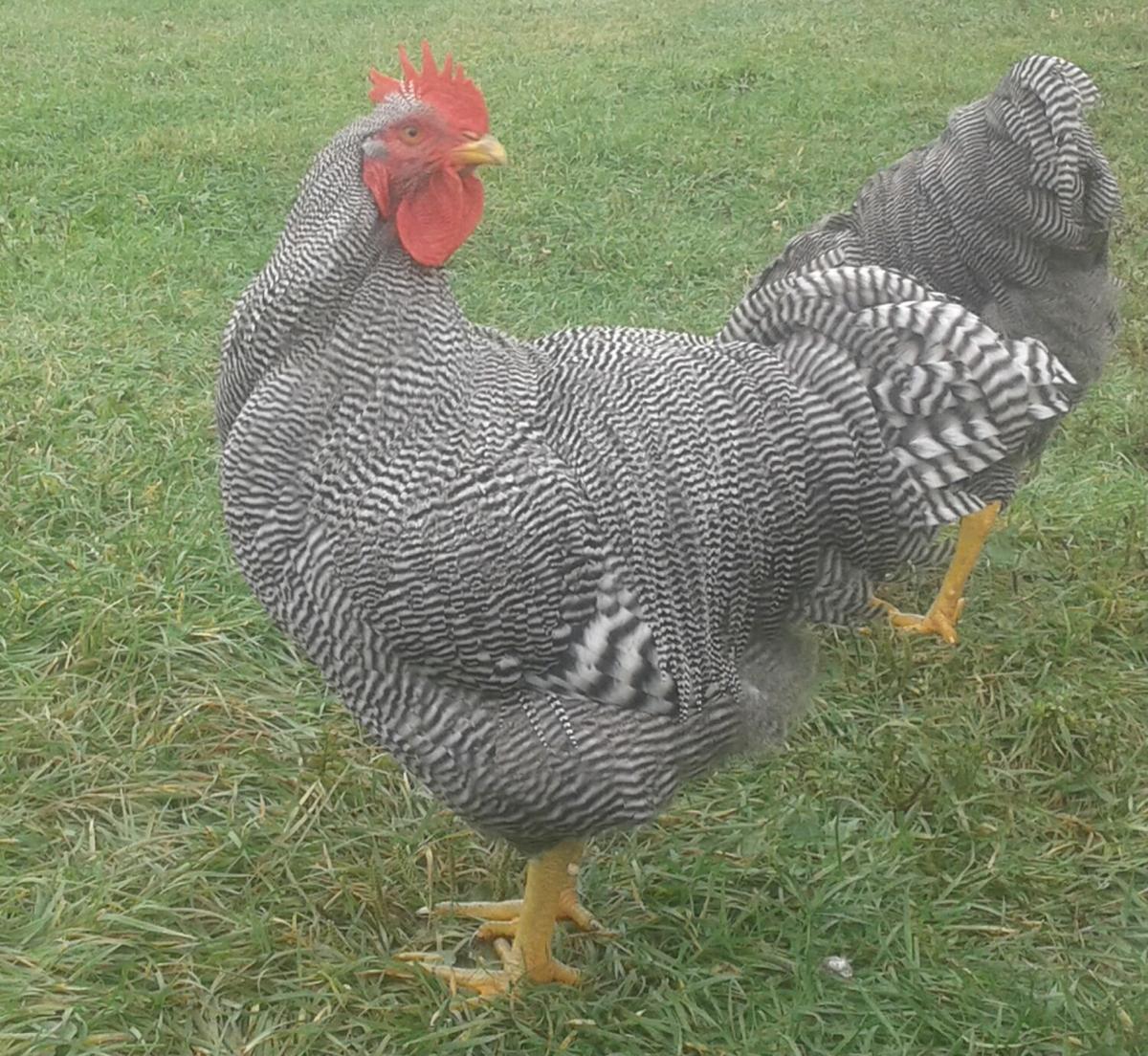 Barred rock chickens are a variety of Plymouth rocks. Their name comes from the “bars” or “zebra stripes” on their feathering.