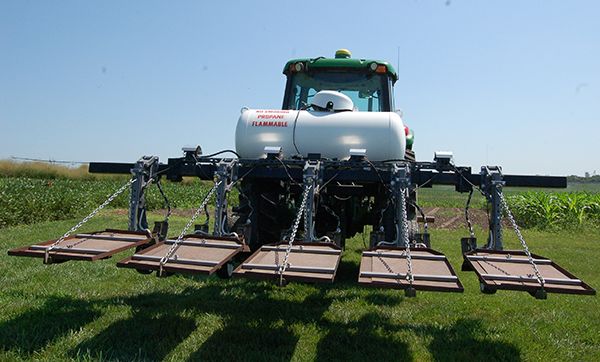 The prototype 8-torch flame weeding apparatus used at the ENREC for the workshop. 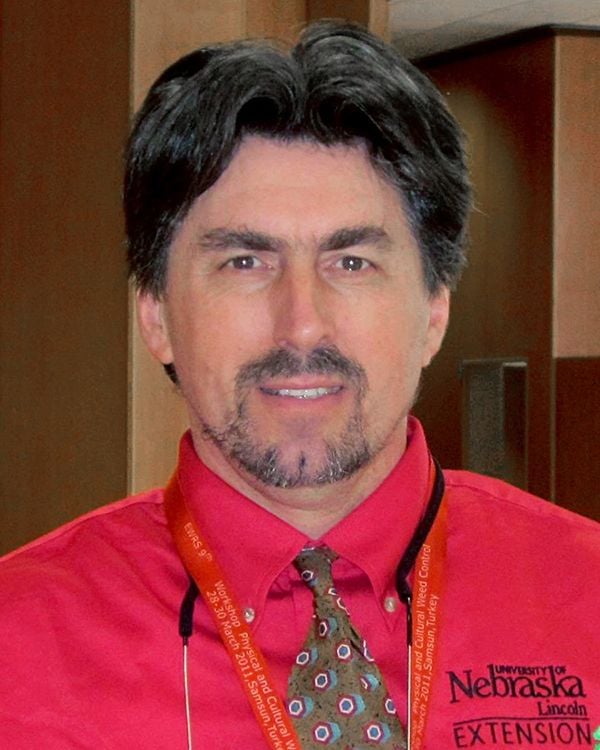 The prototype 8-torch flame weeding apparatus used at the ENREC for the workshop.

After seven years of research, scientists from the University of Nebraska-Lincoln are ready to light up Nebraska agriculture with a new weeding innovation.

This team, headed by Dr. Stevan Knezevic, professor of integrated weed management, and George Gogos, professor of mechanical and materials engineering, presented their findings on the application of heat as a means of weed management in agriculture at a workshop Aug. 19, at the Eastern Nebraska Research and Extension Center in Ithaca, Neb.

It was this pairing of weed science with combustion engineering that led to success where others have failed.

“Flame weeding sounds as if it means burning plants,” Knezevic said. “But, the idea isn’t to burn plants. It is to heat them.”

Propane-fueled flame weeding systems do not set fire to plants, he said. The heat rapidly raises the internal temperature of plant cells. The water in the cells expands and the cell walls burst.

“It is like getting a cut on your hand,” Knezevic told attendees. “You bleed. Plants bleed water.”

This release of water quickly dries out the plant tissue. Water loss and other heat-related changes kill or seriously damage the plant, he said.

“It is like surgery,” Gogos said. “The goal is to remove the malignancy without damaging the surrounding tissue.”

Propane flame jets produce a heat source that is three to four feet long. As the jets move down the rows, this will expose weeds to a temperature of about 700 degrees F for approximately 0.1 seconds. This is lethal to most plants.

“During non-selective treatments, everything in the treatment path — both weeds and crops — is fully exposed to heat,” he said.

Non-selective treatments are effective for controlling seedlings of early emerging weeds. It’s best used before the crop plants emerge or when grassy-type crops (corn, sorghum) are young and still able to recover from any treatment damage.

Selective treatments are done after the crop has emerged with the crop protected by a metal shield between the flame and crop row.

“Selective flame weeding treatments aim to treat the weeds while minimizing injury to the crop plants,” Knezevic said. “This is usually done by positioning the torches or using hoods to direct the heat away from the crop plants.”

Flaming is a very versatile tool, having applications in a large number of agronomic and horticultural crops. It also has several uses outside agriculture — for example, weed control on the concrete surfaces in urban areas. Knezevic said it has been used extensively in California in organic garlic fields, and in Sweden and Denmark on organic farms. It is currently being used in orchards and vineyards. Hops growers are still experimenting with it, he added.

The scientists discovered there were stages of crop development that were less conducive to beneficial outcomes. One key take-away was that using heat on VU and V1 to V3 soybeans was “the kiss of death.” Another was that corn is much heartier and difficult to kill with heat.

“We found that flame weeding works best when weeds are small — three inches or less,” Knezevic said. “We also found that broadleaf weeds were more susceptible than grasses.”

Flame weeding is an increasingly attractive weed control method because it provides multiple advantages over chemical and mechanical weed management methods used in both conventional and organic farming operations. Compared with the use of chemical herbicides with conventional crop systems, flame weeding does not leave chemical residues in or on plants, soil, air or water.

A trio of farmers made a 400-mile trek to learn about flame weeding at the field day. Steve Redfearn, Wyatt Redfearn and Justin Donar from Cuba City, Wis., said finding viable information on the subject was difficult. So, when they heard about this workshop they headed west.

Two other long-distance attendees — Ken Tritz and his son, Brian — farm about 2,000 acres located west of Morris, Minn. They have been using flame weeding for about three years on navy beans, alfalfa and corn. To do so, they rigged their own 12-row flame apparatus from a cultivator. Through trial and error, they have been moderately successful, they said. Equipped with the information from the workshop, they plan to improve their operation and even expand into soybeans.

Joe Noecker of Hartington, Neb., was also in attendance, hoping to learn to use flame weeding on his fields of corn, soybeans and alfalfa.

“The biggest hurdle to employing flame weeding equipment is financing,” Tritz said. “Banks don’t like to back new ideas.”

The areas of concern were the small equipment size presently available, the risk of injury to crops if improperly used, and the potential of fire if crop residue was thick.

“AFI has addressed the issues with flaming through the key innovations of hood technology (patent pending), efficient vaporizer/torch unit (patent pending), an ignition and flame detection system (patent pending) and treatment recipes for individual crops (patent pending),” Nissen said. “As a result, using AFI flame weeders can increase crop revenue by as much as $450 per acre through increased yields as compared to revenues and yields obtained through cultivation alone.”

Flame weeding can reliably control weeds within the crop row, making it an excellent complement to mechanical cultivation. Adding flaming to existing cultivation methods can eliminate the need for hand weeding, which can lower operating costs for the farmer. Hand weeding can cost $100 per acre; flaming costs about $10 per acre.

Even more important, flame weeding can, through improved control of weeds growing within the crop row, increase yields up to 25-30 percent compared to yields obtained through cultivation alone.

Two flames per season was recommended. A broad flaming at pre-emergence and a middle flaming when the crops were in the right stage. Since some weeds don’t appear until later in the growing season a second flame would be necessary.

“Heat does not transfer through the soil profile,” Knezevic said. “A pre-emergence flame will not kill seeds.”

But, the professor states, flame weeding isn’t a “silver bullet.” It is another tool in the toolbox, he said.

“Propane-fueled flame weeding is a promising tool for weed control in agriculture,” Knezevic added. “These researched guidelines for its most effective use will help make fields easier to manage.”