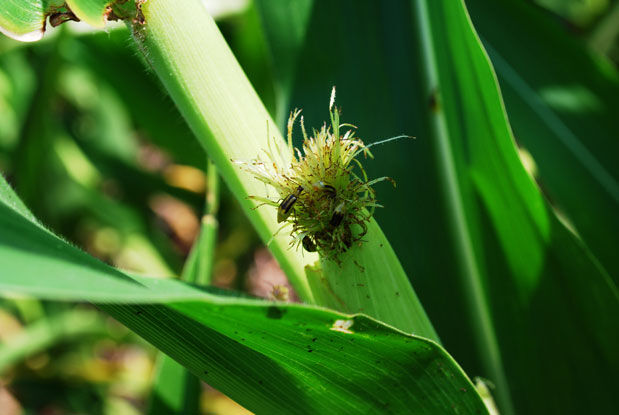 Rootworm beetles feed on corn silk. A mild winter, coupled with the normal rootworm cycle has made 2020 a challenging year for corn rootworm. 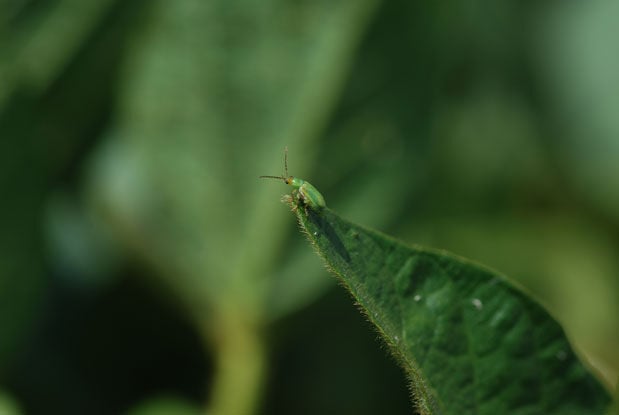 A corn rootworm beetle perches on a leaf. Rotating away from corn and controlling volunteer corn can help curb populations in coming seasons.

Rootworm beetles feed on corn silk. A mild winter, coupled with the normal rootworm cycle has made 2020 a challenging year for corn rootworm.

A corn rootworm beetle perches on a leaf. Rotating away from corn and controlling volunteer corn can help curb populations in coming seasons.

After a fairly mild winter by Midwestern standards, corn rootworm – the most notorious and common corn pest in the corn belt – has been spotted in many fields across the prairie.

That this year has been the perfect storm for a major corn rootworm cycle to come through the area, Syngenta agronomist Wally West said. According to his anecdotal data, the last major rootworm problem came in 2012, and typically, the pest follows a six- to 10-year cycle of activity.

“In our part of the world, they tend to pop up in 8-10 year cycles, even 6-10 years,” said the southeastern South Dakota-based agrnomist.

Due to the mild winter, which helped the eggs survive, and the fact that this year fit perfectly into the cycle, West urges producers to make sure rootworm isn’t becoming a problem.

Many producers have shifted to corn-on-corn acres instead of a corn-soybean rotation due to increased demand for corn silage and a decreased demand for soybean feed. That’s added to the rootworm issue by giving the pests a constant host plant.

Typically, corn-soybean rotations eliminate most major infestations as the corn rootworms never have a chance to breed. But, even in fields that were forced into prevent plant in 2019, corn rootworm eggs took hold.

Controlling the pest is fairly straight forward, as there is data back to the 1940s on how to fight the emergence of the worm. Typically, a standard rotation will eliminate heavy pressure, but West said that should producers need to plant corn-on-corn, selecting a hybrid specifically designed to ward off rootworms would be the best course.

However, even with the right hybrid producers may run into a problem on neighboring fields. Rootworms travel up to a mile to lay their eggs before the winter. On top of that, many producers who leave volunteer corn in a soybean field have found increased pressure the next year due to the rootworms holding onto the few stalks available.

While it may be too late to control the pest this year, West advised producers to be aware of the risk of rootworm returning next year, even if it’s off cycle.

“If you find beetles this year, you need to plan ahead for rootworm pressure next year,” he said.

For those who planted a bit later in the season, West said a quick insecticide application could help, as corn is an important stage of growth throughout August.

“This is a pest you really need to plan ahead for,” he said.

Corn rootworm was discovered almost 70 years ago but remains a common pest to this day. While techniques developed in the 1970s and 80s remain the most viable way of dealing with the best – hybrid selection and insecticide – West said there is no need to panic about rootworms evolving or developing a resistance just yet.

“There is nothing to push the panic button right now,” he said.