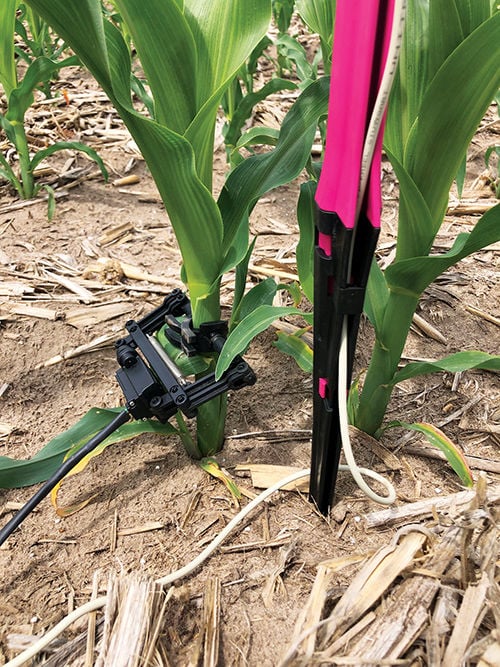 Sensors are placed in a corn field when the crop is 12 to 18 inches tall. It can monitor stress from water shortage or pests throughout the season. 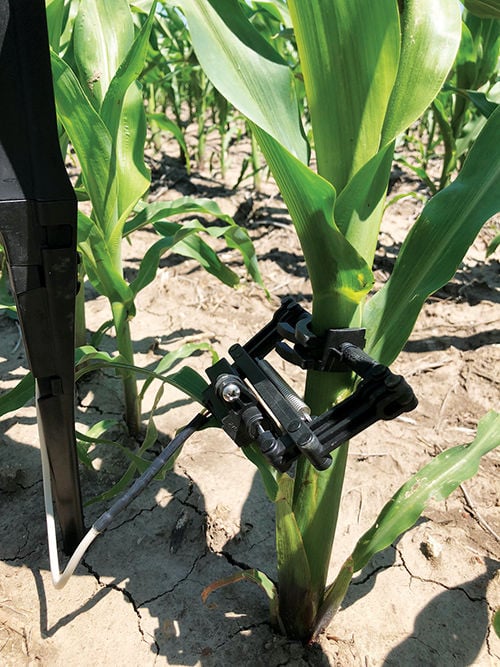 Like a Fitbit for corn, sensors on the corn stalk can tell how stressed the plant is based on swelling and shrinkage.

Sensors are placed in a corn field when the crop is 12 to 18 inches tall. It can monitor stress from water shortage or pests throughout the season.

Like a Fitbit for corn, sensors on the corn stalk can tell how stressed the plant is based on swelling and shrinkage.

Farming can feel like a crapshoot with so many factors that producers can’t control. There’s a company in Nebraska trying to take a little bit of the guesswork out of farming. Phytech connects farmers directly to every plant in their fields. The goal is to provide more certainty in decision making, reduce risk and boost harvest results.

“Phytech is a company that was born in Israel,” said Sam Moffat, Midwest Operations Manager for Phytech. “Our current CEO (Sarig Duek) took over nine years ago when we were only in Israel. At that time, we were placing sensors on plants that sent farmers information a few times a day on plant conditions. He started experimenting with different algorithms to help farmers understand what they were seeing on data readouts.

“He also started experimenting with the sensors on different types of crops,” he added. “Eventually, Phytech came to the U.S., expanding first into California, where we have a big presence in the Central Valley. We’re also focused on expanding into the Midwest quite a bit.”

The sensors they use in California are called Dendrometers and they’re attached to tree trunks. They’re very sensitive and able to measure objects that are less than the size of a human hair. “They’re able to detect water shrinkage or swelling in the trunks of a walnut or pistachio tree,” he said. “If they can do that in plants as large as trees, they’re even more accurate in smaller plants like corn stalks.”

Three years ago, Phytech implemented wireless systems into their sensors as they expanded into the Midwest. The tree sensors in California used to be hooked up to 30-meter wires that carried information. The sensors on corn and soybean plants each have their own radio units that communicate inside the field with a data logger, which is mounted on the closest center points.

“The sensors take measurements of the plant stalks every hour,” Moffat said. “Based on the shrinking and swelling in that stalk, we can tell each grower just how stressed his plants are in that part of the field. Some people have called this a ‘Fitbit’ for corn. It’s literally the pulse of your plant in the palm of your hand.”

The sensors mainly detect water stress, but he says they’ve also detected bug stress as well. The sensors have an advantage over soil probes that many farmers use these days. “The sensors can give you a complete picture of how your crop feels,” Moffatt said, “whereas the soil probe is only monitoring the medium that the crop is growing in.”

“The plant will tell you the full story,” he added. “It knows how wet the dirt is and how much additional moisture it can take up. That’s why we’re on the stalk of the plant. All the water and nutrients that plant needs will flow through that stalk.”

The sensors can go onto soybeans when they’re a quarter-inch thick. Phytech usually waits until the corn is between 12-18 inches tall to attach the sensors. Any maintenance on the sensors is done at no cost to the grower. Phytech installs, maintains and then removes the sensors before harvest.

“The sensors can go in multiple parts of each field, based on what package a farmer buys from us,” he said. “We usually like to have them put one sensor in a good spot in a field, and then we recommend putting a sensor in a spot they usually have trouble with. We do have an agronomist that’ll sit down with them to help choose optimum sensor spots. However, at the end of the day, the customer gets to choose where they place the sensors.”

The sensors and the data logger on a pivot have to stay within a certain range to be effective. “Our base package has a total of nine different sensors out there,” Moffat said. “The data logger will be in the center. You get two locations in opposite quadrants. Each of those locations has three plant sensors and we also give you a soil moisture probe.

“After the logger takes in 24 hours of data from the sensors, the logger will send a signal to the farmer’s phone or computer at six in the morning,” he said. “Farmers will get a current picture of their field, as well as four days in advance with Phytech’s projection tool. Phytech takes into account how your crop feels now, how it has behaved over the last couple weeks, what growth stage it is in, future climate projections in your area (NOAA) and upcoming rain events. From all of this data we can predict how stressed (what color) the crop will be in the coming days.

They don’t share data with anyone else. The one exception to that rule is the Natural Resources Conservation Service. If growers have cost-share contracts with the NRCS, then Phytech is required to send in data from each field at the end of each season.

“You can look at colors out in the fields and make daily decisions,” he added. “Or, you can do a serious deep-dive on irrigation. At the end of the season, you can look back and see where you did well and what you can do better with next year’s irrigation.