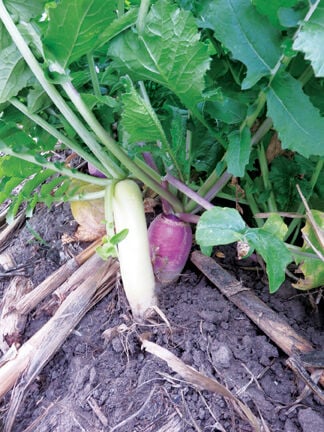 Brassicas, such as radish and turnips, can be planted as a cover crop up until Sept. 1, experts say. When used for grazing, livestock can get a boost in gain. 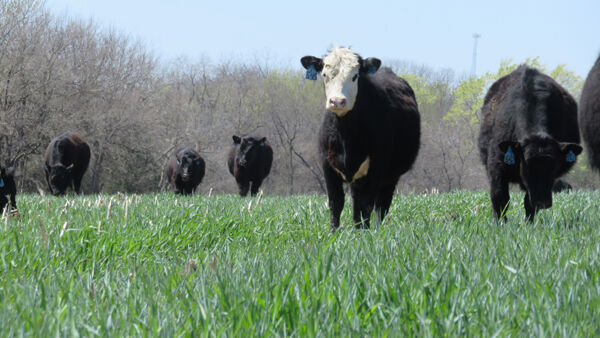 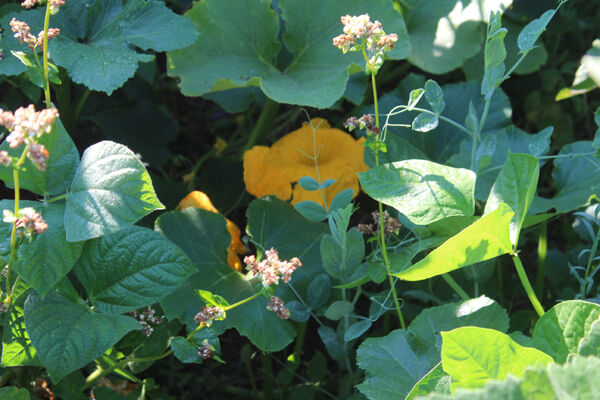 The concept of using cover crops to improve soil health and productivity is nothing new.

Ancient civilizations used the concept to enhance the growth of their food crops. Even George Washington realized the value of cover crops and promoted the use of “crops grown to replenish the soil.” According to a 2015 article by the Mt. Vernon Ladies Association, his favorite mix was clover, grass and buckwheat.

Cover crops favored in the 21st century are different again as producers tailor them to their forage and soil improvement goals.

Jenny Rees, University of Nebraska-Lincoln Extension educator for York and Seward counties, has been conducting on-farm research with cover crops since 2009.

“The first cover crops were major mixes that included seven to 11 types of seed. Some of that was because I was in areas of non-irrigated land where they were putting on cover crop right after wheat harvest in cattle country,” Rees said.

That has evolved to more specialized mixes in the last 10 years, she said. In one of her first studies, the farmer she was working with was trying to help improve his organic matter and trying to mellow his soil.

Cover crops can provide food for people, too

One of the newest twists in cover crops occurred because of COVID-19.

“The next year he could see the difference in his test strips,” she said.

The last two years Rees has been doing some interseeding studies with cover crop mixes planted into four- and six-leaf corn.

“Last year we didn’t see any yield differences, but also didn’t have the biomass left if we wanted cattle to graze it. So we increased the seeding rates, planted at four-leaf, and this year he has tremendous growth,” she said.

She has 11 different interseeding projects, six of which are on-farm research, in a collaboration with the Nature Conservancy, Upper Big Blue Natural Resources District, Nebraska Extension and farmers.

“This year we had tremendous growth in some of these studies,” she said. “We had cowpeas climbing up to the tops of the tassels, also some mini pumpkins.”

The studies are teach them what species to use, what grows and what doesn’t, as well as what grows through different herbicides.

Planting direction and plant population, such as 26,000 versus 30,000 plants, can also impact cover crop biomass, she said. They are also looking at how many drill units between the rows to see which produces more biomass.

But perhaps the most important thing is growers need to be thinking a year out on cover crops regarding any herbicide restrictions, Rees noted, especially if they plan to graze the covers, as there are restrictions based on the labels.

She described a long-term study that will span seven years in Nuckolls and Webster counties where growers are looking at a systems approach. It starts with wheat, a cover crop planted after wheat harvest, then grazing, planting corn, grazing corn stubble, then planting soybeans.

“The question is in a dryland system how much moisture and yield are you giving up by having the cover crop before the corn?” she said. “Does the economics of grazing the cattle offset that?”

“Biomass is less with a cool season mix and is not as economical, but the warm season cover crop is more economical under this study because we just don’t have the biomass,” she said. “Every year is different, which is why we are doing this study long-term.”

Ultimately, the best or easiest places to insert a cover crop are after wheat harvest, seed corn or silage crops. This allows the cover time to get established and have good growth before winter.

By planting after harvest, the biggest benefits are for weed management and erosion control, especially after soybeans. But there often isn’t a yield increase in the first year, Rees said.

“I just tell people to stay with it and don’t give up, as we usually see a yield increase by year three,” she said.

The cover crop mixes used in grazing rotations have also evolved in recent years, noted Mary Drewnoski, a beef systems specialist with the University of Nebraska-Lincoln. She has worked on integrated crop-livestock management including a lot of work with corn residue and cover crops.

The biggest challenge in using cover crops for forage, she said, is the need for biomass.

Wheat and other small cereal grains give growers a huge window to seed cover crops after grain harvest, she said.

“If you plant in early to the end of July, you can plant warm-season species such as sorghum Sudan or pearl millet and get 4 tons an acre pretty easily,” Drewnoski said.

Some producers want to make silage while others want to harvest their cover crop as hay, she noted. Sorghum Sudan is good for silage, but it takes time, she said.

“Warm season mixes give you big yields and that works well for cows, but not so good for calves,” Drewnoski said.

If a producer is able to plant between Aug. 1 and 15, cool season covers such as oats typically yield 1 to 2 tons. Sometimes they can produce up to 3 tons per acre for high quality feed, notes the beef specialist.

“This fits well with fall calving cows as they can graze through early December while still maintaining quality,” she said. “You can also use this mix with weaned calves and they can get one to two pounds of gain.”

If providing forage is a goal, she advises producers to make sure they have enough grass in the mix. For growing calves in the fall and winter, adding a brassica can get a boost in gain, she said. One she recommends is rape seed, which has a tap root to help with compaction, and it’s cheaper than purple-topped turnip seed.

In most areas of Nebraska, producers can plant oats and brassicas until Sept. 1. After that, growing degree days get short and growers should consider something winter hardy.

Both Drewnoski and Rees noted the most common cover crop is cereal rye. It’s lower cost, but wheat is another option.

“What rye does that wheat doesn’t is it comes on earlier in the spring,” Drewnoski said. “Northern ryes graze about one to two weeks earlier than wheat.”

If the plan is to harvest the cover crop as silage, rye will come two weeks ahead of wheat, on average, she said. The disadvantage is it gets to maturity quickly.

“Your window is narrow to harvest and get the next crop in,” she said.

Other producers have used wheat, rye, winter barley or triticale mixes because all grow at different rates. That spreads out the grazing season, she said. Those areas also make a great place to calve or use for lactating cows because they provide clean ground, she added.

The biggest challenge in compiling mixes is the cost versus benefit, Drewnoski said.

“Some add legumes for protein, but those seeds add to the cost. Management of grasses will yield enough protein relative to the cost in most cases,” she said.

While both researchers note visiting with neighbors is good for learning about others successes and failures, producers should not feel obligated to do what everybody else is doing. It may not be the best option for them.

Keith Berns, who founded Green Cover Seeds at Bladen, Nebraska in 2009, said the cost of cover crop seed varies per acre depending on what mix a producer chooses.

“Mostly cereal based with few legumes go for around $15 an acre, and those with a little bit of legumes and brassicas for the low $20s. Adding more legumes will cost $25-30 an acre, organic customers can expect to pay $50-60 to push nitrogen,” he said.