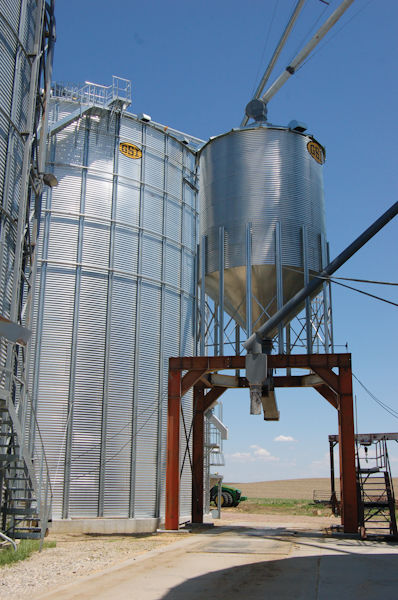 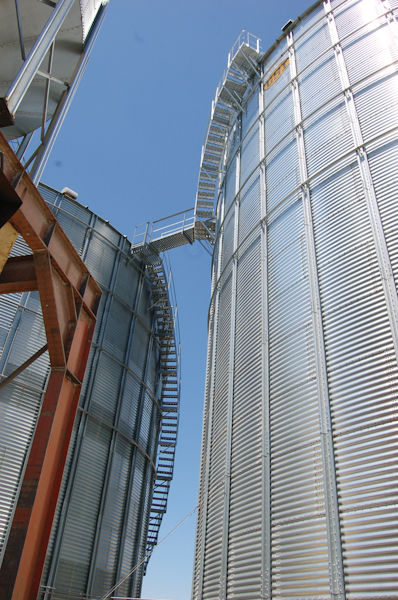 Petersen AG Systems installed a crosswalk between Greg Owens’ new GSI bin and an older bin. That way he wouldn’t have to descend one bin and then climb all the way back up the other. 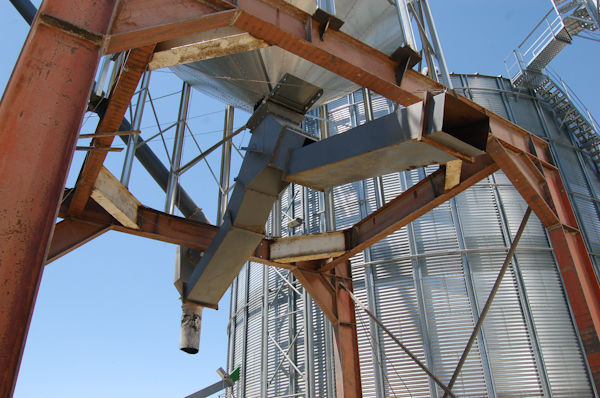 Greg Owens of Wayne County in Nebraska was looking for improvements for the power sweep situation in his bins. His current system wasn’t working as well as he would like handling the half million bushels of corn he brought in annually.

They suggested he install a new GSI grain bin. The new 150,000-bushel bin would expand Owens’ operation, and provide the improvements he sought.

“Petersen AG was friendly to work with and did a fine job,” Owens said.

Not only did they install a new storage bin, they helped Owens with a new 2,600 bushel overhead bin that would speed his truck loading with dual wide-spouts. Prior to that, corn had to be brought up from the storage bin and then loaded into the truck from a single spout. This meant the driver had to shift position of the truck to ensure even distribution of the load.

The GSI bin features a larger sweep diameter, just the same as Owens’ previous bin, he said. This larger diameter increased the capacity for unloading. The GSI system is also more robust, he said.

In addition to the sweep improvements, Owens had Petersen hook up a new AgriDry Bullseye Monitor. This moisture sensor can turn the fans on automatically. This will improve grain quality, Owens said. He especially likes that everything is automatic.

Petersen built the new bin next to an existing bin on Owens’ farm. To make working on them easier, Owens had the company connect the two bins’ stairways by an innovative short walkway. That way no one needs to climb down from one bin just to ascend the other.

“I had a little trouble with the overhead bin I first installed,” Owens said. “Petersen AG came out within 24 hours and had it fixed. They did a good job.”