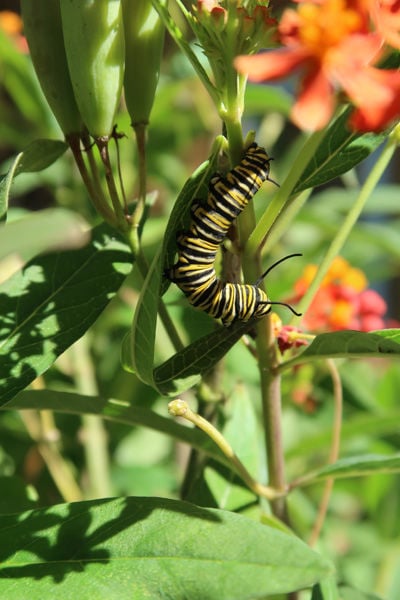 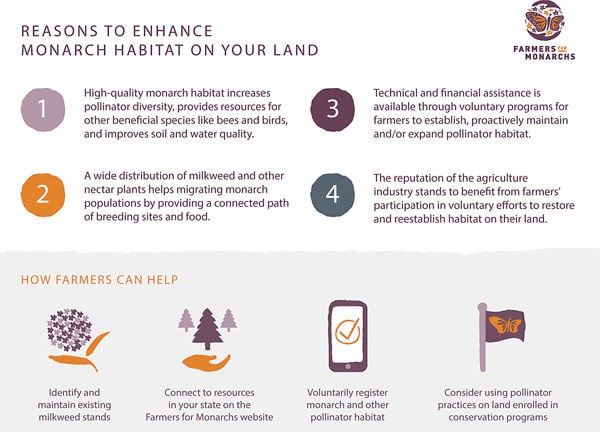 A coordinated effort is underway to help the monarch butterfly stave off being listed as an endangered species.

According to the Western Association of Fish and Wildlife Agencies’ Western Monarch Working Group, since 1997, both western and eastern populations of the monarch butterfly have shown significant declines.

Based on information provided in 2014, the U.S. Fish and Wildlife Service determined that there was substantive information to list the monarch butterfly as threatened under the Endangered Species Act.

This has led to Farmers for Monarchs, an initiative of the Keystone Monarch Collaborative. The collaborative consists of farmers, ranchers and land owners working with national organizations such as American Farm Bureau Federation, American Soybean Association, Bayer Crop Science and Corteva Agriscience, among many others.

These stewards of the land are working diligently to re-establish habitat for monarchs as they make their annual thousand-mile migration across the United States from Mexico. According to the collaborative, monarch adults only lay their eggs on milkweed, and their caterpillars eat nothing but milkweed. The loss of milkweed along the monarch migration route reduces the resilience of the monarch population, they stated.

To counter this loss, landowners along the route are being encouraged to set aside areas where milkweed can propagate.

There are 20 different species of milkweed, Bachman said. Some are better than others for monarchs; some — like the aptly named butterfly milkweed — are preferred, she said.

Since milkweed is toxic to livestock, it is suggested that grazing areas and monarch habitat not overlap. But Farmers for Monarchs stated that monarch habitats benefit other pollinators and small animals, too.

Nectar sources are needed as well, Bachman said. The collaborative stated that once caterpillars have pupated and emerge as butterflies, their menu expands to a wide range of nectar-producing flowers that fuel their continent-spanning migration.

To facilitate these efforts, Bayer has teamed with The Climate Corporation and developed HabiTally.

“HabiTally is an app for Apple devices that collects data from landowners about monarch habitat,” Bachman said. “It is supported by Iowa State University.”

According to ISU, HabiTally is easy to use. Landowners drop a pin on a map to mark their habitat and enter any key characteristics of the habitat. Documentation provided by ISU states that HabiTally will automatically calculate the size of the habitat based on the user’s entry, as well as auto-populate information about the milkweed density. Users can also enter whether they have seen monarchs in their habitat.

The data is sent to ISU and kept anonymous to respect privacy. Users will be able to see a national account of efforts logged using the app. Currently, there are about 600 acres logged, Bachman said. Those working through the CRP or NRCS can overlap with the Farmers for Monarchs initiative, she said.

“The app is available on Apple store,” Bachman said. “They are developing an Android version.”