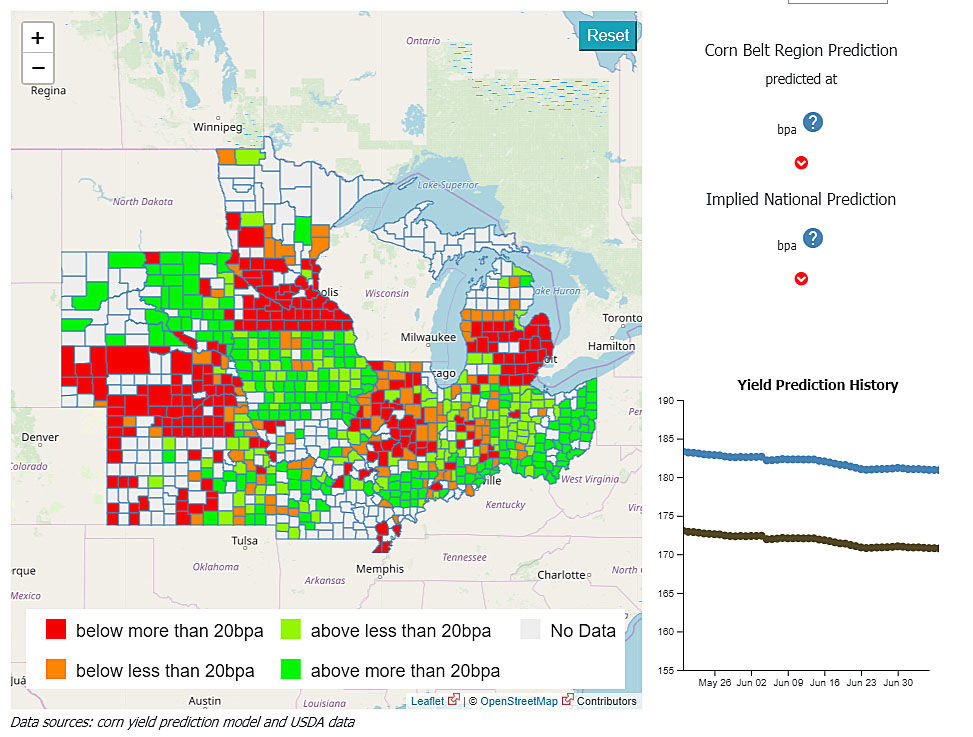 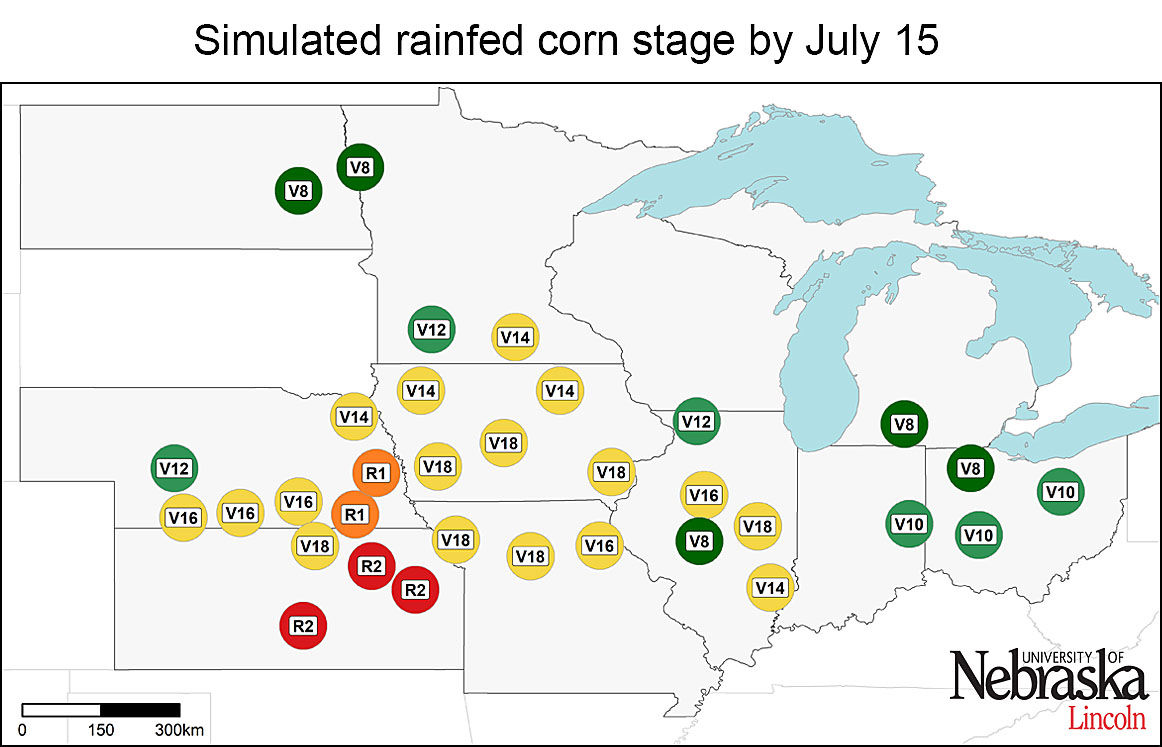 One of many graphs on corn yield predictions by UNL CropWatch

One of many graphs on corn yield predictions by UNL CropWatch

With the haphazard weather earlier in the season, Nebraska corn yield predictions are understandably lower than in previous years.

How much lower depends on where you look for answers. Yield predictions come from various sources. Their objectives and techniques differ.

The most optimistic estimate — 180.32 bushels per acre — comes from researchers at the Center for Agricultural and Rural Development at Iowa State University, who developed a new algorithm for corn yield predictions: the PSI-CARD Corn Yield Prediction Project. The online tool at www.card.iastate.edu/tools/yield-prediction/provides county-level predictions for Nebraska, as well as South Dakota, Kansas, Minnesota, Iowa, Missouri, Illinois, Michigan, Indiana and Ohio.

“Once we obtain the Corn Belt yield, we impute the daily national yield,” said Zehui Jiang, ISU economist. “The implicit assumption is that all the yields are adjusted by the same percentage change as the Corn Belt yields. For the national production, we simply multiply the imputed national yield with an estimate of harvested acreage imputed from the 2019 annual acreage report.”

Using weather patterns to judge the effects on crops, AccuWeather, Inc., out of State College, Penn., is predicting the least optimistic yield so far at 167 bushels per acre on 78 million acres harvested — the lowest since 2012.

“On the positive side, it’s a little bit of a blessing for the farmers who did plant since they might get a higher price for whatever they harvest,” said AccuWeather Senior Meteorologist Jason Nicholls. “The ones who were able to plant will do alright because they’re happy to see the price of corn go up.”

He believes it’s possible by the end of the summer that instead of the corn being priced at $4.30 or $4.40 as it is now, it might be closer to $5. Continued rain and flooding so far have marred the 2019 growing season, with many farmers forced to plant corn far later than usual.

Due to the unprecedented planting delays through June and likely prevent plant claims, the USDA shaved off 3 million corn acres, making the 2019 estimate 89.8 million acres. In addition, USDA lowered the national average corn yield to 166 bushels per acre — a 10-bushel-per-acre drop from its original estimate.

Each month, USDA National Agricultural Statistics Service publishes crop supply and demand estimates for the nation and the world. These estimates are used as benchmarks in world commodity markets because of their comprehensive nature, objectivity and timeliness.

For 2019 in Nebraska, NASS expects to summarize 500 to 1,000 AYS monthly. For the more intensive OY surveys in Nebraska, they typically sample more than 200 corn fields.

For the OY, two sampling locations in each of several hundred selected fields are visited monthly from late July through late October to produce the reports published from early August through early November.

According to UNL CropWatch — which uses research and computer models for its yield figures — simulations of 2019 end-of-season corn yield potential and real-time crop stage were performed on July 19, for 37 locations across the U.S. Corn Belt. CropWatch utilizes the UNL Hybrid-Maize crop model in collaboration with faculty and extension educators from 10 universities.

“We use intricate and intensive field techniques and complex crop models to forecast yields weeks before combines are expected to roll,” said Roger Elmore, UNL Extension Cropping Systems agronomist. Elmore, along with Patricio Grassini, associate professor of agronomy and horticulture, are two of those responsible for compiling CropWatch corn yield estimates.

CropWatch states that forecasted yield potential is highly variable across rainfed sites. There is a high probability of above-average yield at sites in western and central Nebraska. Interestingly, at most sites, there is no clear indication that the late planting this year by itself set a high probability of low yield from the get-go. All locations are running behind last year’s corn development.

The report also said corn is still in vegetative stages throughout most of the region. Although it is still too early to make strong inferences about end-of-season yields for irrigated corn, they don’t see a high probability of lower yields due to late planting.

This can change depending upon temperature during the next four weeks, the authors claim. For rainfed corn, the scenario is diverse across regions, with above-average yields in the western fringe of the region. Temperature and rainfall during the rest of July and early August will likely determine the trend for the other rainfed sites.

Another contributor of the report, Jose Andrade, UNL research assistant professor of agronomy and horticulture, reminded producers that it is important to keep in mind that yield forecasts are not field specific and, instead, represent an estimate of average on-farm yield for a given location and surrounding area in absence of the yield-reducing factors mentioned here.

Likewise, crop stages and forecasted yields will deviate from the ones reported here in fields with planting dates or hybrid maturities that differ markedly from those used as the basis for the forecasts.

CropWatch will follow up with further forecasts in early August. Watch for updates at https://cropwatch.unl.edu/tags/corn-yield-forecasts.

Based in Cedar Falls, Iowa, the Professional Farmers of America hosts the Pro Farmer Midwest Crop Tour, which will offer a detailed map showing its yield predictions beginning August.

They gather their information from more than 100 “scouts” — farmers, media, agribusiness and Pro Farmer staff — organized into teams that fan across 20 pre-determined Midwest routes. The western leg begins in southern South Dakota, moving across eastern Nebraska, western Iowa and into southern Minnesota.

Teams pull onto rural side roads every 15-20 miles from their primary route and stop at survey locations that meet the following criteria: Safe parking available on a wide shoulder or field driveway; accessible corn fields that are not fenced or posted; and no structures such as homes, machine sheds, grain bins or livestock buildings.

Pro Farmer Midwest Crop Tour sampling and measurements are designed to get representative results for crop districts, states and the entire Midwest — not individual fields or counties. Scouts measure three ears of corn from just one location in each field surveyed. Last year in Nebraska, they sampled 301 corn fields.

Go to https://www.profarmer.com/crop-tour for 2019 yield predictions next month.