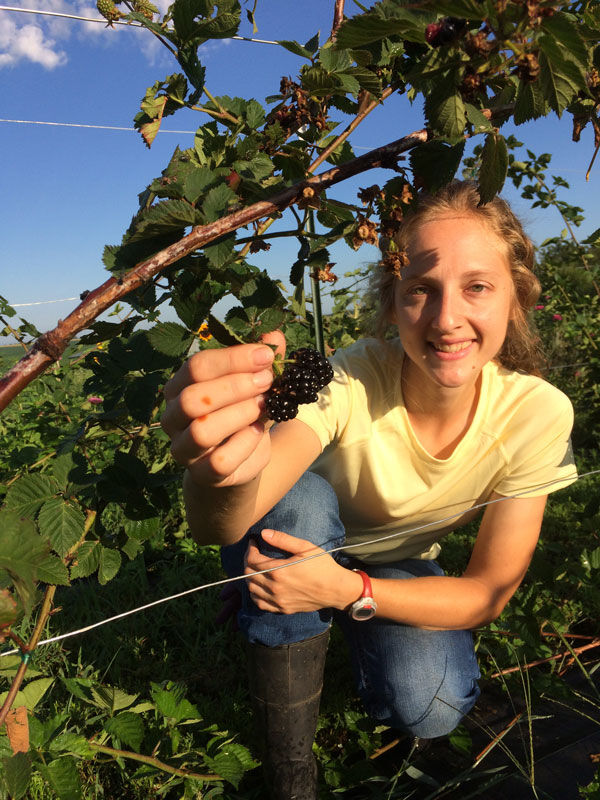 Nebraska grower Katie Jantzen has discovered a few tricks to operating a successful berry operation in the Midwest. 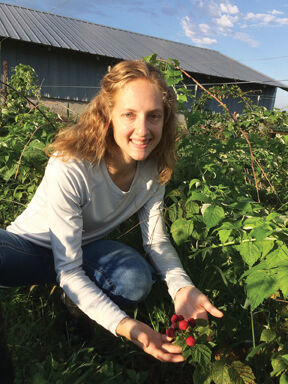 Keeping her blackberries and raspberries safe from rabbits has been a particular challenge, but with improved trellising and pruning this year, Katie Jantzen is hopeful for a bountiful harvest next year. 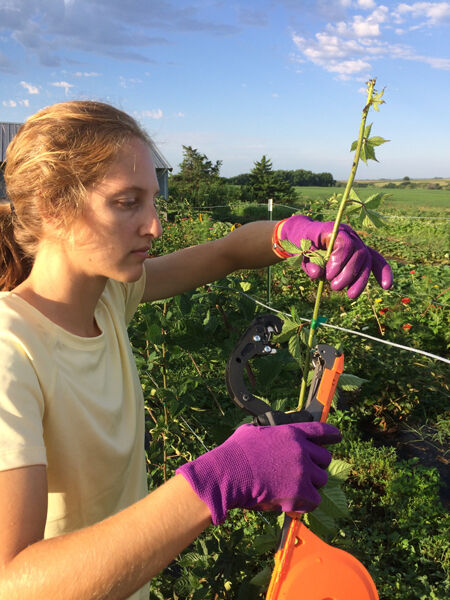 Katie Jantzen, owner of West End Farm in Plymouth, Nebraska, attaches one of her blackberry plants to a trellis.

Tripling its total industry revenue in just five years, berries — though still a niche crop — have become a lucrative business for some Nebraska growers. And it’s a market that’s primed for expansion.

The small scale of competing growers is only one factor lending to their success, though. Kreuser credited a hefty part of the berry crazy to consumers’ desire to harvest their own berry crop — making Nebraska’s U-pick operations stand out during the height of berry season when large producers are filling grocery stores to the rafters.

In Nebraska, raspberries and blackberries currently dominate the berry market in terms of production. Aronia berries are still popular — despite a tapering in production since the aronia berry boom a few years ago.

Kreuser and one of her counterparts, Lincoln-Logan-McPherson County Extension educator David Lott, agreed that on both sides of the state, not many growers are venturing into strawberries right now. It could be the climate, Kreuser reasoned. With ever-more dramatic temperature increases in June, ever-bearing strawberries don’t always have a bountiful second harvest in Nebraska as they typically should. But, she said, June-bearing strawberries grow well here in neutral PH, well-drained soils, especially in the eastern growing zones.

A successful strawberry grower, Katie Jantzen, owner of West End Farm in Plymouth, Nebraska, suspects the strawberry situation has more to do with labor.

“They don’t require much work for most of the year, and then for a three- or four-week window, they require a huge amount of labor to harvest on a daily, or every other day, basis,” Jantzen said. “It’s hard to hire labor to fit that schedule.”

Jantzen has carefully tailored her small scale berry operation to fit within this and numerous other constraints — weather, pests and markets are all significant issues for Nebraska, she said.

The June-bearing strawberries are her largest berry crop, and she’s also grown black raspberries and thornless blackberries the past four years. Her market strategy involves priority sales to her Community Supported Agriculture accounts, then selling excess at the Beatrice farmers market and on her website. If there’s a decent amount of produce left after that, she offers it up to local wholesale outlets — caterers, schools, or individuals who like to preserve produce.

Though Jantzen doesn’t grow on contract due to her berry operation’s size, she said cooperatives like Lone Tree Foods in Lincoln are excellent platforms for small scale growers to find success in an industry where commercial operations provide stiff competition.

In western Nebraska, Lott is aware of numerous growers who team up to fulfill large contracts together, which has been another viable option for small-scale growers to overcome not only their yield constraints, but also location. Many grocery stores will buy local produce if the growers can fulfill the contract through multiple operations, easing the burden of transporting peak quality produce from far-flung farms.

Knowing where your market is and how you plan to get your produce to it is one of the most important factors in planning to grow a new specialty crop of any kind, Lott said. He advises research, research, and more research.

“It’s not like a row crop, where you grow it and take it to a local cooperative — these crops are going to specific markets,” he said. “You’re going to have to do your homework ahead on that.

“Produce has to be on a timeline for peak quality, and that can be a challenge.”

Berries can be picky, but not impossible. To grow a successful berry crop, there are numerou…

Just as important is planning your growing site — testing the soil, learning about correct planting techniques and maintenance — and choosing the right berry breeds for your region and operational preferences.

To provide the optimum product for her primary market — the direct-sales consumers — Jantzen selects her berry breeds for exceptional flavor. This tactic shortens her window on shelf life, but her customers don’t seem to mind the inconvenience.

“People who are searching for real berry flavor know you can only get it for a few weeks per year, and they’re willing to pay for it,” Jantzen said, adding their popularity with her customers is why she continues to grow berries alongside her vegetable operation, despite the challenges.

For her strawberries, Jantzen grows a June-bearing breed as perennials. Unlike most commercial producers, who plant an entirely new crop of strawberry plants every year — both financial and labor intensive — Jantzen is able to be more fiscally savvy, shelling out bucks only to replace those plants that died during the previous winter.

Jantzen also uses some of her berry crops each year to produce value-added goods such as jam for her farmers market booth, and sales on her website to boost the financially slower winter season.

After four years of growing berries, Jantzen makes it look easy, but it wasn’t always so. Despite her pest control methods, raccoons stole her first strawberry crop in 2016, and during the winter of 2017-28, rabbits chewed down her raspberry and blackberry canes. There’s some trial-and-error involved in growing any crop, but for berries, Jantzen echoed the importance of Lott’s words — do the homework.

“I think it’s worth it to take at least a year to do that research while also preparing the plot where they’re going to go — leveling, soil testing, amending, etc.,” Jantzen said.

Though growing berries can be intense, Kreuser said it’s a prime moment to delve into the industry, with CSA transactions exploding throughout the past several months of COVID-19 quarantine.

“A lot of (Extension educators) have seen that anybody who has a CSA has had to cut off registration, because they’re worried they wouldn’t be able to fill orders,” Kreuser said of the unexpected surge in demand. “When people ponder what life is going to be like after coronavirus, I hope they continue to value that shorter food chain and stick to supporting local. Developing those relationships with the farmers and supporting them is important.”