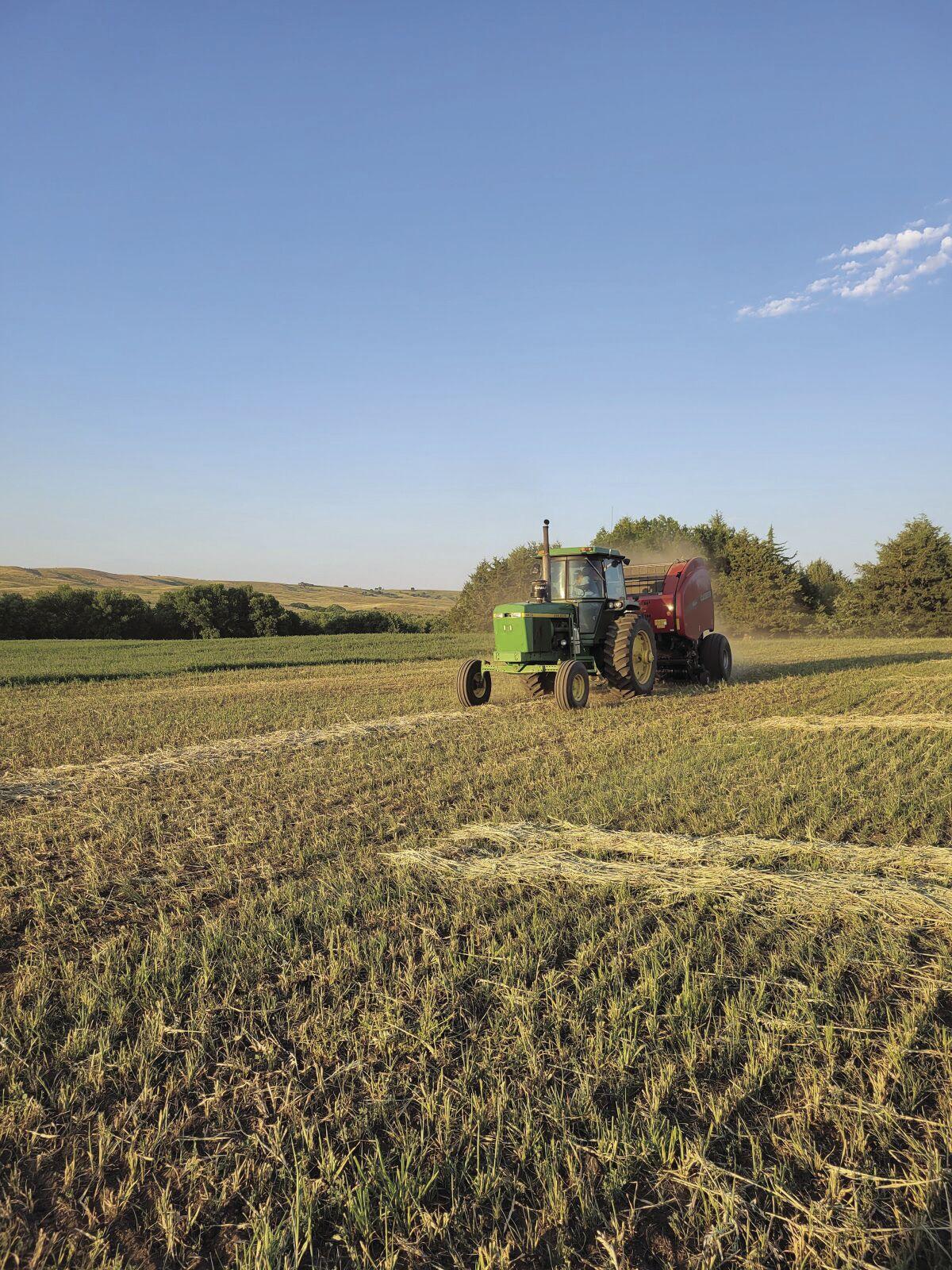 Oats are baled on the Hipke farm after a dry growing season. 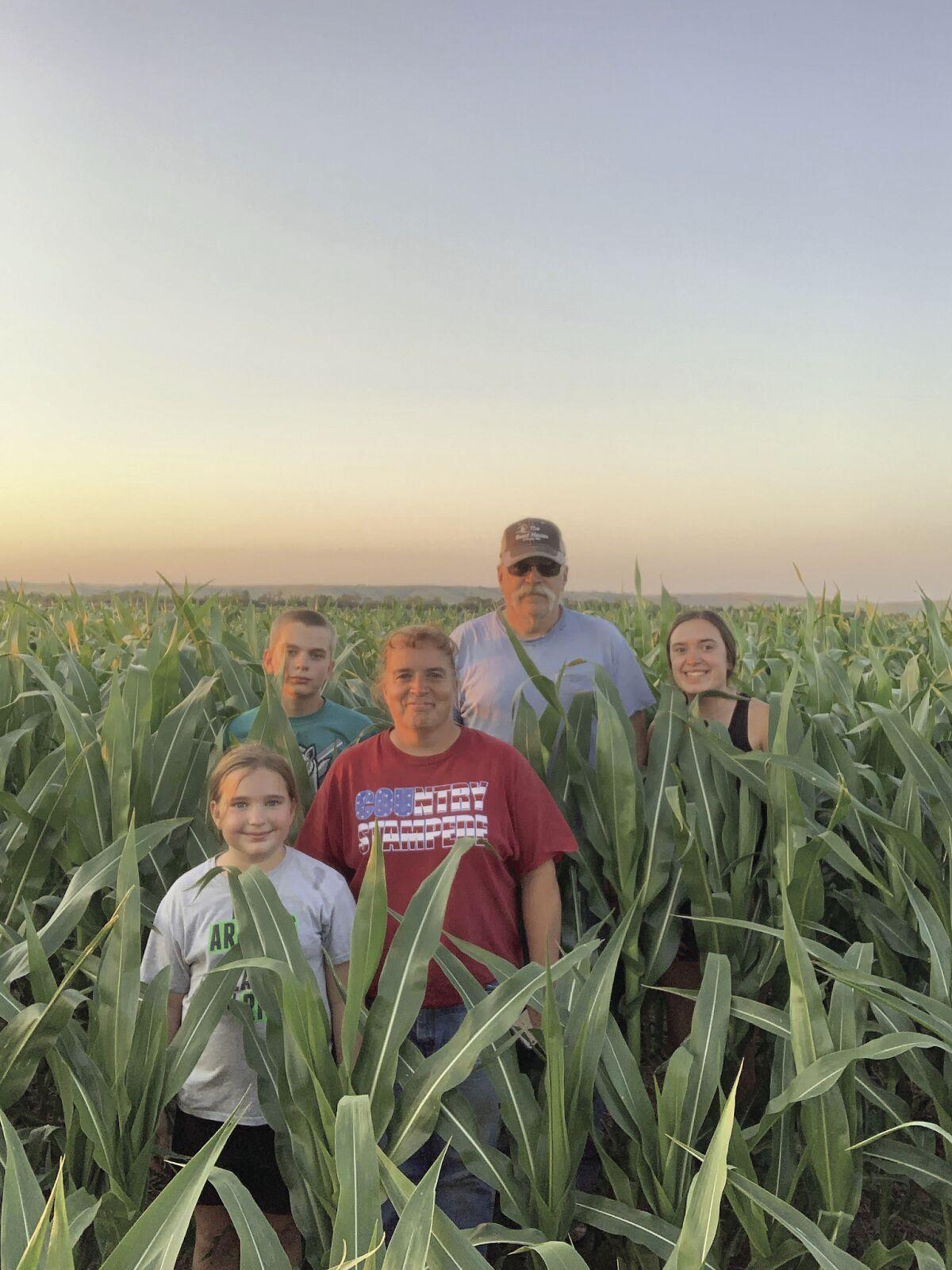 The Hipke family poses for a “knee high by the 4th of July” photo while out checking pivots.

On Wednesday, June 23, around 6 p.m., a storm moved in with dry lightning. My dad was out checking pivots when he saw a lightning strike toward the west and right after the strike, he saw smoke. I was still in Spencer at work, my mom and brother were on their way back from a sale in Verdigre, so it was just my dad and my little sister home. My dad quickly went back to the house, picked up my little sister to take her over to my grandparents house, and went to the fire.

He is on the Spencer Volunteer Fire Department, so he called dispatch and told them that in 15 minutes the fire burned a mile and a half. The 55-60 mph winds made the fire almost impossible to fight. By the time my mom and I got back to our place, the fire was huge and there was still lightning everywhere. My dad called my mom and told her to hook the tractor up to the plow and tell grandpa to hook up his plow too. Once that was done, we grabbed a couple shovels and went to the top of the hill to watch for more fires.

The wind died down after a while, which was relieving. Then we got a call from Dad, saying that one of the fire trucks had broken down and they needed tools. So mom and I headed to the fire with tools and a water jug. While we were working on the fire truck, back-up came. Wagner, Lake Andes, and Ravinia showed up to help around 9 p.m., which was another big relief.

Mom and I were busy for the next three hours taking tools and supplies to the firefighters. Finally at midnight after some moisture, Dad called us and said his crew was heading home as the fire was down in a river bottom and they couldn’t get to it. In total that fire burned 6,600 acres and about 30 head of cow-calf pairs were lost. We are very, very fortunate that none of our pasture was burned and all of our cows were safe that night.

We have been happy to hear that not everyone is as dry as we are. In May we received a total of .55 inch and June we received .8 of an inch. It’s crazy how we can go 20 miles north and pastures will be so green but ours are so brown. We didn’t get any fireworks this year because of how dry it is.

Earlier this week we started to put up our dryland oats and alfalfa. The windrows look pretty pitiful. Since the oats got really dry, Dad has to wait for it to have a dew on it in order to finish baling.

We brought our yearling heifers home a couple days ago, so we could sort off the bull, a lame heifer, and my two heifers that I will show in the fair. Last year, I was really good about working with my livestock earlier in June, but this year I am just getting started. This year for cattle, I am going to show two senior breeding heifers, two junior breeding heifers, and a cow-calf pair that will also give me a stocker feeder. I will also have three market hogs and a yearling ewe.

If someone would have told me a year ago that I would be writing articles for the Midwest Messenger, I would have told them that they were crazy. I never saw myself doing something like this but here I am. Almost all the credit for this goes out to my grandpa. He was the one that showed me the advertisement and told me to apply for it. Grandpa and grandma would ask me every weekend if I had applied for it yet. When I started writing, I didn’t really think anything of it, but suddenly people were telling me how they enjoy reading my articles. So I would like to say thank you to everyone who has told me or my family that you enjoy my articles, it truly did mean a lot to me.

In August, I will be attending the Nebraska College of Technical Agriculture in Curtis. I am going to major in livestock management and be a part of the livestock judging team. This is a two-year program and I will enter the workforce after that.

I hope everyone had a fun and safe 4th and it was really fun writing for all of you! - Andrea Hipke

Oats are baled on the Hipke farm after a dry growing season.

The Hipke family poses for a “knee high by the 4th of July” photo while out checking pivots.