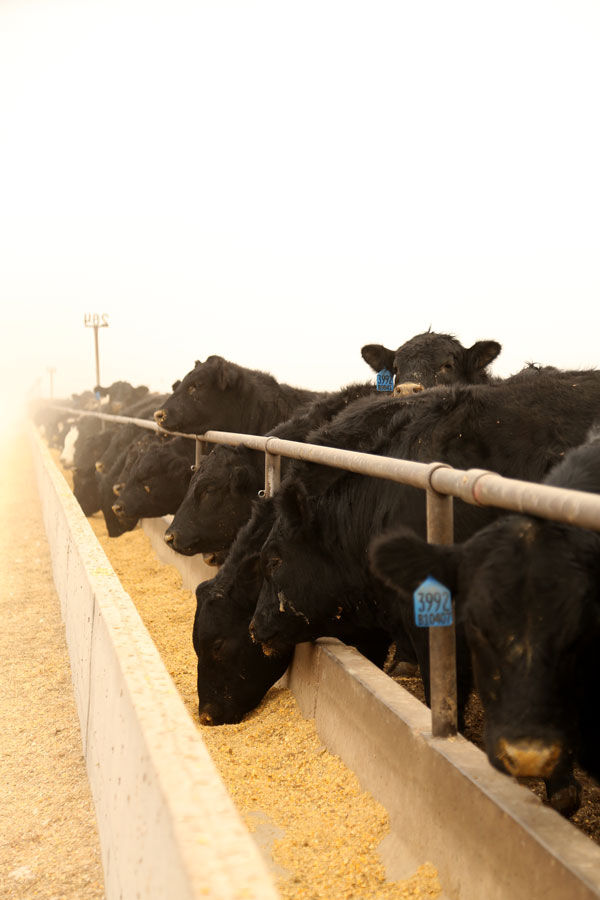 The breed is known for its capacity for good marbling. 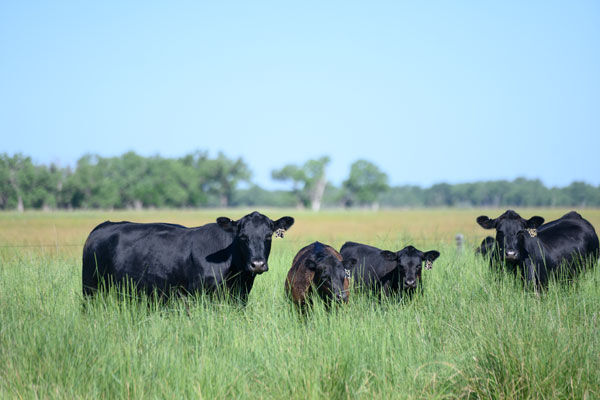 The Baldridge-Tiedeman Ranch raises Angus cattle and markets between 100 and 150 bulls each year for sale by private treaty, plus another 50-100 females for sale in November. 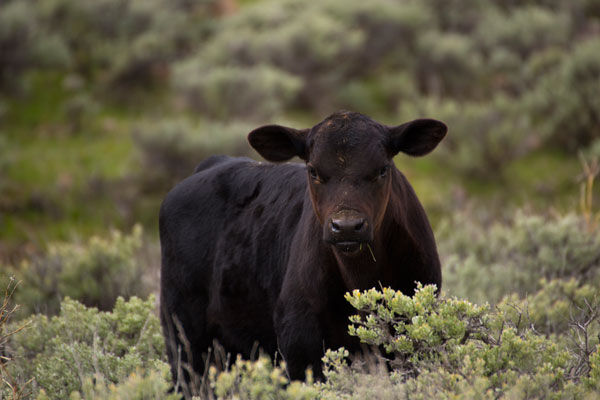 An Angus calf stares at the camera. The breed is adaptable to climates, both warm and cold, around the globe.

Angus cattle are the most well-known breed of cattle in the U.S., and, according to some, the most popular.

The black-hided cattle originated in the county of Angus, in northeastern Scotland, with improvement of the original stock beginning in the last half of the 1700s. Many of the cattle were polled, with a few having horns. They were first called Aberdeen-Angus, and by the early 1800s, the polled cattle of the area (which included other breeds besides Aberdeen-Angus) were highly favored as market cattle for carcass beef.

Hugh Watson of Keillor, who was born in 1789 in Strathmore in Angus, is considered the founder of the breed. He may not have been the first person to improve Aberdeen-Angus, but he was the most systematic and successful. His father and grandfather had been buyers and breeders of Angus cattle, and the family had owned cattle since 1735.

The breed came to the U.S. in 1873, when George Grant brought four Angus bulls from Scotland to Victoria, Kansas. Two of the bulls were exhibited that fall at the Kansas City (Missouri) Livestock Exposition. Because of their solid black color and polled heads, they were considered “freaks.” (Shorthorns were the predominant breed at the time.) Grant crossed the bulls with native Texas longhorns, producing hornless black calves that survived well on winter range. It was the first demonstration of the breed’s worth in the U.S.

As part of the Baldridge-Tiedeman Ranch, he is the third generation in the purebred cattle business and works alongside his parents, Bob and Becky Tiedeman, and his wife, Lindsay.

The Baldridge-Tiedeman ranch has had imported Gelbvieh from Germany, Limousins from France, national champion Red Angus, and Simmentals, but Angus cattle have always been top of the line for them.

“They’re consistent mama cows with good udders,” Tiedeman said.“You can find Angus genetics to match any environment. Angus cattle thrive in Florida in the humidity and heat. They also work in the high desert country of Nevada and everywhere in between, with proper selection pressure. That’s the beauty of the breed.”

The breed’s temperament is calm, too, he said.

“I think Angus cattle are good to be around. The average age of ranchers and cattlemen is increasing, and with that, goes an increased demand for docility,” Tiedeman said. “Docility has been proven to help throughout the rest of the production system, through efficient gains in the feedyard and increased fertility in getting those females bred back.”

Angus also contribute to quality cattle through heterosis, he said.

“If you’re dead set on a cross breeding plan, I think Angus has to be in the mix, because of the black hide, the marbling and convenience traits that come with Angus genetics,” he said. “If a single breed is more convenient for you, you can find Angus genetics to match any marketing goal you have for yourself.”

The Certified Angus Beef program has brought high quality beef to the public since 1978. A program of the American Angus Association, CAB “has done an incredible job of creating demand and providing a consistent, juicy eating experience for beef consumers throughout the world,” Tiedeman said. It’s created an even stronger market for Angus cattle, with 1.25 billion pounds of CAB beef marketed in 2019, and over $1 billion in CAB beef sold yearly.

It’s also created premiums for producers, with $92 million in premiums going back to the producer last year, said Levi Landers, the Nebraska representative for the Association.

“Our slogan is the business breed,” Landers said. “We have the largest branded beef program in the U.S. (the CAB). When people get a CAB product, they know it will be tender, very flavorful, and every time they get it, it will be the same consistency as the last time they bought it.”

When he was a youngster, Tiedeman was involved in the junior programs provided by the Association, and he credits those programs with lighting the fire for young people to be involved with the Angus breed.

“We grew up showing,” he said. “My first National Junior Angus show was in 1993, and I was addicted every year thereafter.”

The opportunity to make friends, meet new people, and network was what he enjoyed.

“I absolutely loved it,” he said. He served on the National Junior Angus Board of Directors from 2004-2006. Last year, the Association gave out more than $227,000 in scholarships for youth.

Every beef breed has traits they excel in and traits that are deficiencies, said Dr. Matt Spangler, Nebraska Extension Beef Genetics Specialist.

“Angus cattle, in terms of yearling weight and carcass weight are among the heaviest, and they have an advantage in marbling,” he said. “But there is also published research that suggests they consume feed to a greater degree than other breeds do, and mature cow weight is heavier.”

That research has been done utilizing data from the U.S. Meat and Animal Research Center near Clay Center, Nebraska.

“In totality, those aren’t necessarily bad things and they’re not necessarily good things,” Spangler said. “What those objective breed differences tell me is that cattle producers need to be aware of current breed differences, to use that knowledge to inform their breed choices and breeding programs. No one breed excels in every trait that impacts profitability. There is an advantage in utilizing multiple breeds.”

Landers loves the breed for its versatility.

“They adapt very well,” he said. “Their durability and fertility make them a mainstay in the beef industry.

“They can be used in any situation. They’re very diverse. Whatever your scenario is, Angus genetics will get you to the top.”