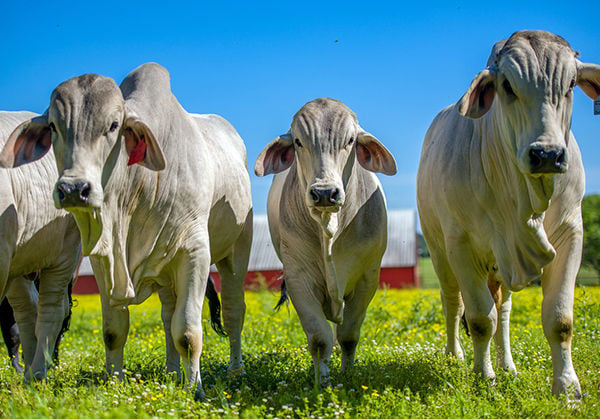 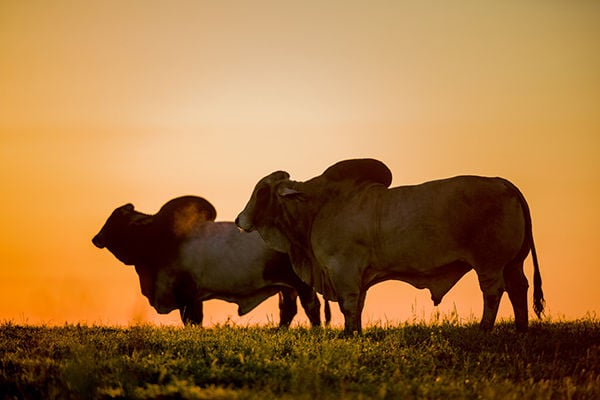 Brahman cattle are easily recognized for their distinctive hump and large ears. 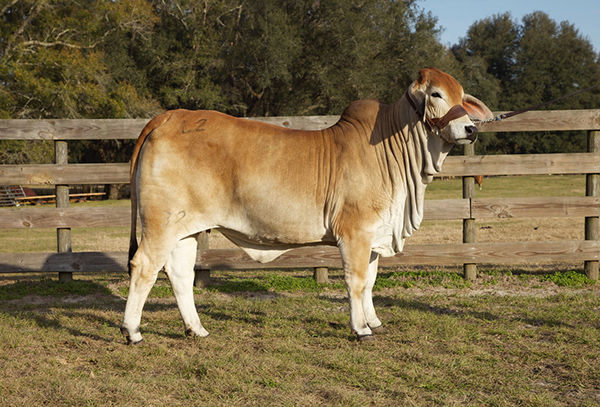 Brahman cattle are easily recognized for their distinctive hump and large ears.

Brahman cattle are easily recognized among the cattle breeds for their distinctive hump.

Originating in India, the Bos indicus cattle are the “sacred” cattle of India, with Hindu believers not permitting them to be slaughtered, sold or eaten.

Brahmans were imported to the U.S. in 1849, to Dr. James Bolton Davis of South Carolina. Their descendants spread throughout the South, but their identity was lost during the Civil War. In 1885, two “Indian” bulls were imported to J.M. Frost and Albert Montgomery of Houston, Texas. Eventually, the American Brahman was developed from the Indian breed, including the Guzerat, the Nellore, and the Gir. The Krishna Valley strain was also used, to a lesser extent.

Brahman cattle have the unique hump located over the top of the shoulder and the neck. They are also known for their horns, which usually curve upward, their ears, which are large, and their throatlatch and dewlap, which have a large amount of extra skin.

They thrive in hotter climates which make them ideal for the beef producing regions of the world close to the equator.

“In order to function in those areas, cattle must have some degree of Brahman blood,” said Carlos X. Guerra, a long-time Brahman cattle breeder from Linn, Texas.

But they’re ideal for more than heat tolerance, Guerra said: “They’re up there for their heat resistance, but they also offer longevity, quality milk, insect resistance and carcass merit.”

He says it’s not uncommon for a Brahman cow to stay in production until her late teens or early 20s, and they are docile as well.

“If you want to turn a Brahman herd into pets, you can make them all pets. I don’t know of any other breed where you can say that,” said Guerra, whose grandchildren show Brahman cattle.

Guerra calls the breed “cross breeding’s common denominator” for the southern third of the U.S. They are often crossed with Simmental, Shorthorn, Angus and Red Angus cattle.

“In this part of the world, the tiger striped cow, which is half Hereford and half Brahman, tops most replacement sales,” he said.

In the southern part of the U.S., Brahman are more often crossed with Herefords because there are more Herefords in the area. The crosses “are very productive,” he said. Herefords aren’t the only good cross; any Continental or British breed works.

“There are some F-1s that are half-Holstein, half Brahman that make phenomenal recipient cows,” he said.

Part of their ability to handle heat is due to the fact that they sweat more than other breeds. Brahmans also secrete an oily substance in their sweat that is supposed to repel insects better. Studies at the University of Missouri have found that Brahman cattle show little effect from temperatures up to and beyond 105 degrees F. Their short, thick, glossy hair, combined with loose skin, which is thought to increase the surface area and help with cooling, makes them heat tolerant.

They are good mamas, too, Guerra said: “One thing about a Brahman mother cow is that she is very protective when she has a baby. There won’t be a lot of coyotes eating Brahman veal.”

They also seem more intelligent than other breeds.

“What one does, they all do,” Guerra said. “If there’s a hole in the fence, they’ll all jump through it, one by one.”

Three-quarters to purebred Brahman steer calves are docked 10 to 30-plus cents per pound at auction barns, he said – about the same percentage of heavily-influenced Brahman steers that can be found in 75% of the pens in South Texas feedlots, as that cheapens input costs. This is often the feedlots’ profit margin at the end of the feeding period.

These producers make up for the discounted prices on steers when their commercial purebred Brahman heifer mates are sold, as they top the market and may bring a premium in excess of $1 per pound above market, as producers buy them to breed to Bos Taurus sires to produce the popular F-1 replacement heifers, which have been proven to optimize weaning weights when bred to a third breed sire.

Guerra’s family began farming and ranching in south Texas in 1873 when his great-grandmother came as a widow from Mexico with her three children, looking for a better life. Guerra’s father, Rafael, and his uncle bought registered Brahmans before Rafael enlisted as a soldier in World War II. While Rafael was away at war, his brother, busy with cotton gins and farming, sold the cattle.

When Carlos was 11, he showed a Red Angus bull calf named Pancho, which was the beginning of his life as a cattleman. Guerra Bros., which included Guerra and his family, crossed Brahmans with Red Angus in the 1960s to make Red Brangus. In the mid-80s, they crossed their Brahmans with Simmental and F-1 Simbrah to make Simbrah cattle.

In 1989, Carlos, his wife Sister, and their four children bought the Guerra Bros. Cattle, which included the La Muneca brand, and have been breeding registered grey and red Brahman cattle ever since, most of which are polled. Doing business as La Muneca Cattle Co. and La Muneca Ranches LLC, they have sold their cattle coast to coast, in many countries and to several continents.

Guerra is pleased to extol the benefits of Brahman cattle.