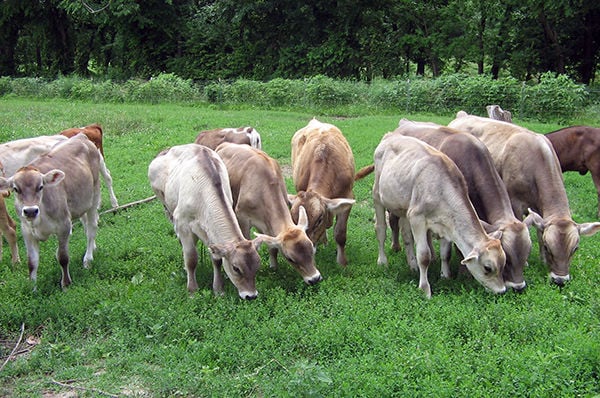 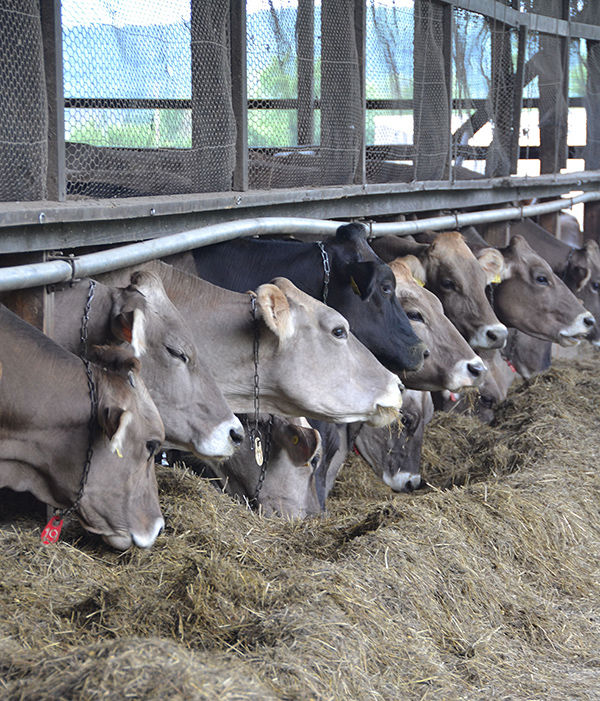 Brown Swiss were first imported to the U.S. in 1869 and are noted for their high component milk, with higher percentages of fat and protein, which makes it desirable for cheese-making.

Brown Swiss were first imported to the U.S. in 1869 and are noted for their high component milk, with higher percentages of fat and protein, which makes it desirable for cheese-making.

The gentle, beautiful eyes of Brown Swiss cattle are one of the things people notice first about the dairy breed, and it’s what attracted Calvin Nisly to the cattle, growing up on a dairy farm near Partridge, Kansas.

The breed is known for its ability to produce high-component milk, with higher percentages of fat and protein compared to the Holstein breed.

Brown Swiss cattle originated in the Swiss Alps about 4,000 years ago. Their history is largely unknown, but it is thought they developed from Braunvieh cattle, and even in Germany today, they are referred to as Braunviehs, which means “brown cows.”

Agriculture in Switzerland was not advanced or improved until the 1800s, when land was fenced and crops of turnips, beets and improved hays were introduced. This improved the feed supply available for cattle, and farmers became more interested in breeding more productive cattle. At the same time, improvements in cheese manufacturing came about, which created a market for more milk.

The first Brown Swiss cattle, a bull and seven pregnant females, were brought to the U.S. in 1869 by a farmer in Belmont, Massachusetts. Thirteen years later, 19 cows were imported to Wethersfield, Connecticut. From 1882 to 1892, five more importations took place.

Nisly and his wife, Andrea, milk 70 head, and love the breed for several reasons. The first that comes to mind for Nisly is their temperament.

“Brown Swiss, compared to other dairy breeds, are very docile, very even tempered,” he said. He remembers the breed in his dad’s dairy barn. “Us kids always really loved the Swiss because they were so tame and we could pet them. They were like friends to us.”

Brown Swiss are the second highest dairy breed in terms of milk production, after Holsteins.

However, the quality of their milk is better compared to Holsteins. The breed’s protein and butterfat percentages are higher than Holsteins, which gives Nisly a premium. Average butterfat for a Holstein is about 3.8 percent; for Brown Swiss, it’s 4.5 percent. For protein, a Holstein’s percentage is 3.0; for Brown Swiss, it’s 3.5 percent. The breed yields fewer pounds; Holstein average annual yield is 23,000 pounds, where the Swiss is 21,000, but the premium is worth it, Nisly said.

“On average, I get $3 more than a Holstein guy, per hundredweight,” he said.

The scientific reason for the higher protein and butterfat content is the uniqueness of Brown Swiss milk. It has longer-chain fatty acids than other popular dairy breeds, and smaller fat globules in the cream, which means that the cream rises more slowly in the milk — ideal for making cheese.

Drinking milk in the U.S. has become less popular, but the popularity of cheese and butter has risen, making the breed’s protein and butterfats more valuable.

Another advantage to the breed is that the milk can be consumed by people with protein allergies. Those allergic to milk are not always allergic to the lactose; sometimes it is the A1 protein in the milk that causes the allergy. About 70% of Brown Swiss cattle have A2 protein, which makes their milk more digestible by people who are allergic to the A1 protein. With genomic testing, some dairies around the world are producing milk with A2 protein only.

One of the few drawbacks to the Brown Swiss breed is that their calves are harder to start on buckets. Bottles are OK, Nisly said, but buckets can be a problem.

The breed also has a reputation for not eating if they’re not hungry, said Norm Magnussen, executive secretary of the Brown Swiss Cattle Breeders Association of the U.S.

“If a Brown Swiss calf has a belly full of warm milk from its mother, it may go a day or a day and a half before it eats again,” he said.

Conception can be an issue, like it is in all dairy breeds. But it is being addressed through genomic testing, Magnussen said.

Swiss Browns are towards the top of the dairy cattle when it comes to longevity. The oldest cow in the Nisly herd is 15 years old.

The Nislys have a free stall barn and graze their cattle on rye when possible. They feed corn silage and rye silage. Calvin and his wife do the milking in the morning. In the evening, he and one of his two children still at home, Juliet and Jasper, milk. They have an older daughter, Lucia, who is a college student in Denver, and had a son, Matthew, who passed away a few years ago.

They farm about 300 acres, double cropping corn and rye, grazing the rye and chopping it in the spring for rylage. They also raise hay and triticale.

Nisly loves the beauty of the breed, as do other people.

“Often people who first meet them are taken over by their beautiful brown eyes,” he said. “I confess that’s part of the reason I like them so much.”

He remembers his dad never preferring the Brown Swiss as much as his kids did, and they hated it when the Swiss were sold. His dad “accused us of making a sacred cow out of them because we raised a fuss when he took them to market.”

Brown Swiss are often crossed with other dairy breeds like Holstein and Jersey. The Brown Swiss Association created the first herd book in 1880. The animals registered in that herd book are descendants of about 150 head imported from Switzerland.

Today, there are about five million Brown Swiss worldwide.