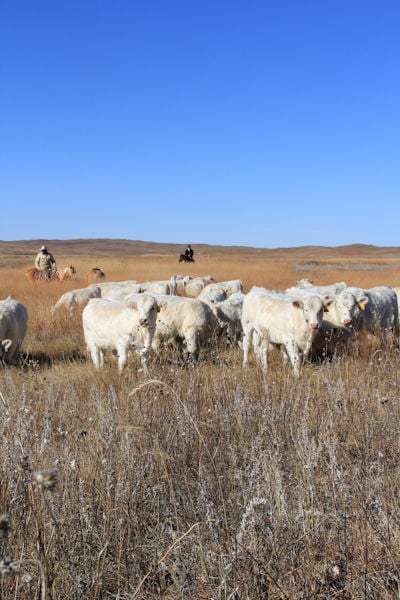 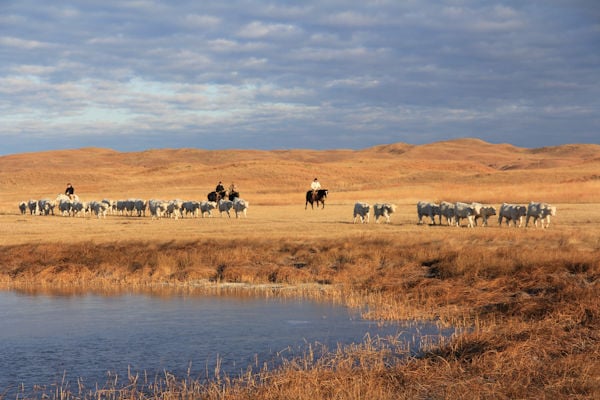 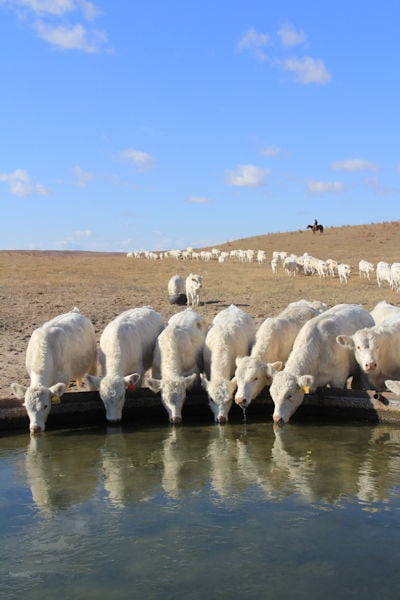 Charolais cattle are easy to spot because of their white hair.

The breed originated in France in the Charolles province, with legend having it that the white cattle were noticed in the area as early as 878 A.D. By the 1500s, they were popular in French markets, but were confined to France until after the French Revolution, when they moved into other areas of France and after World War II when they moved across the globe.

The breed came into the U.S. from Mexico in 1934, when a young Mexican industrialist of French ancestry, Jean Pugibet, brought some of the cattle to his ranch in Mexico.

The animals, like most continental and British breeds, were raised not only for meat and milk, but draught as well, and the French stressed rapid growth and large size.

Charolais cattle are white with a pink muzzle and pale hooves. They are long bodied and good milkers, have a short, broad head and heavily muscled loins and haunches.

Brent and Marykae Broberg are the second generation to raise Charolais on their farm near Tilden, Nebraska. Brent’s dad, Loren, started with the distinct white breed in 1981.

“The first thing people think about when you talk Charolais is growth,” Brent said. “They are a good terminal cross breed. We always tell people if you want free pounds, breed Charolais. They’ll put the growth in those calves.”

Broberg, who has an annual bull sale the second week of February, said many of his customers buy purebred Charolais bulls and cross them on another breed. The bull provides the fast growth, “and you’re off and running,” he said. “If you have the good genes and have somebody to give you good feed, you’ll get there faster than somebody who doesn’t have those things. You put a white bull on a Red Angus cow and there’s not a better cross than that. Those calves flat-out grow.”

The breed is also known for its longevity. Sometimes bulls are called “disposable” because they only last three or four years. Broberg said his customers say their Charolais bulls are good for eight or nine years before they are ready for retirement.

Charolais may have been known in years past for being wild, but that’s not the case anymore, Broberg said. A good disposition “is one thing we take pride in,” he said. “If you can’t work with them, you just as well not have them. And we don’t want to get people hurt.”

Wild cattle can be found in any breed, he said. It depends on their care and how the producer handles them.

The white hair is an advantage on hot summer days in the feedlot. Broberg saw this firsthand during his high school years, while working for a veterinarian and visiting feedlots.

The Brobergs calve in both the spring and the fall. Their first calving season is April and May, with the second set calving in August and September. They have found that their older bulls, both the 22-month-olds from spring calving, and the 18-month-olds from the fall calving, sell better, as customers can see how the bull is filling out and the bulls are more mature and ready to breed.

Brent and Marykae’s three daughters — Karlee, 13 years old, Miley, 9, and Sadie, 7, show Charolais at the local fair. The white cattle require lots of washing, sometimes 80 or 90 days in a row to prepare for the fair, Broberg said. It’s harder to hide mistakes in white cattle, compared to a black one.

Once, while accompanying his daughters at the county fair, Broberg said a woman and her son walked by, inquiring how they kept the cattle so white. Broberg explained that the cattle are washed 90 days consecutively, and the woman turned to her son and said, “See, 90 days of taking a bath.”

“I think that poor kid hates me,” Broberg laughed.

Broberg and his dad run about 300 head of Charolais with some Red Angus. They AI the first calf heifers and breed the cows with bulls on foot. They also raise hogs, and five years ago, began raising African night crawlers for the worm castings, which are sold as organic fertilizer.

“The Lord has blessed us,” Broberg said. “We put him first and foremost in everything we do.”