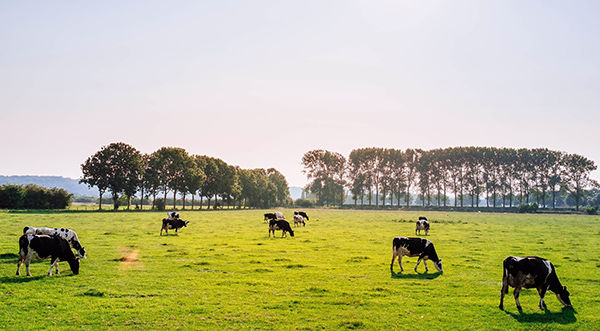 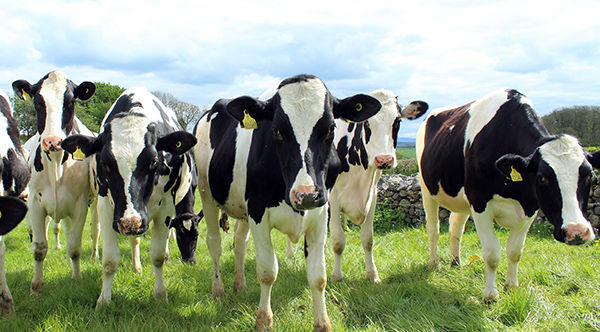 If you enjoyed a glass of milk or a scoop of ice cream today, it most likely came from a Holstein cow.

Holsteins, with their widely recognized black spots on white coats, are the “workhorse” of the dairy world.

About 90% of U.S. dairy herds are made up of Holsteins, a breed known world-wide for being the highest-producing of all dairy cows.

Holsteins were imported to the U.S. in 1631, but due to crossbreeding, the bloodlines were lost.

In the 1850s, the animals were introduced again, to Massachusetts. They died, due to illness, but the farmer was so impressed with them that he imported a bull and four cows in 1861. Other farmers, seeing the quality of the breed, also imported Holsteins.

In 1872, the first herd book was published, containing the pedigrees of 182 Holstein cattle.

Lowell Mueller, a dairyman from Hooper, Nebraska, has been in the Holstein business since he showed them in 4-H more than 50 years ago. In fact, there’s been a Mueller on the farm, milking dairy cows, since 1867, when Lewis Mueller, Lowell’s great-great-grandfather, settled there.

For Mueller, as for nearly all dairy producers across the U.S., Holsteins are productive.

Steve Peterson, national sales manager for the Holstein Association USA, concurs: “They are popular for their volume of milk, feed efficiency, productivity, and the profitability they bring to dairies.”

The average Holstein at Viview Farms, where Mueller and his wife Lois live and work, produces between 70 and 75 pounds per day. That works out to more than 23,000 pounds per cow, per year, which is nearly nine gallons of milk per cow per day. The Muellers milk twice a day, while some dairies milk three times a day.

The animals are docile, he said: “You can go in my freestyle barn and walk in between the cows and not be bothered. In fact, some would come up and want to lick you.”

Being among the calves as they are raised makes them more comfortable around humans. Cows with calves can sometimes be aggressive, but not Holsteins.

“They are more trusting. They know you’re going to take care of them,” he added.

As research and science have progressed, so has knowledge of the breed and care for it. Due to better genetics and more research, Holsteins produce more milk now than years ago.

“We’ve been able, through genetics, to increase production substantially,” Mueller said. “We’ve almost doubled what it was 40 years ago.”

It’s more than genetics, too.

“Better feed and better housing have increased production. We’ve learned a lot about nutrition and how to care for them. Cow care and cow comfort is the key,” he added.

The dairy market has been challenging for the past four years. Part of that is due to the research that has been done with the breed.

“We’ve become so efficient that we produce more (milk),” Mueller said. “We’re working ourselves out of a job by being efficient.”

The consumer market has changed, too. Milk consumption has slipped, but the need for total milk solids has increased, due to a shift in how dairy products are consumed. The average consumer used to buy milk by the gallon and drink it with meals, Mueller said.

“Now people don’t sit down and have meals at the table,” he said.

More people are on the go, and a lot of dairy production has moved to single-serve foods. Cheese consumption has increased, as has yogurt.

“There are other ways for consuming dairy products other than whole milk,” Mueller said.

One of the strengths of the Holstein breed lies in genetics. Through the Holstein Association USA, dairy farmers can choose to classify their cattle. Every seven or 14 months, someone from the association type evaluates Mueller’s cattle, scoring them on different traits, such as good feet and legs and a good mammary system. Mueller can use the scoring to make decisions about keeping higher-scoring cattle.

Sexed semen is also available for purchase, with a 90% female rate. That allows for faster genetic improvement.

One advantage to the Holstein breed, said Peterson, is the large amount of genetics available.

“There’s such a vast amount of genetic ability to improve the cows, because there’s a bigger gene pool to work from,” he said.

Each of Mueller’s cattle is registered. Dairy producers were one of the first groups of cattlemen and women to keep records and use computer technology.

“It’s always been important for us to keep records,” Mueller said. “That’s how you improve your breed, when you know the bloodlines.”

The Holstein Association, which got its start in 1885 in Iowa City, Iowa, before moving to Vermont, is the world’s largest dairy breed association. It has over 20,000 adult members and 8,000 junior members.

The association focuses on the consumer, always working to educate them.

“We are always aware of the consumer,” Peterson said, “what they want, and how to present the products to them. That is a constant challenge, especially when so many consumers are so removed from agriculture. A lot of them think the milk comes from the grocery store.”

The association has a program called the Young Dairy Leaders Institute (YDLI). It’s an annual project for young people from around the world, working in the dairy industry, to develop their communication skills. Over a two-year period, YDLI students go through three phases: Phase 1, to learn how to be advocates for the industry and communicate with consumers; Phase 2, where students implement their plan at home, and Phase 3, when students return to the Institute to report on their success and failures.

“It builds a network for those people, to work together and to get that constant truthful message out there,” Peterson said.

“A lot of our members today came up through those programs when they were young,” Peterson said.

Three states – Wisconsin, New York and Pennsylvania – have the most Holstein Association members. As the industry changes, the dairies have gotten bigger and some of them have shifted to the southwestern region of the U.S.

For Mueller, he loves his Holsteins.

“I’ve always felt like they were probably the most efficient, productive cow on the planet. I’m not putting down beef cattle, but they might gain three or four pounds a day in the feedlot. My cows will produce six to seven pounds of protein and solids every day. They’re really very efficient animals.

“Holsteins are very dear to my heart. I wouldn’t want to have any other breed.”

Interesting breed fact: Holstein cattle have distinctive black and white markings, but may also be red and white (caused by a recessive genetic trait).